One of the strengths of the Japanese Studies Collections at the Ohio State University Libraries is an extensive collection of  works and rare publications by world-acclaimed author TANIKAWA Shuntaro ( 谷川俊太郎). Tanikawa is Japan’s preeminent contemporary poet whose work has won over ten literary awards and can be found in Japanese textbooks across the nation. In addition to being a poet, he is also an acclaimed translator, picture book writer, and scriptwriter.

Much of Tanikawa’s work has already been translated and published in English, including his Floating the River in Melancholy, for which he won the American Book Award. His work in translating children’s literature, including Charles Shultz’s Peanuts comic strip, Mother Goose rhymes, and Swimmy by Leo Lionni,  garnered him a nomination for the Hans Christian Andersen award in 2008.  His worldwide stature and presence in literature has also made him a perennial contender for the Nobel Prize in Literature. 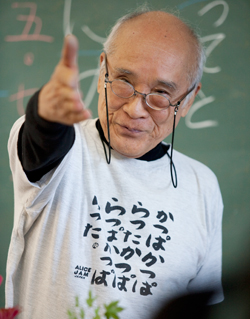 Shuntarō Tanikawa, 2015 by Círculo de traductores is licensed under CC0