Asadoya Yunta (安里ユンタ or 安里屋節) is one of the most widely performed Okinawan songs in recent music history.  The song originated from Taketomi Island in the Yaeyama district of Okinawa, Japan. It tells the tale of a young and beautiful peasant woman named Kuyama Asato (安里クヤマ) and the advances of a government official. The version wide-spread in Okinawa has Kuyama refusing the official as she felt the stability offered by marrying a local man was better than the luxurious but short-lived lifestyle of a mistress. However, in the Taketomi Island version, Kuyama ended up becoming the official’s mistress.

END_OF_DOCUMENT_TOKEN_TO_BE_REPLACED

The Ainu are the indigenous people of Japan, who now reside primarily on the island of Hokkaido. Ainu culture can be traced back hundreds of years. During their long history they developed their own unique music, singing styles, and musical instruments. 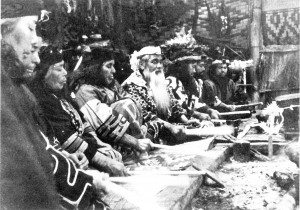 Yukar performed around a fireside from “Songs of Gods, Songs of Humans” by Donald L. Philippi

Yukar (ユーカラ) represent a form of Ainu storytelling. They are epic poems performed using a distinctive chant-like voice, and are generally performed without musical accompaniment. Yukar can be further divided into yukar of human heroes (英雄叙事詩) and kamui yukar ( カムイ・ユカラ) which are tales of gods and spirits.

Imekanu (イメカヌ also know by her Japanese name 金成 マツ) is a well-known yukar performer and transcribed yukar poems along with her niece Yukie Chiri  (知里幸恵).  Recording of Imekanu’s yukar performance are available through Rekion by using 金成イメカヌ as the search term. Below are a few examples : END_OF_DOCUMENT_TOKEN_TO_BE_REPLACED

October 9, 2015 / Cameron Clark / Comments Off on Focus on Rekion: Jazz Music in Japan

There is some uncertainty about the beginnings of jazz music in Japan, but some believe it started with an increase in luxury liners between Japan and the western coast of the United States. These liners were equipped with orchestras and bands that played for the passengers, and often this included jazz music. Passengers whose interest had been sparked would purchase records and sheet music at various ports of call during their travels. END_OF_DOCUMENT_TOKEN_TO_BE_REPLACED 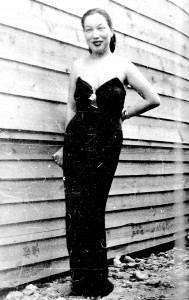 Noriko Awaya in her fifties. From 「淡谷のり子：わが放浪記」

Awaya Noriko (淡谷のり子) was a Japanese soprano and blues singer born in Aomori, Japan on August 12, 1907. Because her family was quite wealthy, she was able to go to school for a time at Toyo Conservatory of Music (東洋音楽学校, present day Tokyo College of Music). However, her father’s business became bankrupt and she was forced to leave school for a year, working part-time as a nude model. Eventually she returned to school, finished her studies, and began her 70-year long career. Her most famous songs include the 1937 hit 「別れのブルース」 (Wakare no burūsu) and 「雨のブルース」 (Ame no burūsu).

Rekion access in OSUL — Noriko Awaya’s popular songs can be found with the following Rekion identifiers:

END_OF_DOCUMENT_TOKEN_TO_BE_REPLACED

Nagayo Motoori (本居長世) (1885-1945) was a Japanese composer known for children’s songs. Although his grandfather and guardian protested, he pursued a music degree at Tokyo School of Music (present day Tokyo University of the Arts) and began working there as a research assistant studying traditional Japanese music. He was well-known for his talent on the piano (for which he served as an assistant professor) but switched suddenly to composing due to a finger injury. During his employment at the university, he taught other important Japanese musicians such as Shinpei Nakayama. END_OF_DOCUMENT_TOKEN_TO_BE_REPLACED 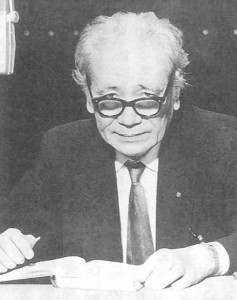 Musei Tokugawa (徳川夢声) was a multi-talented performer known for his silent film narrations, film and radio appearances, as well as for authoring numerous essays and novels.

He was born in 1894 in Shimane prefecture. His career began as a benshi (弁士), or a narrator of silent films. He enjoyed success in this realm until the end of the silent film era. From there, he began appearing in film and television as an actor, as well as storytelling through radio.

Some of Tokugawa’s stories can be heard at the Rekion station at the OSUL Music/Dance Library by searching the following access codes, or by searching 「徳川夢声」. END_OF_DOCUMENT_TOKEN_TO_BE_REPLACED 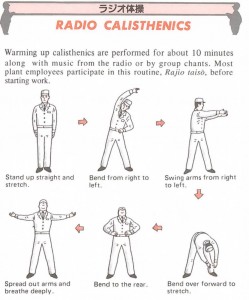 Typical calisthenics routine from Illustrated “Salaryman” in Japan (Click the image for the book in the OSUL Catalog).

One unique characteristic of daily life in Japan is mass participation in morning calisthenics routines. Particularly noticeable are construction workers who can be observed stretching outside at construction sites, but  the routines are also common in a range of spaces from kindergartens to offices.

These radio-broadcast routines were originally brought from the U.S. in the 1920’s, (detailed timeline is available on かんぽ生命 website) but contrary to their American counterparts, the exercises continue to be a part of daily Japanese life.

In 1931, the Radio Taisō Song (ラジオ体操の歌) was released and for many represented the beginning of the day. The broadcasts were banned for a period following the war, but were revived with the addition of a new theme song in 1951.

Rekion includes a very famous recording made at the 1936 Berlin Olympics, when NHK announcer Sansei Kasai (河西三省) abandoned his regular detachment as a journalist to cheer on Japanese swimmer Hideko Maehata (前畑秀子) as she edged out her German rival to win the gold medal in the 200 meter breaststroke event. 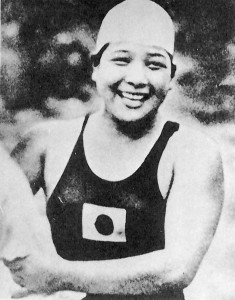 NOTE: This is one of a series of posts highlighting content available in Rekion (れきおん), the Historical recordings collection of the National Diet Library (Japan), which is available at a dedicated computer in the Music and Dance Library at Ohio State.  See the Introductory post in this series for more information about the database.

The sensational Takarazuka Revue began as The Takarazuka Girl’s Opera in 1914 as a way to attract guests to an up-and-coming tourist destination, and 100 years later continues to entertain the imaginations of audiences from across Japan. One of Takarazuka’s most well-known performances was a Japanese language adaptation of the popular revue show, Mon Paris (吾が巴里よ), which became the first revue in Japan. The Revue was named after the city in which it originated, Takarazuka, in Hyōgo prefecture.

Manga artist Osamu Tezuka (手塚治虫), creator of Astro Boy (鉄腕アトム) grew up in Takarazuka and his work was influenced by the theater group, particularly his manga Princess Knight (リボンの騎士) . After Tezuka’s manga gained notoriety, his stories were then adapted into several Takarazuka musicals. For more information about Tezuka and Takarazuka theater, see Tezuka in English by Ada Palmer. 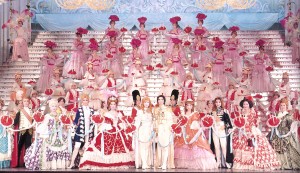 Rose of Versailles ｢ベルサイユのばら」, showing the mutual stylistic influence between Takarazuka and shōjo manga, from 「夢を描いて華やかに：宝塚80年史」.

More information about Takarazuka is available through several resources in the OSU Library catalog. END_OF_DOCUMENT_TOKEN_TO_BE_REPLACED