These papier-mâché toys are part of the collection of Okinawan Folk Art Toys (traditional Ryukyuan handcrafts)  donated by Leon K. and Sadae Yamamoto Walters and also by Robert A. and Shirley Fearey.

Leon K. Walters Jr., an Ohio State graduate (BA ’48 and MA ’53), worked in the U.S. Civil Administration of Okinawa from 1964 until 1972. An avid book collector, Walters collected many rare titles during his time on the island, including books about Okinawan history, dialects, folklore, and literature. The Ohio State University Libraries acquired Walters’ collection of Japanese language resources in 1982, and in the late 1990s Walters donated his English language resources to OSU.

More on Walters’ book collection which is now largely part of the OSU Libraries:

Robert A. Fearey (1918-2004) was Walters’ friend and the U.S. Civil Administrator of the Ryukyu Islands (USCAR) from 1969 to 1972, the last U.S. Civil Administrator before Okinawa’s reversion to Japan. During their stay on the island, Walters and Feareys visited toy stores and collected Okinawan folk art toys. After Walters donated his book collections to OSUL,  he arranged for his family and the Feareys to donate their toy collections to OSU Libraries in 1998.

The papier-mâché toys photographed here were constructed by master craftsman, Shiso Sakiyama (崎山嗣昌). Sakiyama created these works in his spare time while working as the senior artist for an Okinawan lacquerware company. Over his lifetime, Sakiyama personally crafted several thousand of these papier-mâché toys. The popularity of these toys can be attributed to their connection with Okinawan folk tales. Some of the toys were made to look like characters or objects from these tales. Sakiyama enjoyed storytelling, and would play out the tales using his figures as props. Below is a scanned image of Sakiyama’s name card. 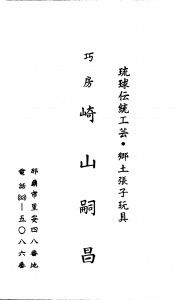 Articles in OSUL on Sakiyama’s craft: