This blog post is part of the Frozen Friday Series, an A-Z journey of the Polar Archives.  Each week, we will feature some aspect of the history of polar exploration with a blog post written by our student authors 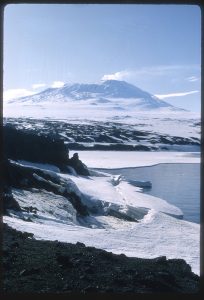 Mount Erebus in Antarctica, as
seen in 1970.

Here at the Polar Archives, our job is to help our users locate primary source documentation on topics that can occasionally be deemed a controversial.   Even if we had opinions on these subjects, we typically don’t share them. However, we are also of the opinion that Climate Change is not a controversial issue. It simply is.  The Polar Archives is a collaboration between the Ohio State University Libraries and the Byrd Polar and Climate Research Center, and as such, we feel that it is our duty and obligation to use our platform to inform. For this Frozen Fridays, we will be focusing on you. We will be presenting you with information about Climate Change, why you should care, and what you can do to help stop and possibly reverse Climate Change.

For the research associated with this post, we contacted scientists at the Byrd Polar and Climate Research Center. For this particular issue, we thought it much more appropriate to contact scientists with doctorates rather than relying on the understanding of an undergraduate studying history (me). We asked them some fairly basic questions about Climate Change. Their responses are summarized by the following. 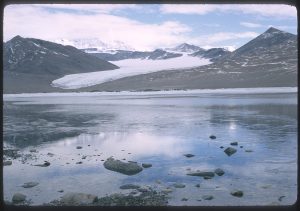 Miers Glacier, seen here with Miers Lake in 1970, is
one such glacier that is at risk of melting.

Climate Change, also known as Global Warming, is the phenomenon in which the global average temperatures over the past century have continually been increasing. In the past one hundred years, the global average temperature has increased by nearly 1.8 ºF. Though that may sound like a small increase to some, Byrd Polar Education and Outreach Director. Jason Cervenec of the Byrd Polar and Climate Research Center points out that “we are currently on track for the planet to warm by another 7.2ºF (4ºC) by 2100.” A jump of that size, Cervenec points out, is the difference between an ice age and a non-ice age.[1]

Furthermore, the jump of just below two degrees has caused numerous ill effects. The most obvious effect is the rising of the sea level. The sea level has increased by eight inches over the past one hundred years. As the Earth gets warmer, so do its oceans. Warmer water expands to take up more space. Additionally, more water is being added to the oceans as ice from ice reservoirs and from both the North and South Polar melts. We have also seen an increase in severe weather events, such as hurricanes, over the past few decades. Here in Ohio, for example, we have seen a seventy-eight percent increase in nuisance flooding since 1951. Ohio is also likely to see lower grain yield and field viability, as well as an increasing need to cool and water livestock as temperature increases.[2] 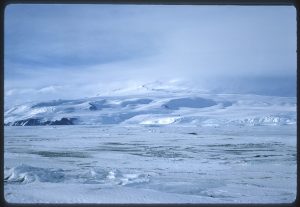 Another view of the snow and ice covered Mount
Erebus, circa 1970.

Although wider societal steps need to be taken to lower carbon dioxide and methane emissions. Cevernec recommends the following steps that individuals can take to help slow down Climate Change:[3]

The Center conducts educational outreach along with its research into the world’s climate. There are several upcoming events, including a Science and Technology Festival and two developmental workshops for educators scheduled for the next two months. Byrd Polar’s website also includes an extensive page filled with educational materials that can be used for either educational or developmental purposes. And as always, the Byrd Polar and Climate Research. Center frequently gives tours to both public and private groups.