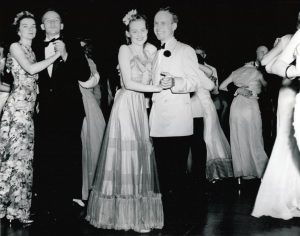 While formal socials and dances aren’t a part of University life anymore, they were quite popular during the early 20th Century as a way to meet people and relax. Formal dances, such as many of the military balls held from the 1900s to the 1950s, were also a socially acceptable way to date.

The formal Spring Dance was a campus wide social, where black tie suits and formal gowns were dusted off each spring for a festive gala. Here, Wesley Leas dances with an unnamed partner, stopping to smile for the camera. Wesley, or ‘Wes’ as he preferred to be called, was the president of the senior class two years later in 1938, as well as being The Best Damn Band in The Land’s drum major. An engineering major, Wes also managed to find the spare time to involve himself in a number of campus organizations and social clubs, such as the American Institute of Electrical Engineers, the Ohio Staters Inc., the Quadrangle Jesters, and the fraternities of Kappa Kappa Psi and Sigma Chi. In spite of this busy schedule, Wes still found time to focus on his studies and find a date to the Spring Dance formal! 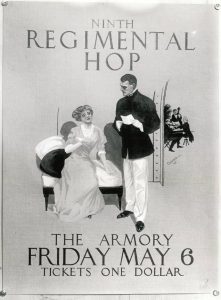 The “Regimental Hop” was a formal military dance held semi-annually at OSU, often a freshman’s first formal dance. The dances were put on by the regiment’s officers, and typically held at the Armory on campus. The first Regimental Hop was held on May 18th, 1906, and by 1910, the dances had become a regular feature of the social calendar. The Regimental Hop was relatively popular, often with 200 or more students buying tickets to attend despite the cost of admission – a $1 ticket in 1910 is about $25 in 2020! 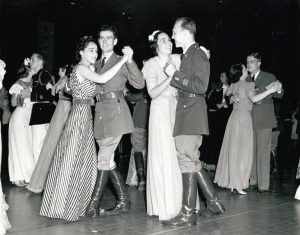 The annual military ball was another popular formal held at Ohio State, which anyone could attend, provided they purchased a ticket from one of the students in advanced military training. Attendance was limited to 1,000, and the tickets were $3.50 for each couple, roughly $62 in 2020! Part of the high cost of attendance for the 1938 dance may have been used to cover the cost of the musicians – $2,000, which The Ohio State Lantern reports was “more than any band has received in the history of the University”. Paying the equivalent of almost $36,000 in today’s money to hire the band is unsurprising, however, considering Hal Kemp’s popularity. The musician had become a popular jazz saxophonist, recording for songs such as “You’re the Top” and “Lullaby of Broadway”, which was a hit in 1935. The military ball was one of the last professional engagements he and his band would play, due to a fatal car crash two years later in 1940. 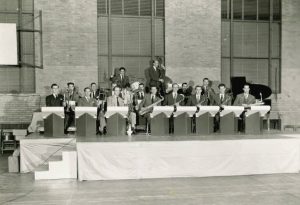 As World War II finally ended in September, 1945, many military “sociables” naturally shifted to the veterans of the war who were finally returning home after years of fighting in Europe and the South Pacific. Veteran’s groups and associations became a fixture of campus life, and one such group decided to form a dance band, holding a contest in April during the All Veterans’ Campus Mixer to determine the name. The 16 piece ensemble, led by Harry Chorpenning, became known as the “All Ohioans” thanks to William Wilson’s winning entry, and included a female vocalist who accompanied some of the pieces. 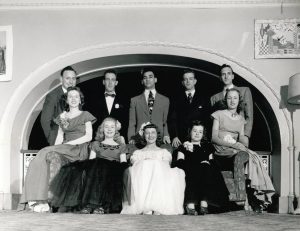 Dances didn’t always center around military officers or campus-wide events, however – some were smaller, more intimate affairs that included members of a sorority or fraternity, members of campus clubs or organizations, or even social groups, such as the Mansfield Club. To be a member of the Mansfield Club, all a student had to do was prove they were from Mansfield, Ohio. The boundaries were later extended to include all of Richland County, in an effort to boost membership. This particular photo was taken during the 1948 February “Winter Whirl” dance, during winter quarter, which included a homey, small town feel in the decorations. Couples danced to Bus Brown’s trio of musicians and refreshed themselves at the bar with bottles of Coca-Cola. The dance ended at midnight, with the song “Home Sweet Home” playing.

Despite the popularity of dances in the first half of the 20th century, university sponsored dances have since fallen out of favor. 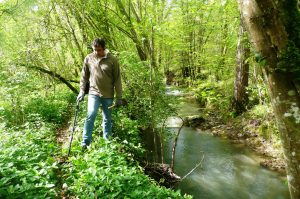 Last spring, the University Archives was contacted by Stephane Renner, a Frenchmen, who said he had discovered an American Soldier’s World War II dog tag while metal detecting in the Rosny sur 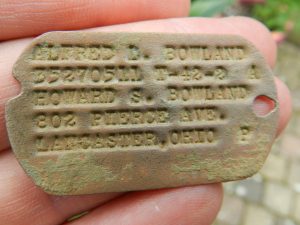 Attached to Renner’s email was a photo of his find: a rusted dog tag that had weathered almost 75 years underground.  Engraved on the tag was the soldier’s name, “Alfred D. Bowland”, and his emergency contact, which was listed as Howard Bowland (which we later found out was his father). 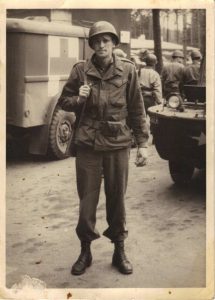 In an effort to find the family, Archives staff utilized Ancestry.com, and also searched through censuses, war registration cards and city directories.  Staff soon discovered that Alfred Bowland enlisted December 9th, 1941, as a result of Pearl Harbor. Bowland survived the war, got married 1947 and had three children.  He passed away in 1995 at the age of 80.

The Archives staff located Alfred’s son, Roger Bowland, to share the news about the identification tag recovered in France.  Soon after, the men in Ohio and France 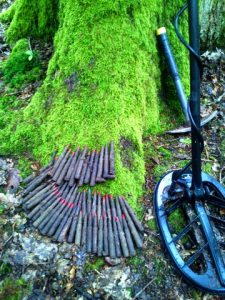 were introduced and connected over the newly discovered dog tag.

Renner sent Bowland the dog tag, along with a coin purse, ammunition and a ration of lemon powder that he also found next to the tag.  In exchange, Bowland sent Renner a photo of his father during his time in the war. Renner keeps the photo on the mantle to remind him of the find.

Veteran’s Day reminds us to thank all military personnel, like Alfred Bowland and his family, for the service and sacrifices they have made for their country. 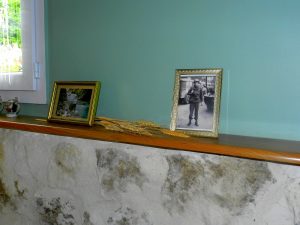 In May of 1928, disaster hovered in the air above France. The Graf Zeppelin, a German airship marginally shorter than the Titanic, ten stories tall and filled with one hundred thousand cubic meters of hydrogen (the world’s most flammable gas) had lost several of its engines. 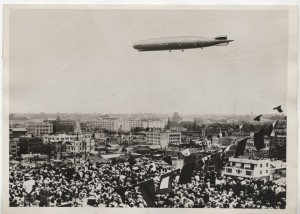 Graf Zeppelin flying over Tokyo on its around the
world flight.

The forward port engine had lost its main shaft and two other engines had immediately seized, leaving the ship floating on its last two engines. In response, Commander Hugo Eckener, a very skilled aviator, tried to return the airship to its base in Germany.   But then a fourth engine stopped, stranding the ship and its passengers with the Alps between themselves and safety. 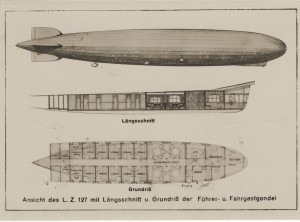 Sketch of the side view and floor plan of the
Graf Zeppelin, reproduced here on a German postcard.

The choice was either to abandon ship, or to attempt an emergency landing in France. To land on the open ground would cause the ship to bounce, unless gas could be released fast enough to prevent it—a major fire risk. Instead Eckener maneuvered the Graf Zeppelin to an old French hangar, where French troops waited. The French helped the Graf Zeppelin to land but immediately locked down the base—“after all, the last Zeppelin landing in France had been a war machine.” [i]  The Graf Zeppelin and its passengers, as well as the two gorillas on board[ii], were saved.

It was an exciting time in the history of flight.  Two years before, Charles Lindbergh had flown from New York to Paris in about thirty-three hours, sparking a huge rise in popularity for aviators and a surge in the public’s interest in flight.  Commander Hugo Eckener and the Zeppelin Company wanted to build upon this fascination by using the Graf Zeppelin to circumnavigate the globe. 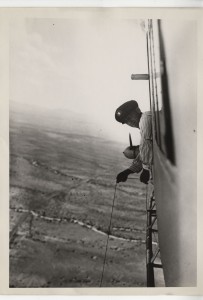 The problem? They did not have enough money. Their solution came from the American news mogul William Hearst. Hearst wanted to capitalize upon the excitement that aviators and grand adventures sparked in the American public and, after some haggling, he offered to fund half of the money for the trip in exchange for the rights to the story in the U.S. and Great Britain. Hearst had three reporters on board: the famous explorer Sir George Hubert Wilkins, Lady Grace Drummond-Hay, and Karl von Wiegand. 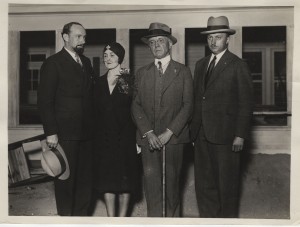 Hearst also demanded that the trip begin and end in the U.S.  Eckener agreed, but planned to travel right back to the Zeppelin’s home base in Friedrichshafen, Germany after beginning in America, allowing for a complete circumnavigation from both Lakehurst and Friedrichshafen (thus satisfying both his home country and his primary sponsor).

This is how the Graf Zeppelin, after its inauspicious trial run in May, came to be traveling again across the Atlantic toward the U.S. on the 1st of August, 1929. Ninety hours after departure, the ship landed in Lakehurst, N.J. before returning to Germany. From Friedrichshafen, the Graf Zeppelin traversed Siberia before landing in Tokyo, Japan, and continuing across the Pacific Ocean to Los Angeles, California. The last leg was a jaunt across the United States, back to Lakehurst. 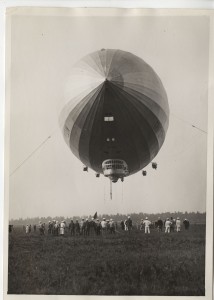 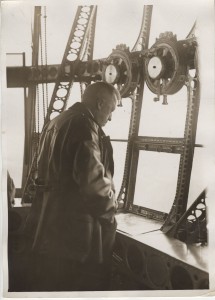 Commander Eckener in the control
room on the Graf Zeppelin.

By this time, the Graf Zeppelin had run out of drinking water, though this did not stop Eckener from pushing forward. Instead the passengers subsisted on wine and other alcohol—substances still illegal on the U.S. soil below their feet. Upon its arrival, the Graf Zeppelin broke the record for the fastest circumnavigation of the globe and was met with massive fanfare and celebration.

George Hubert Wilkins, a famous Australian polar explorer and one of Hearst’s correspondents on the Graf Zeppelin, collected photographs and memorabilia related to the flight. Over two hundred of these images were recently acquired by The Ohio State University’s Polar Archives in 2015 and join the larger Wilkins Collection held by the repository. These images range include mass-printed German postcards; images of life aboard the airship; photos of the Graf Zeppelin in flight or in a hangar; as well as photos of crowds cheering and celebrations.

Wilkins himself is not featured in many images.  He is seen in only a few formal photographs, as well as several that depict him dining with Captain Eckener and his fellow correspondents. The exception is a fabulous photo in which Wilkins is examining a book of photographs in the dining area, with a small dog (one which greatly resembles an early Boston terrier) in his lap. 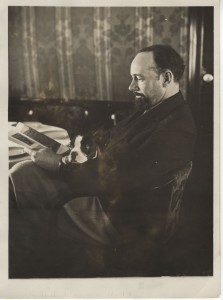 Wilkins, reading, with his dog in his lap.

Such depictions of life aboard the ship are numerous among the collection and cover everything from work to play. There are images of one crew member rather smugly playing the piano accordion; the radio operator Fruend precariously hanging out a window with a dangling wire; Chef Manz cooking; Commander Eckener solemnly monitoring everything on the control room; and Lady Drummond Hay happily climbing one of the gondolas while the ship was in flight. 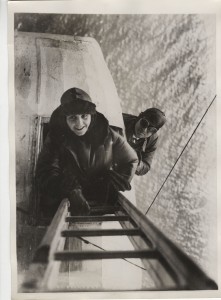 Lady Drummond Hay climbing one of
the gondolas. 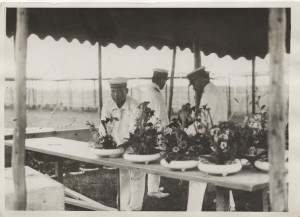 Japanese florists preparing flowers for the arrival of
the Graf Zeppelin.

Finally, the collection has printed memorabilia that Wilkins gathered, mostly postcards and tiny printed cards. These seem to be German in origin, given that all are captioned in German, and display wonderful drawings of the Graf Zeppelin’s plans or of the luxurious cabins and dining areas inside. One tiny image shows the Graf Zeppelin when its frame is only half formed, extending out toward the viewer in a spiral fashion, while unattached parts mimic its swirls on the ground. 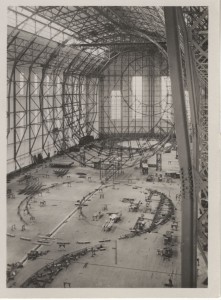 The Graf Zeppelin as it was being built.

[ii] These gorillas inspired one of the passengers, Merian Cooper, to create the movie King Kong.