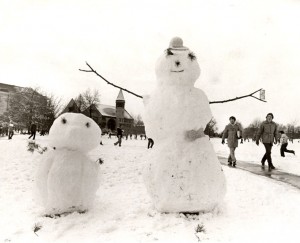 The recent polar vortex that shut the campus for two days serves as a reminder that even the Ohio State University isn’t impervious to the forces of nature. The campus has been closed a number of times for weather-related hazards, but classes also have been cancelled for a variety of other reasons over the years.

1918: October 11-November 12. Were you to travel through time to November 11, 1918, on the OSU campus, you might think classes were cancelled in celebration of the signing of the armistice between the Allied Forces and Germany that marked the end of World War I, but that wasn’t the case. The campus was instead shut down in an attempt to stop the spread of the influenza epidemic.

1968: April 9. Classes scheduled to be held between 8am and 4pm were cancelled out of respect for the funeral of Rev. Dr. Martin Luther King Jr., who was assassinated on April 4 in Memphis, TN. 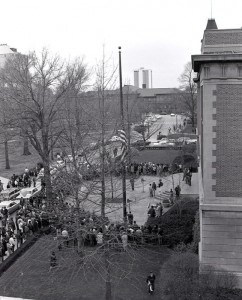 1970: May 7-19. The University closed for nearly two weeks after four students were killed by the National Guard on May 4 at nearby Kent State University. The closure was an attempt to calm protestors on OSU’s campus and was largely successful. Learn more at our web exhibit on the 1970 Student Demonstrations.

1971: February 8. President Fawcett cancelled classes at 3 p.m. due to the 10 inches of snow that had fallen by then. He was quoted in The Lantern as doing so to “allow streets and sidewalks to be cleared so classes and offices can operate normally Tuesday.”

1977: January 18. Classes were cancelled due to cold weather in an attempt to conserve gas and electric resources at the request of Columbia Gas and Southern Ohio Electric. But students didn’t get too much of a break: Cancelled classes were rescheduled for President’s Day. 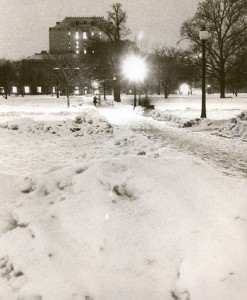 The Oval after the Blizzard of ’78

1977: April 8. All classes scheduled on West Campus were cancelled after an explosion in Scott Hall. The blast was caused by an electrical malfunction and injured a graduate student and a firefighter.

1984: February 28. It wasn’t quite the Blizzard of ’78, but the snowstorm that hit town in late February of ’84 did manage to bring most of Columbus screeching to a halt. In addition to the county offices, courts, highways, and garbage pickups that were shut down for the day, some campus parking garages were closed and classes were cancelled starting at 4 p.m.