September 4, 2015 / mares.12@osu.edu / Comments Off on A bounty of Buckeye-themed goodies, thanks to Trademark and Licensing

It’s likely many of you have never have heard of one of OSU’s most influential offices, but boy, have you sure seen its imprint.

Trademark and Licensing has been around for more than 30 years, “protecting the University’s name and identifying marks,” according to its web site.  It all started in 1982, with a proposal of a program to ensure OSU received a royalty from each sale of OSU-themed merchandise. The program also would regulate which products were allowed to use Ohio State’s trademark, to make sure the University’s image remained unsullied. (By the way, the Libraries receives a percentage of each royalty, so we are particularly grateful for this program.)

Now, vendors who want to use OSU’s  name or logo on their merchandise must undergo a rigorous application process with the Trademark and Licensing Office to get approval.  While the office is strict about its standards, it does approve a wide variety of items to be sold.  We thought we’d take you down memory lane to show what kind of items once adorned the shelves of various retail outlets around town back in the ’80s. The material in these photos is from a collection transferred to the Archives in 1989 by the office.

Our models in the photos were Brandon Abbott, Britain Wetzel and Jimmy Zimmerman. Brandon, a Math major who was a summer-only Archives student assistant, returned to classes last week. Britain and Jimmy graduated last spring, and this fall, Jimmy is starting his second year of courses at OSU’s School of Dentistry. Meanwhile, Britain is beginning her first year of coursework at Kent State University’s College of Podiatric Medicine. Thanks and good luck to all three!

So let’s get to the photos!

Without the name, would Buckeyes be so nutty about OSU?

September 27, 2013 / drobik.5@osu.edu / Comments Off on Without the name, would Buckeyes be so nutty about OSU? 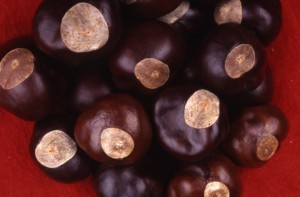 Why is our University mascot a poisonous nut? It starts with the nickname for Ohioans in general, obviously:

In the late 1700s, the first court in the then-Northwest Territory was opened near Marietta by Colonel Ebenezer Sproat. A tall man, usually dressed in military uniform and carrying a sword, he apparently impressed the local Native Americans so much that they started calling him “Hetuch,” which translates to “eye of the buck” or “Big Buckeye.” Buckeyes were also associated with Ohio since the first migration to the state, since the trees’ soft wood made it easier for early pioneers to clear land for farming, and fashion such items as bowls and walking sticks.

When William Henry Harrison, a former U.S. Senator of Ohio, was running for President, his campaign featured walking sticks and other carved pieces made of Buckeye wood. Even before the campaign, some members of Congress apparently referred to him as a “Buckeye” as a sign of affection. 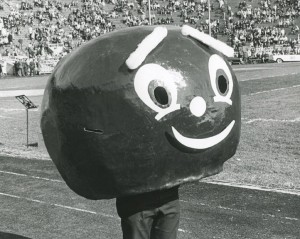 By 1930, there was debate over whether the “Buckeye” should be the University mascot. That year, members of the Student Senate debated over the choice: Edwin Schoenleb of Marysville, stated, “the name ‘Buckeye’ does not indicate aggressiveness.” Alternative choices included sheep, goats, lions, tigers and bears. Ultimately, however Senate members decided on the poisonous nut; it is distinctive, they argued.

In 1950 famous cartoonist and alumnus Milt Caniff drew several designs to be used by the Department of Athletics for logos and uniform details featuring buckeyes and buckeye leaves. Ohio State finally got an actual “Buckeye” mascot when Ray Bourhis and Sally Lanyon created the now-ubiquitous Brutus Buckeye, who made his first appearance at a football game on October 30, 1965.