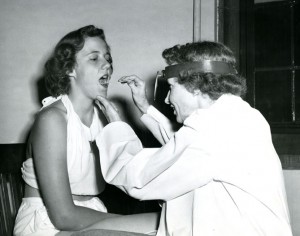 A student being examined in the student health clinic, 1948

Nowadays, OSU students hoping to avoid catching colds might check out the web site for the Centers for Disease Control for advice. Back in the early 20th century, before the Internet, they went instead to the Student Health Service to pick up a handy Form 453, called “To Avoid Colds,” which was part of the health service’s personal hygiene series.

Some of advice is still recommended today, such as: drink plenty of fluids, get fresh air, dress according to the weather, and avoid stress and anxiety. There were some strategies, however, that were just kind of odd:

·         “Don’t wear too heavy clothing indoors. Wearing sweaters indoors is one of the most common causes of ‘colds’ among students.”

·         Be regular in your habits; eat slowly; masticate thoroughly; avoid an excess of protein diet.

·         See that you bathe judiciously; follow the directions given in the Chart on Bathing. (Unfortunately, the Archives does not have a copy of that likely helpful pamphlet.)

·         “Practically every cold is preceded by constipated bowels or torpid liver.”

Those torpid livers, they are never up to any good.

In any case, as was mentioned, the list of advice on avoiding colds was just part of a series of health tips issued by the Student Health Service, which began in the Department of Physical Education during the 1912-13 academic year. Headed by Dr. H. Shindle Wingert, the service grew rapidly in popularity from its first year when 851 visits were recorded; by 1920, roughly 10,000 students a year were visiting the service, which had been made a separate stand-alone unit in 1915.

As it grew over the years, it changed locations: Hayes Hall, Baker Hall and the first Ohio Union (now Hale Hall) were some of its homes. In November 1969, the Wilce Student Health Center opened. It was named after Dr. John W. Wilce, who had been director of the Student Health Service for 24 years, head football coach for 16 years, and a member of the faculty for 45 years.

For some modern medical advice, see the CDC’s webpage:  http://www.cdc.gov/flu/about/season/flu-season-2013-2014.htm

Now in a new home, Cartoon Library owes much to Milton Caniff