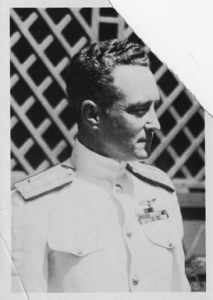 The Byrd Polar and Climate Research Center is the Ohio State University’s oldest research institution. Founded in 1960 as the Institute of Polar Studies, the Center was renamed in 1987 in honor of one of the greatest Polar explorers of the twentieth century.[2] Admiral Richard E. Byrd was a man of many feats. An adventurous sort, Byrd was one of the few contenders vying for the status as the first man to fly over the North Pole. Admiral Byrd claims to have flown over the North Pole in May of 1926 in his plane Josephine Ford along with his copilot Floyd Bennett.[3] The claim has been controversial almost from the moment Byrd announced the achievement, but became especially contentious after Byrd’s death in 1957.  Undisputed however, are Byrd’s numerous contributions to Antarctic exploration. Byrd led no less than five expeditions to Antarctica. His many “firsts” and accomplishments include: established “Little America, “the base of operations during his first expedition from 1928-1930 that would live on in subsequent expeditions, was the first to fly over the South Pole in 1928, sent the first radio broadcasts from Antarctica to the American mainland in 1934,  and would be nicknamed the “Mayor of Antarctica”.[4]

Carrying on Admiral Byrd’s legacy of Polar study and exploration, the Byrd Center’s mission is “to conduct multi-disciplinary research, offer enhanced educational opportunities, and provide outreach activities with the goal of promoting understanding of the ever-evolving Earth System.”[5] Scientists at the Byrd Polar and Climate Research Center have traveled the entire globe researching the Earth’s climate. They study current and past environmental patterns from not just the Poles, but also glaciers in the tropics and other important ecological resources. 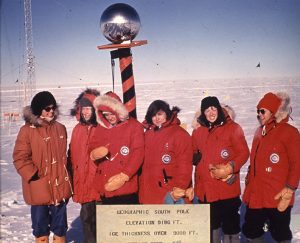 Dr. Lois Jones and her team stand before the marker
denoting the South Pole.

The Byrd Center’s Archival Program was officially established in 1990.  The cornerstone of the program is the Papers of Admiral Richard E. Byrd, acquired by the University in the mid-1980s.  Today, the Polar Archives houses much more than just the papers of Admiral Byrd. The achievements of many great polar explorers are remembered in the Archives, including collections for Dr. Frederick Cook, Sir George Hubert Wilkins, and even Dr. Lois M. Jones, the leader of the first all-female expedition to Antarctica! The Archives contains memorabilia, items from expeditions, papers, and many other artifacts from polar explorers and their adventures. All of these items are available to the public upon request; the job of any archives is to both preserve and make available primary sources from the past.

For more information on the Byrd Polar and Climate Research Center or the BPCRC Archival Program, please check out their respective websites! The Archival Program has some materials online and also is open to the public. The Byrd Center itself frequently gives tours of its facilities and strives to conduct public outreach.