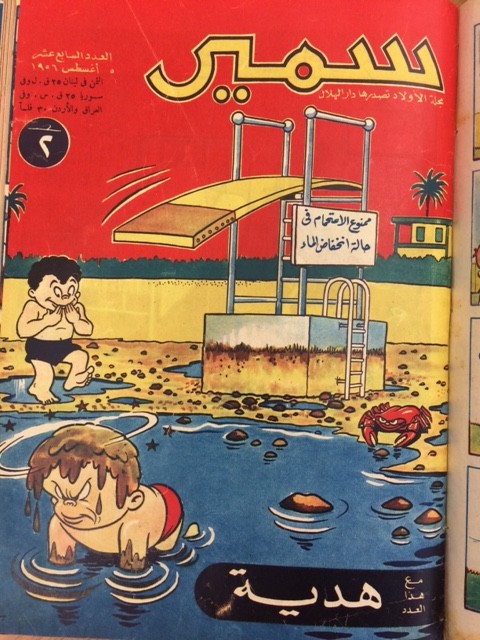 The comics weekly Samir was founded in 1956, four years after the 1952 Revolution, when Jamal Abd al-Nasser and the Free Officers overthrew the British-backed Egyptian monarchy. Published by the government-owned Dar al-Hilal, it would become the most popular comics magazine in the Arab world in the 1950s and 1960s.

The 1956-7 issues in the collection showcase the magazine’s mission of educating Egypt’s young citizens in a nationalist mold in the early years of the Egyptian republic. Some of the recurring strips feature characters created from local contexts, such as Basil, a young adventurer who battles networks of smugglers to protect Egypt’s borders, or Samira, a girl who often demonstrates the smarts and strength of female characters.  Some strips draw on internationally known characters such as Mickey Mouse and Alice and Wonderland. In other strips, the pairing of the two iconic figures Juha and Samba reveal how racialized colonial stereotypes reappeared and were re-adapted in Egyptian and Arab contexts. 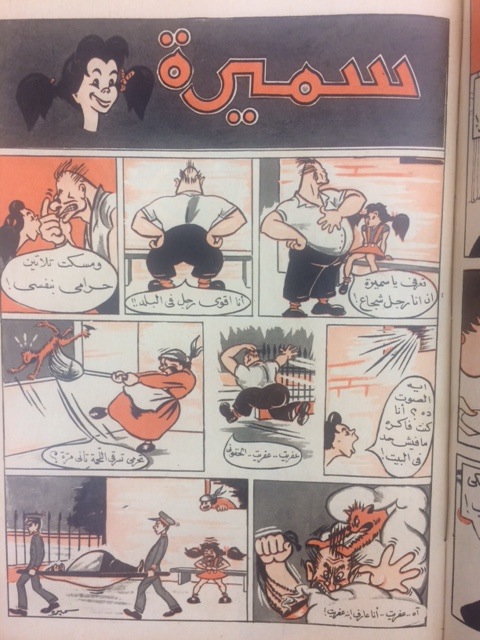 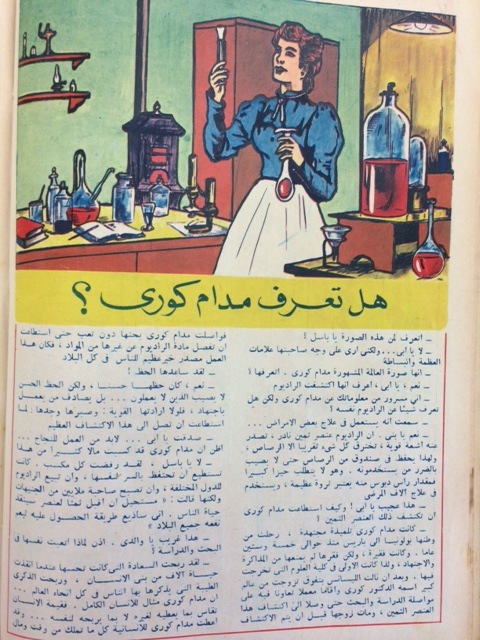 Do you know Madame Curie? 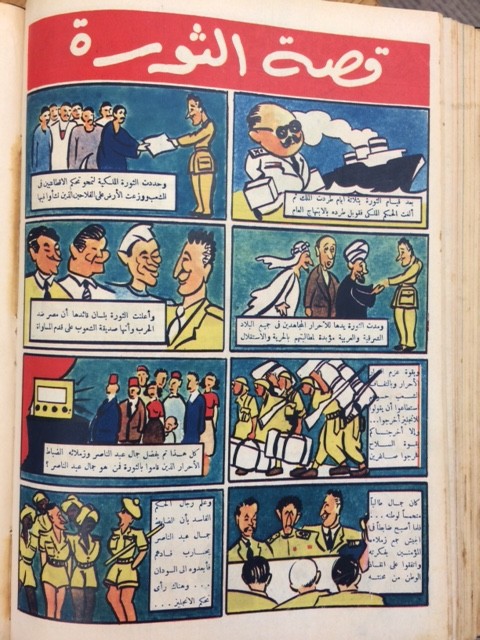 The Story of the Revolution

In later issues, Samir would take a more critical turn. Artists such as renowned Egyptian political cartoonist Ahmed Hijazy, who joined the magazine in 1965, played a role in reshaping the direction of the magazine in the 1960s and 1970s. Hijazi’s popular strips chronicling Samir’s adventures with the comical Tanabila trio would satirize Egyptian politics and Egypt’s class culture. Some of these later issues can be accessed at other libraries: http://osu.worldcat.org/oclc/11352739

Billy Ireland holds one of Ahmed Hijazi’s original drawings in its collection: 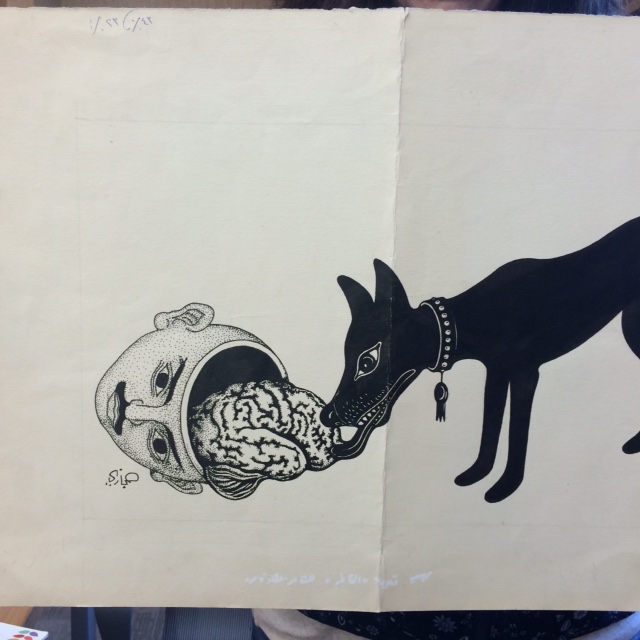 Dunia Al-Ahdath (The World of Youth) is considered the first Lebanese comics magazine. It was founded in 1954 by the poet, teacher, and children’s book author Loreen Rihany. Loreen and her husband (owner of Rihany press, which printed the magazine) were active in many organizations that promoted Lebanese cultural institutions.  Arab comics scholar Henry Matthews has suggested that the magazine’s was closely modeled on the earliest Arabic children’s comics from the 1940s and 50s. The form and content of the early issues bear a close resemblance to the Egyptian magazine Sindibad (Matthews 5). 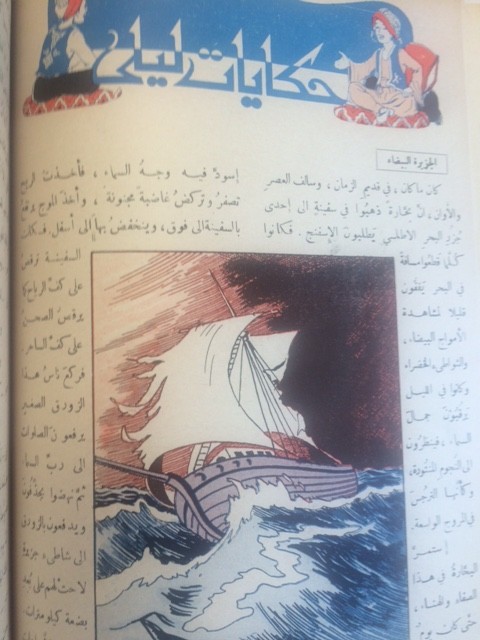 The Story of Layla

Like Samir, Dunia al-Ahdath featured both local stories and heroes, such as Hikayat Layla (The Story of Layla) and the adventures of Zarzour and Farfour as well as Lebanese re-interpretations of characters such as Tarzan and Flash Gordon. 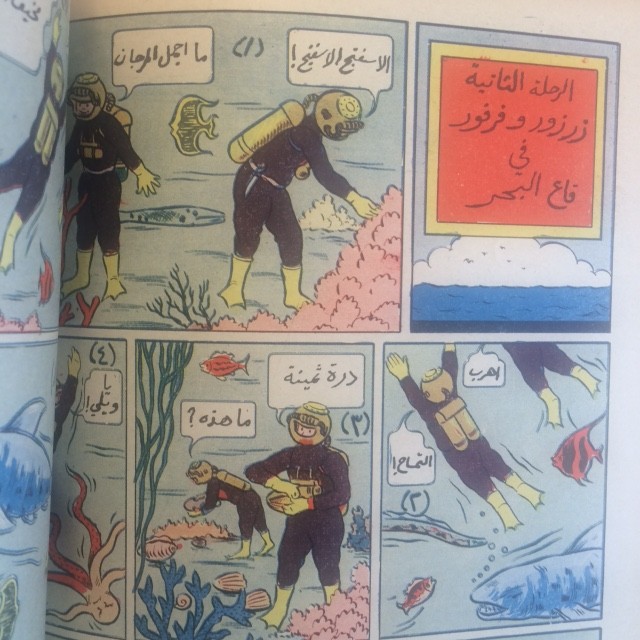 In 1964 Dunia al-Ahdath changed its format and became al-Foursan (The Knights). It ceased publication in the early 1970s.

These collections of Samir and Dunia al-Ahdath issues show the beginnings of two magazines that would play central roles in the history of modern Arab comics. Come and take a look!