Frank Santoro is a cartoonist from Pittsburgh, Pennsylvania where he lives and works, and was the recipient of the 2018 Lucy Shelton Caswell Research Award. He is the author of Storeyville, Pompei and most recently Pittsburgh from New York Review Comics. His work has been exhibited at The American Academy of Arts and Letters in New York and at the National Archaeological Museum of Napoli in Italy.

Below, Santoro reflects on his time spent researching at the Billy Ireland Cartoon Library & Museum for his recently debuted project, CANIFFER. 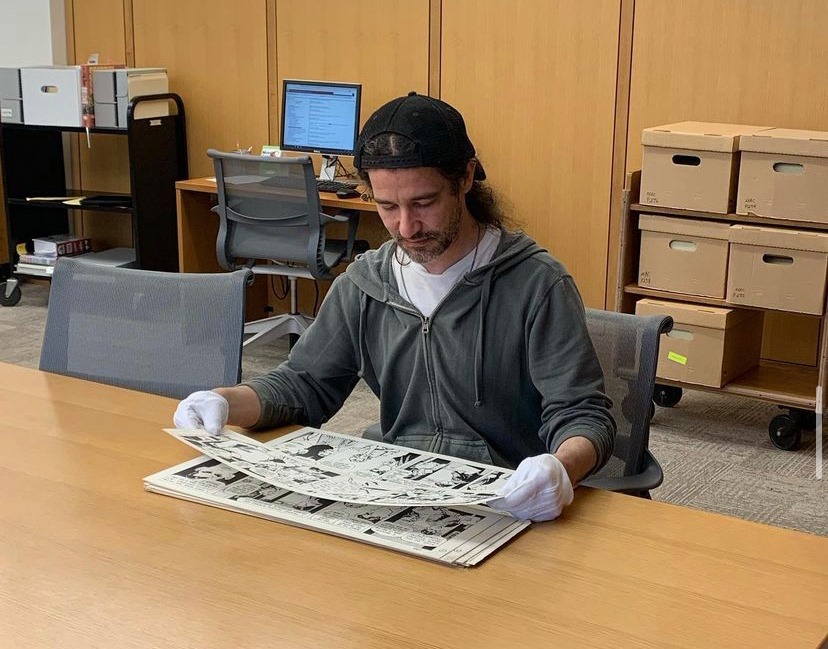 Hi my name is Frank Santoro and I am studying the foundational collections of the Billy Ireland Cartoon Library & Museum (BICLM) at The Ohio State University. I am an author, a cartoonist, and a painter. I had the honor of receiving a research grant to study at the BICLM, and I’d like to write a little about my experience.

I also teach the discipline of making comics and have set up my own correspondence course for cartooning. I modeled my school on the Landon School of Cartooning which originated in Cleveland, Ohio. I am from Pittsburgh Pennsylvania, and I have always been fascinated by regionalist art in America from the last 150 years or so. I think there is a strong regionalist voice in the Ohio Valley and I set out to map that lineage through my research at the BICLM. I am attempting to pass on the traditions laid down by the likes of Billy Ireland, Edwina Dumm, Charles Burchfield, Milton Caniff, Noel Sickles, and many other artists who are from Ohio and the tri-state area.

I’d like to speak for the authors, the cartoonists, painters and poets who participate in the oral history of art but who may not publish papers or even have a blog. We love to study, to do research, to compare notes. Most cartoonists aren’t scholars until our obsessive research turns us into an expert or a scholar, or someone calls us one. I was doing research for my fanzine ComicsComics and also for The Comics Journal when I heard about the Lucy Shelton Caswell Research Award. I mean, I was in the BICLM already pulling boxes out of the Milton Caniff collection when I read the announcement. I thought “why not” and applied. I want to continue to study what I call the Ohio Naturalist School. And here I am. I was shocked to receive the award. Very humbled. Like I say, I’m not an academic. No degrees. Art school dropout. However, I’m a cartoonist and I like participating in the oral history of my chosen field. And I think I have a lot to share. Connections between things not often discussed in cartooning. Like music. Did you know that a copy of the sheet music to W.C. Handy ‘s St. Louis Blues is in the Caniff archive with a dedication from the maestro to the maestro? If that ain’t American History, I dunno what is.

My experience as a Lucy Shelton Caswell Research Award winner could not have been better. I went in the summer when the students were not really around. It was hot. But cool and oasis-like in the BICLM. I had such a routine down, day after day, week after week, that I began to feel like a student. It was easy to sink into the Milton Caniff collection and feel his presence on 16th and High, at the intersection where he spent much time as an OSU student. I took a drive down to Chillicothe, Ohio to see where Billy Ireland and Noel Sickles were from. I listened to Edwina Dumm and Lucy Caswell talk about Billy Ireland on an old audiotape recording. I read old comic strips. Slowly. Letters back and forth between Billy Ireland and Noel Sickles. Did you know they wrote to each other pretending that they were soldiers in the American Civil War? I pieced their lives back together from the fragments they left. And what fragments! How lucky we are to have this public institution which exists in order to let anyone participate in this History.It really is hard to grasp how vast the holdings are until you spend time there. And how different it is to participate in Art History in real time. Winsor McCay next to Rory Hayes in the backroom hanging out. Like students in one big school.

CANIFFER is my working manuscript for my research about what I call the Ohio Naturalist School. An unadorned love letter to Milton Caniff, Noel Sickles, Billy Ireland, Edwina Dumm, and C.N. Landon amongst others. I just want to use analog serial means to make inroads towards a big picture study on these great artists. I feel most comfortable using the photocopied fanzine as a platform above all else. Eventually, it’ll be digitized but until then it is a typewriter and a photocopy machine. It’s eccentric but using analog means also lets me feel closer to the time period I am studying.

Thank you to Jenny Robb and Caitlin McGurk. And special thanks to Susan Liberator. And the staff at the front desk of the BICLM. (And thank you to Lucy Caswell and Tom Spurgeon RIP) 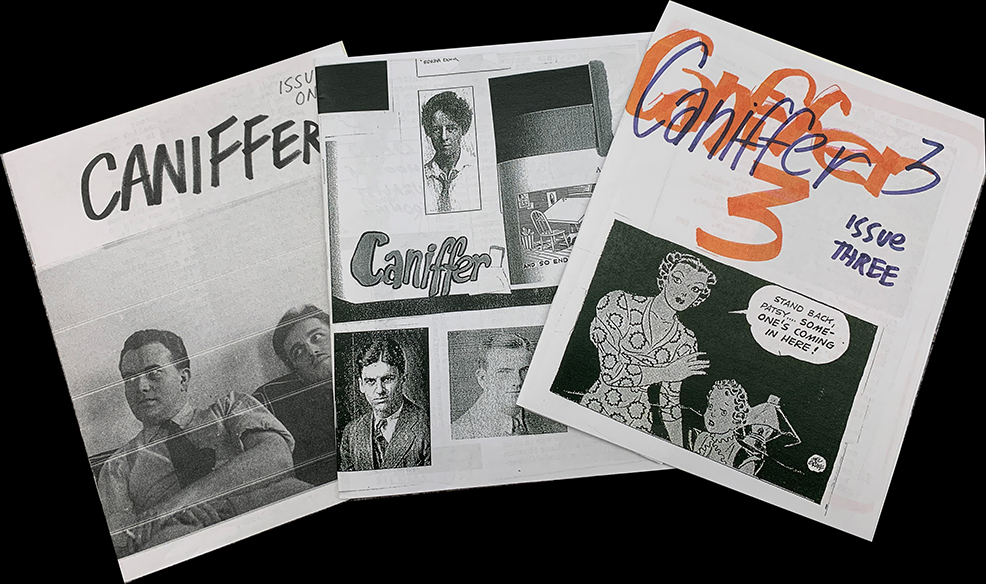 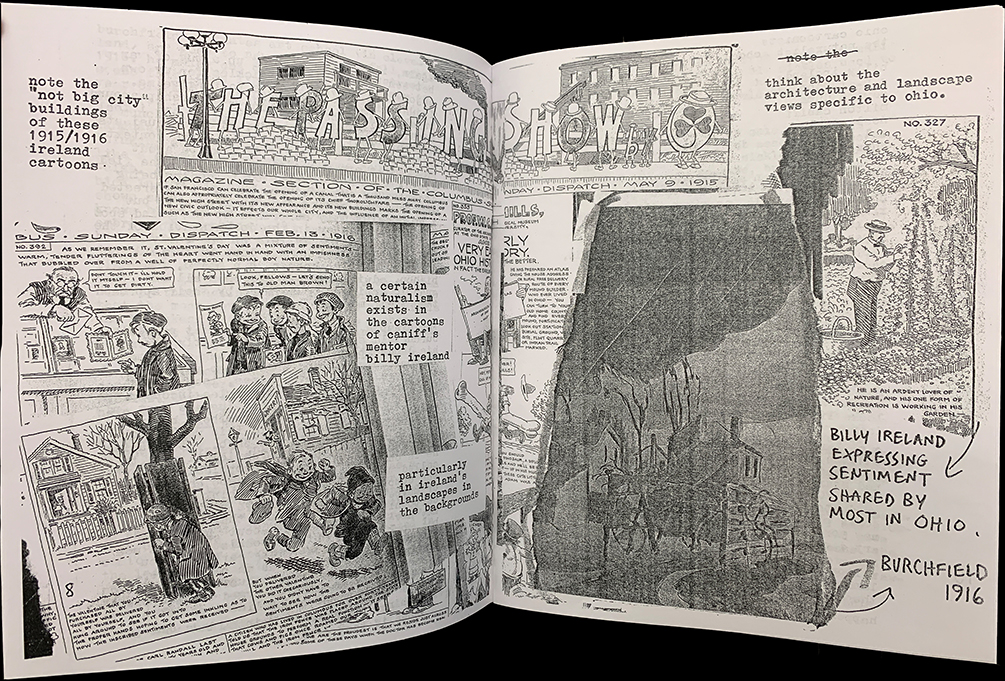 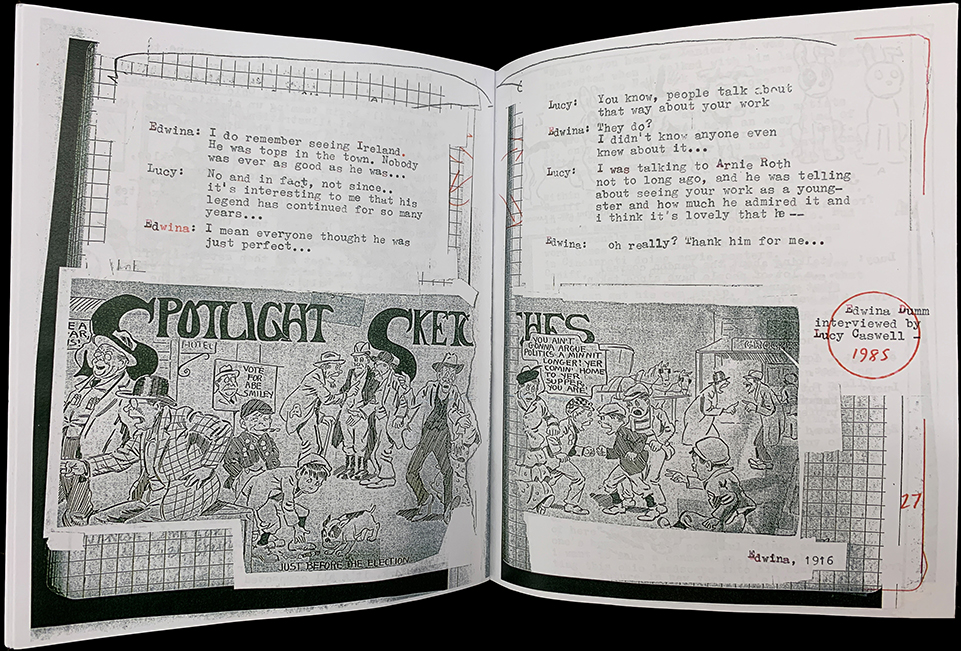 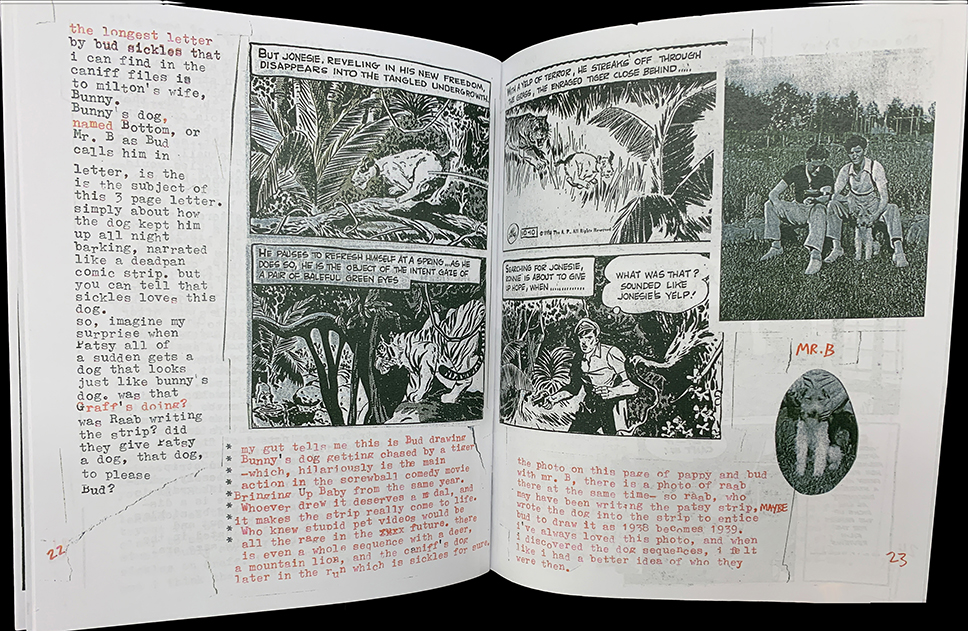 April 30, 2020 / Caitlin McGurk / Comments Off on Student post: Morrie Brickman and Me

Morrie Brickman and Me
by Michael Patton

Bio: Michael Patton is an Actuarial Science major graduating this year. He’s been formally working at the Billy Ireland Cartoon Library & Museum throughout his four years at Ohio State, working in the reading room and in the stacks. He also did some volunteer work in high school during his summers.

Comics aficionados would most likely know Morrie Brickman from his work on the small society, the witty editorial cartoon he wrote from 1966 to 1984. I, on the other hand, had an unorthodox first introduction to his work in the stacks of the Billy Ireland Cartoon Library & Museum: When sorting through materials, I found a screenplay draft for a stage play called Coming of Age written by a Morrie Brickman. Intrigued, I looked up the author and his work. As I discovered, after he finished his cartooning career, he wrote the play I’d found. Much like small society, it was based on his own life, except that it focused on his experiences in retirement. His play would ultimately not be produced, and he died in 1994. It was a sad story until I found an article from OSU’s student newspaper The Lantern published in 2003 titled “Artist, Playwright Exhibited” that described OSU’s Cartoon Research Library (known today as the Billy Ireland) exhibiting Brickman’s work on the small society that Saturday, October 25. But more importantly, at 2 p.m, they were to perform a live reading of Coming of Age—the first time it would be experienced publicly. 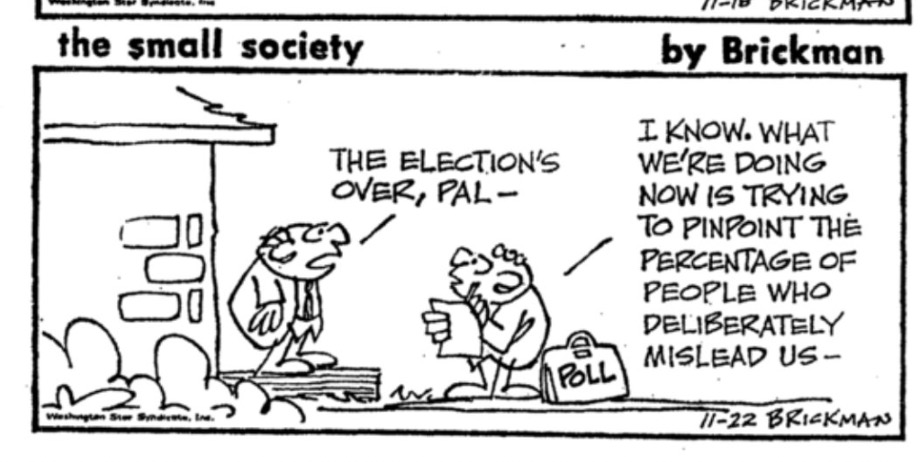 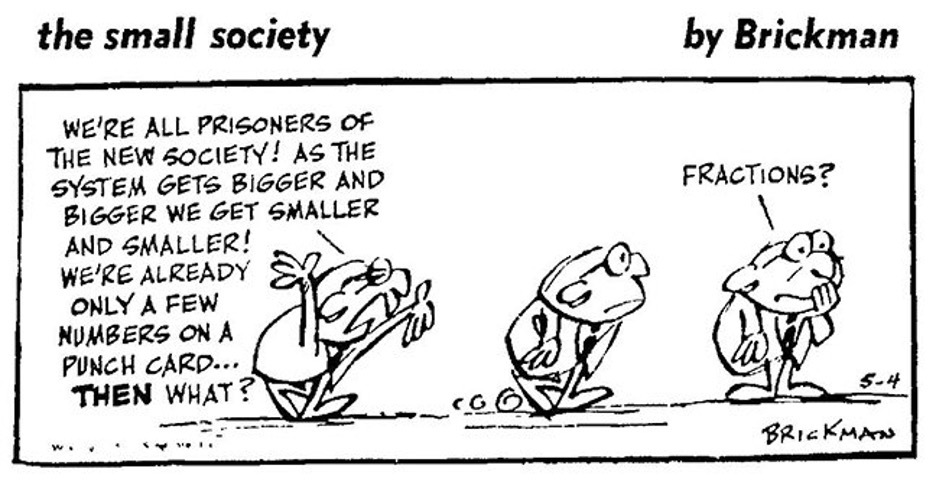 Apart from warming my heart and instilling in me a sense of pride in my place of work, this 2003 event that happened when I would have been six years old has prompted me to think about how important it is to “be a friend” to creatives and to support the work they put a part of themselves into when it might otherwise remain unshared. As someone with friends who love to draw and write about fun characters and stories (and someone who does that myself), I feel it is my duty to encourage them to continue creating and iterating on their ideas. I think most everyone who gets into cartooning will do it for themselves because it is something they love, but they’re most rewarded when their work puts a smile on someone else’s face. While Brickman was unfortunately no longer with us for the reading of his play, I have no doubt that Coming of Age was a pleasant experience for those present, and that if he were there, he would have been elated.

Inspired by the library’s support of Brickman, I recently decided to do something similar with my friends, organizing a club where we write short pieces, share them, and read them out loud together over a group voice call. This way, even if they never get to share their pieces with a wide audience of readers or viewers or moviegoers or what have you, they at least have a group of people that they know will read it and enjoy it. If there are any writers out there reading this post, I encourage you to share your work with those close to you. This reading of Brickman’s unperformed play has also reminded me quite a bit of an experience of my own with a creative’s vision left unfulfilled: In 2005, my mom’s mother passed away when I was only seven years old. I wasn’t fully aware of this at the time, but my grandma loved to write. From my first semester at OSU, I’ve been reigniting my own creative side in cartooning and prose writing, as well as learning the language of film and comics. As I’ve done this, my mom has given me my grandma’s writing books such as Oakley Hall’s The Art and Craft of Novel Writing among others. Many of these books have her yellow highlighter marks and margin notes, and it’s as if, through them, grandma is speaking to me, a fellow aspiring author. While on a walk with my mom recently, I learned that grandma’s dying wish to her was to publish her manuscript—a historical fiction novel called Philippa’s Gold that was set in San Francisco during the gold rush period. Unfortunately, publishers passed on the novel because grandma would have been a first-time author who couldn’t publish any further work. Mom instead chose to self-publish Philippa’s Gold and distribute it at grandma’s funeral. After learning of this, I realized that Brickman’s previously unperformed play became more personal to me. I recall looking through it and seeing very charming handwritten notes in the over-100-page screenplay. In my brief time with it, I could easily feel the passion he had for his play, and in hindsight it reminded me of grandma. 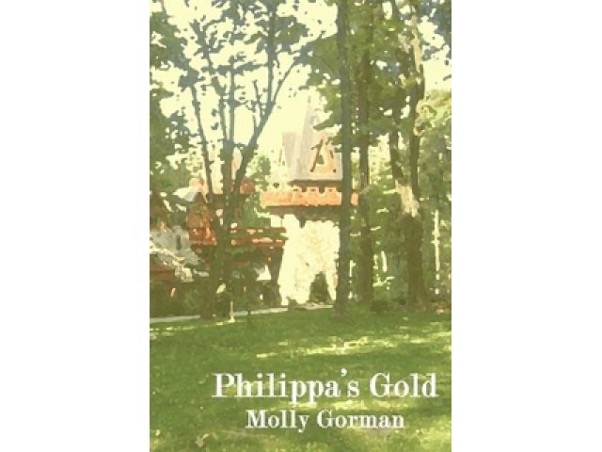 The unfortunate reality of doing creative work is that passion alone isn’t always enough to ensure a vision reaches the rest of the world, as with Coming of Age and Philippa’s Gold. But while that would be nice, I don’t know if either Brickman or my grandmother needed the world to see their art. I can’t ask either of them personally, but I know that my goal as a writer and artist isn’t necessarily to reach the world, and I’m happy enough to share my work with my friends and family. The lesson I’ve taken away from this is that if I expect to share my work, I should be not just willing, but happy to read what friends or even strangers present to me. And more importantly than read it, I want to tell them what I think and let them know that the piece they’ve poured their heart into is valid. Because for creators who can’t share their work with the world, you who engage with it have effectively become their world. I would like to believe that Morrie Brickman’s friends and family let him know how they felt about his play before he passed and am happy to see that the Cartoon Library was able to give it some posthumous validation.

Coming of Age, Morrie Brickman’s play, can be read in the Billy Ireland Cartoon Library and Museum reading room. If you’d like to request this play, check out our handy Materials Request Form Guide and send us an email at cartoons@osu.edu.