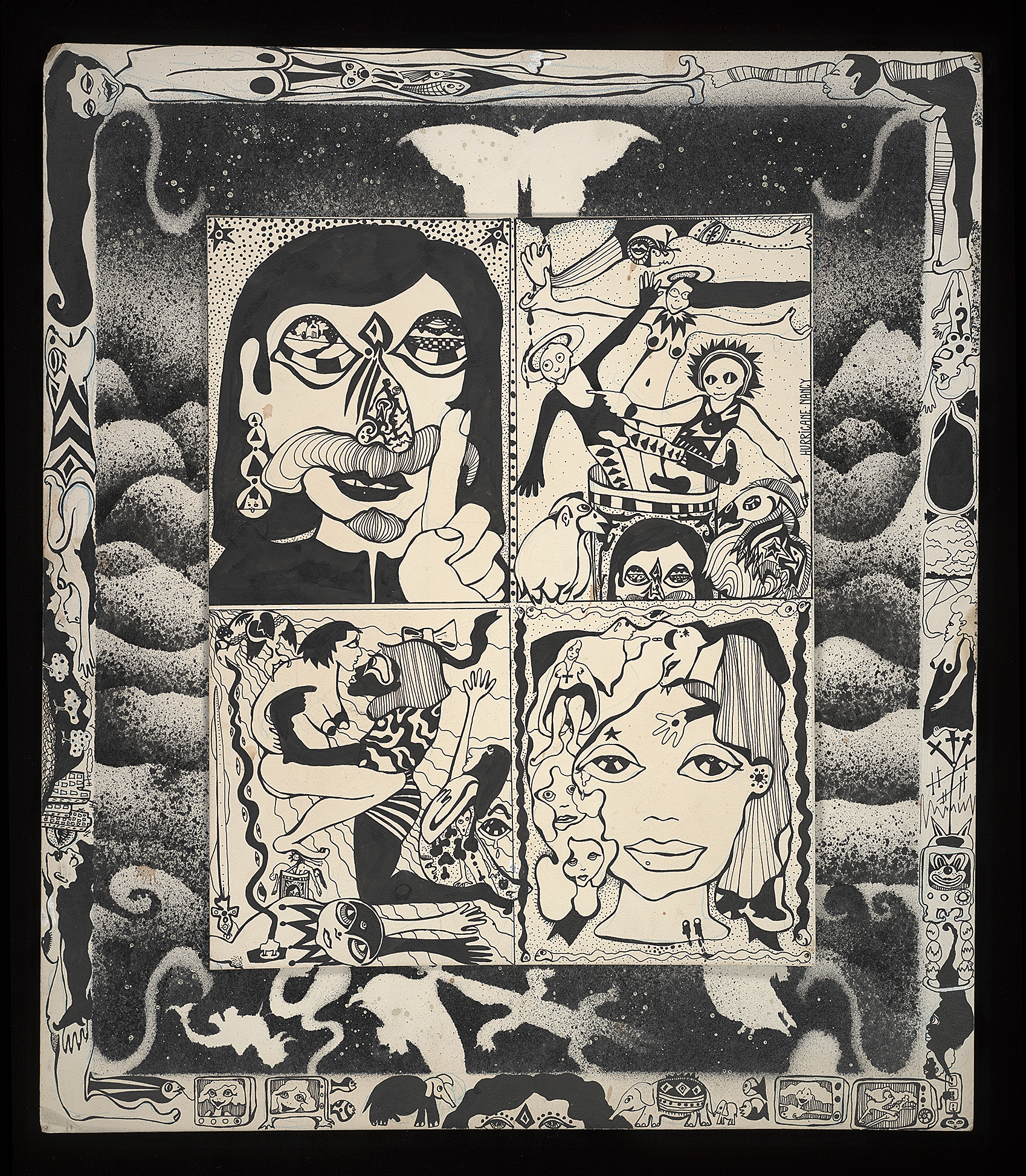 Known by her pennames Hurricane Nancy, Nancy Kalish and Panzika, Nancy Burton is considered one of the first published women cartoonists of the underground comix era. Her donation includes the original art from Gentle’s Tripout, published in the East Village Other beginning in 1966, as well as Busy Boxes, which was published in Gothic Blimpworks (1969), and other unpublished early work. In 1970, Burton’s work was included in the seminal women’s liberation underground comic, It Ain’t Me Babe, edited by Trina Robbins. By 1971, Burton stopped creating comics but later picked the practice back up in 2009. The collection also reflects her more recent works.

Originally from the Far Rockaway neighborhood of Queens, New York, Burton grew up in a liberal, activist family, marching with her father on union picket lines, and later on Washington in protest of the Vietnam War. She spent time traveling across Europe in the early 1960s, where she encountered the work of Dutch painter Hieronymus Bosch, and then while living in New York, she found inspiration in the abstract art of Clifford Still as well as the art nouveau movement. A formative visit to San Francisco for the 1967 Monterey Pop Festival led to her living in California through the Summer of Love. On the West Coast, Burton’s work became more primitive and psychedelic, influenced by the iconic concert posters of the era and Native American art.

About her decision to donate her collection to the Billy Ireland Cartoon Library & Museum, Burton said, “It was clear from the outset we are a perfect match. Knowing that serious students, and some just for fun, will have access to my work is satisfying to say the least. I made the decision immediately to donate the work and am honored to do so.”

Writer Alex Dueben is editing a monograph about Burton set to be published by Fantagraphics, which collects work from throughout her career and includes an expansive interview detailing her life and artistic output. Dueben connected Burton and Associate Curator Caitlin McGurk after Burton expressed a desire for the material to be preserved. McGurk says, “I was over the moon to be connected with one of the pioneers of women’s underground comix – it is such an honor to us to be chosen as the home for preserving this important work. Women’s Gender and Sexuality Studies courses as well as anyone interested in exploring the feminist history of comics will find this collection to be a treasure. It is imperative that we continue to document and preserve the history of women working in this and all eras of cartooning, and this collection is an invaluable part of those efforts.” 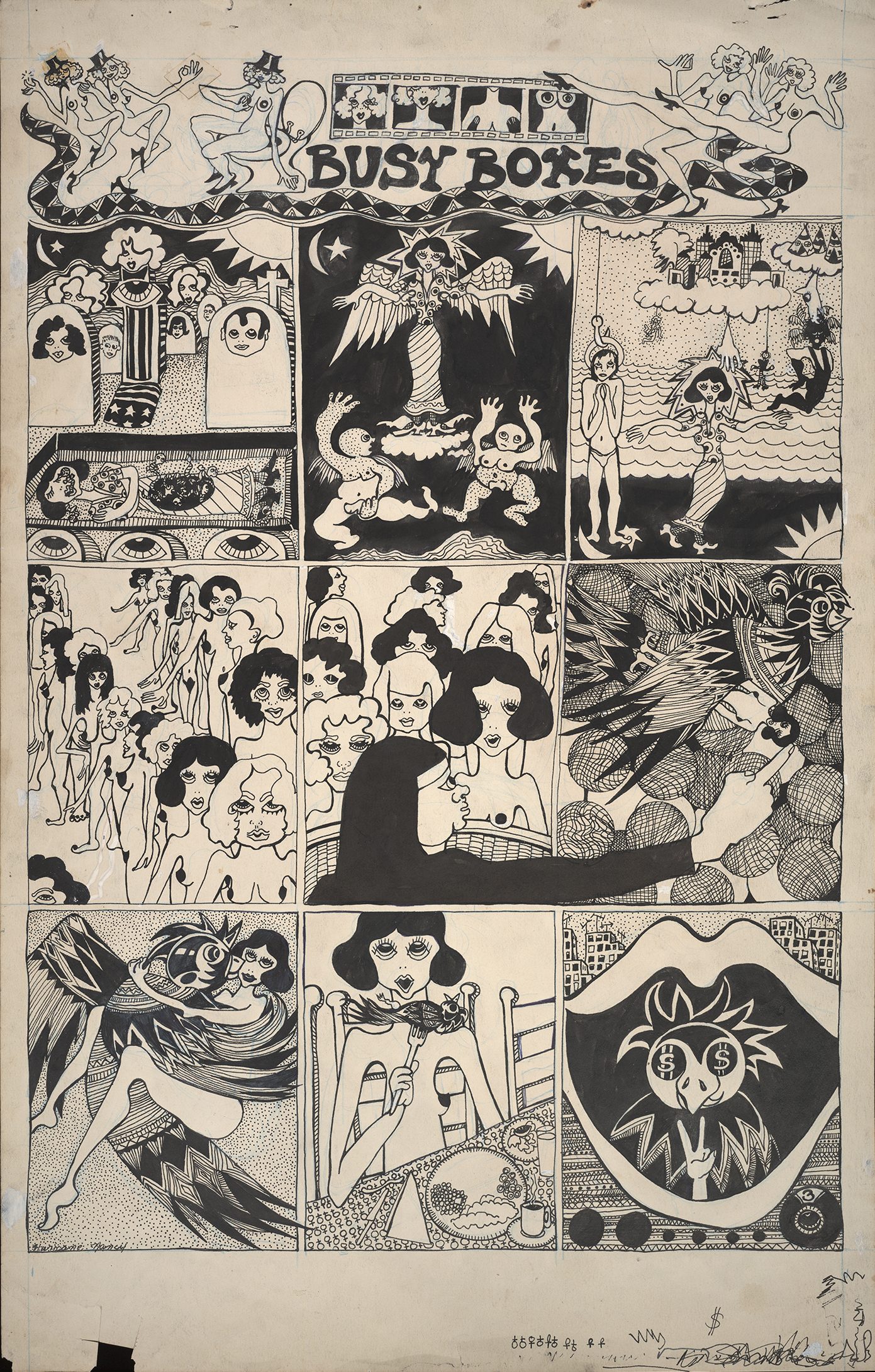 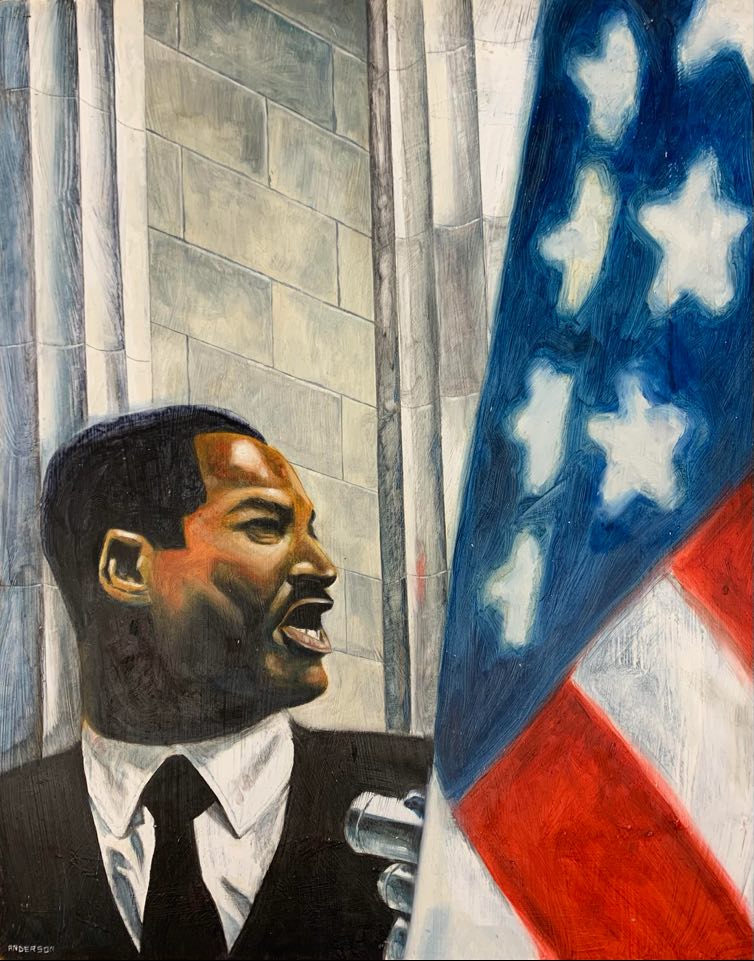 COLUMBUS – Cartoonist Ho Che Anderson has donated all of the original art, paintings and manuscript material from his graphic novel King: A Comics Biography Of Martin Luther King, Jr. to The Billy Ireland Cartoon Library & Museum.

King is a raw, energetic and compelling graphic narrative that chronicles the complex life and tragic death of the celebrated Civil Rights leader and icon. Anderson spent more than 10 years researching and producing King, which was originally published by Fantagraphics in three volumes released in 1993, 2002 and 2003. This donation contains the script drafts, notebooks, preliminary sketches, press clippings and publisher correspondence that culminated in this renowned work.

Anderson was born in London, and resides in Toronto, Canada. About the donation he said, “King being an American story, I liked the idea of donating to an American archive, even though I’m a Canadian. I reached out to Billy Ireland and was relieved when they expressed enthusiasm for taking the collection off my hands. Later, I got the opportunity to visit the museum in person and knew immediately I’d made the right choice.” Anderson was a special guest at the annual Cartoon Crossroads Columbus (CXC) festival in 2019.

Other works by Ho Che Anderson include Godhead, Wise Son and the White Wolf, Scream Queen, I Want to Be Your Dog and Sand and Fury. His publisher at Fantagraphics, Gary Groth, said, “Working with and publishing Ho Che Anderson has been one of the most rewarding associations of my life in comics, personally and professionally. Ho has always tackled his creative work with a ferocious passion and integrity and a restless formal and stylistic experimentation. I reflect with great pride on publishing Ho throughout his career from his earliest work, such as King and Black Dogs through his current project Godhead.”

“Works like King,” Jenny Robb, curator of the Billy Ireland Cartoon Library & Museum said, “give us a fresh and vivid perspective on historic events, bringing them to life in a way that is both powerful and challenging for the reader. Anderson’s work shows how comics could be successfully utilized to present a complex, critical, yet compassionate biography of a major cultural figure. We are so honored to be entrusted with preserving this essential work. The inclusion of Anderson’s manuscript materials is a gift to researchers that will surely be utilized for years to come.”

Anderson added “I’m thrilled by the idea […] that a cartoonist’s work can be preserved until the sun goes supernova and offer the succeeding generations a means of education, inspiration and the thrill of viewing original comic book art.” 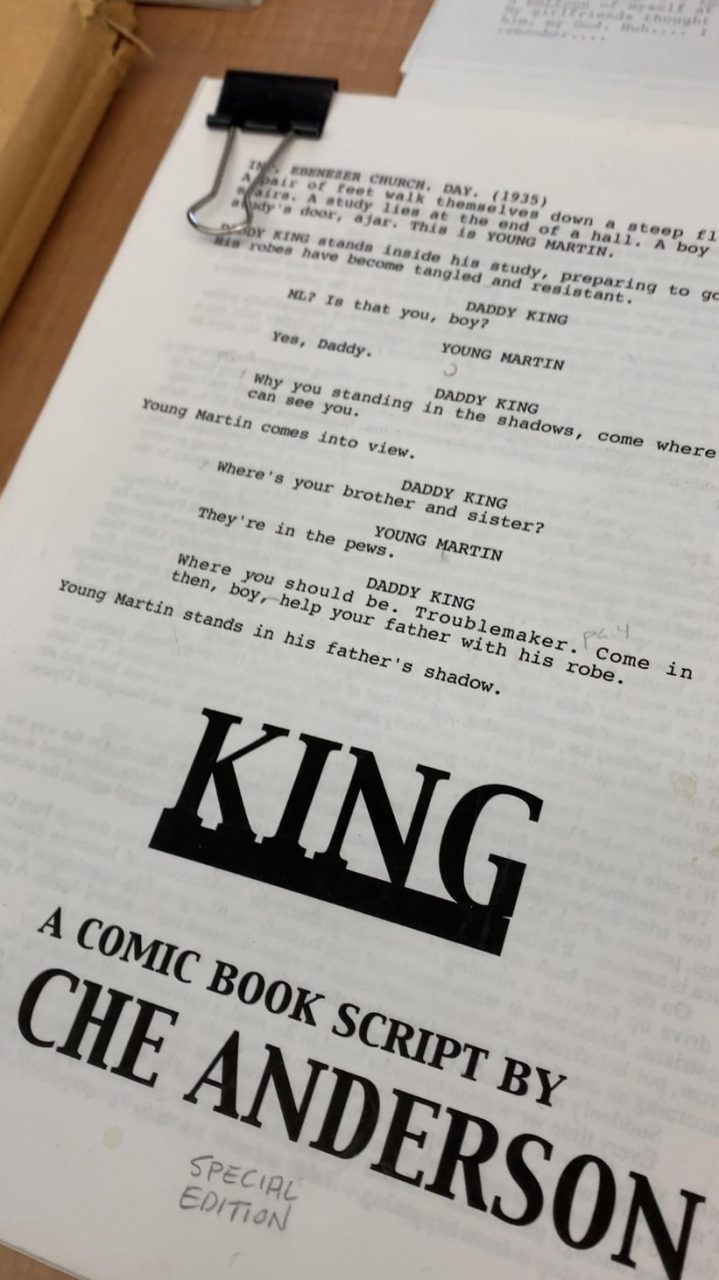 Comic book script from the special edition of “King”