Frozen Fridays: ‘C’ is for Cook! 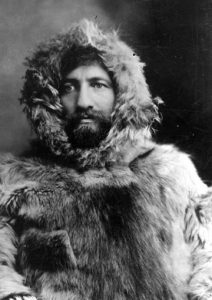 During the Antarctic winter of 1898, Dr. Frederick A. Cook found himself trapped on the ship Belgica in the Antarctic with eighteen other men. The dark and damp conditions drove some men insane and brought each man to a state of depression and irritability. Later, his shipmates would recall Cook as “most popular man on the expedition…Upright, honorable, capable and conscientious in the extreme.”[i] History, however, was much harsher. Frederick Cook is typically remembered as the con man that tricked the world into believing that he had scaled Mount McKinley in 1906, and reached the North Pole in 1909.  Both claims would be contested.  As the Reader’s Digest explains, “the enigmatic Dr. Frederick Cook is either one of the greatest explorers of all time or a confidence man of exceptional talent.”[ii]

As a young man, Cook was a doctor with a small medical practice. Business was slow for the new doctor, and in his spare time, Cook began studying the Arctic. This interest led Cook to join Robert Peary’s 1891 expedition to Greenland. With the stated goal of defining the northern limit of Greenland, the expedition, with Cook as a star member, was a resounding success. It was on this trip that Cook demonstrated the resourcefulness and the adaptability that would prove his worth. Besides dealing with general medical problems. Cook set about studying everything he could about the Arctic including how to ski, speak the native language, and finding a solution to scurvy. 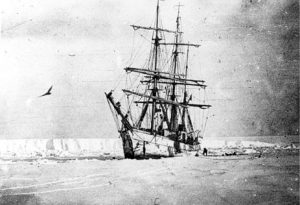 The Belgica on its 1897 expedition to Antarctica.

Like many polar explorers, though, one adventure was not enough. In 1897, Cook joined the crew of the Belgica at the request of Commander de Gerlache. Due to travel delays, the Belgica did not reach Antarctica until January—very late in the exploring season. At the end of February, the ship entered the pack ice and was trapped. The crew found themselves stranded on an unprepared and under-equipped ship for the entirety of an Antarctic winter. Cook kept the crew healthy and in positive spirits, earning their praise. Based on his experience in the Arctic, Cook convinced his companions to eat fresh meat, warding off a plague of debilitating scurvy. Cook also found a solution for the “form of anemia peculiar to the polar regions,”[iii] which could cause insomnia, digestive concerns, and an erratic pulse that attacked the crew as the months without sight of the sun progressed. Deciding that this was due to lack of sunlight, Cook proscribed a “baking treatment”[iv] where the afflicted would lay nude in front of an open fire for several hours. This treatment raised spirits, cured symptoms. and gave the men more energy.

Cook also gave full expression to his improvising talents. He designed and built a light polar sled and a tent which one men could set up in five minutes. Cook’s ingenuity also freed the Belgica from its icy prison. As the polar summer approached, and the ice began to think about thawing, Cook proposed cutting two trenches stretching from the ship to the water. After several fits and starts, the plan worked and the Belgica broke free, making the crew the first to successfully winter in Antarctica. 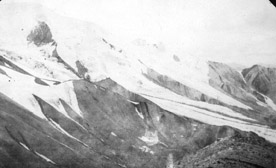 Denali (then Mount McKinley) as
photographed by Dr. Cook on one
of his expeditions to the mountain.

In 1903, Cook set out to scale North America’s highest mountain—Mount McKinley (now known as Denali and will be featured in our next post). Along with several others, Cook became the first to circumnavigate the mountain, but failed to reach the peak. Cook tried again in 1906 when he was initially thwarted by the weather and mislaid plans. After his original plans fell through, Cook and his companion Edward Barrill lingered on the mountain, looking for another route. Then, according to Cook, the weather changed and he and Barrill found a line of paths right up to the summit. They then, in only four days, descended from the mountain. When Cook returned from Alaska he received multiple awards and an overflow of praise for this accomplishment. 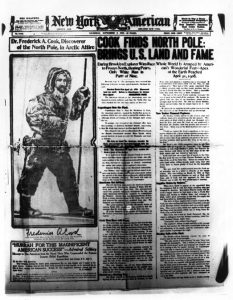 Cook’s claim to have reached the summit was questioned almost immediately.  But Cook was off again on another adventure.  In 1907, he set off with sleds and dog harnesses of his own design, to reach the North Pole, something his old friend Peary had been trying and failing to do for years. Cook reached the Pole in late April with two Eskimos, but it took him over a year to return to his base camp and journey home.  In September of 1909, when Cook finally returned, he announced his success to the world. Several days later, Peary contested Cook with his own claim of success. Both men traveled to the pole with only a few companions, none of whom could take the necessary navigational readings to back up either Cook or Peary. Ultimately, neither could provide the necessary positive proof of their achievement. Nevertheless, Peary set out to thoroughly discredit Cook. Cook’s reputation never recovered. 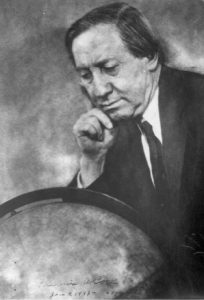 Dr. Cook in his later years.

In 1917, Dr. Cook was hired by New York Oil to prospect for oil based on his knowledge of geology.  He would eventually form the Petroleum Producer’s Association, which became one of the largest employers in Fort Worth.   This success was short-lived.  Cook was indicted on mail fraud charges in 1923 in relation to his oil business, and served time in Leavenworth.  Upon his release in 1930, he lived a relatively quiet life, until his death from a cerebral hemorrhage in 1940.  Cook received a death bed pardon from President Franklin D. Roosevelt. Cook’s daughter, Helene Cook Vetter, would go on to start the Frederick A. Cook Society to defend her father’s claimed achievements.

The Polar Archives holds the records of the Frederick A. Cook Society.  To learn more about Dr. Cook’s life and achievements, as well as the controversy surrounding him, visit our virtual exhibit : https://library.osu.edu/projects/frederick-cook/.

Text written by Autumn Snellgrove and edited by John Hooton.

As Woody Hayes would say, fan paid it forward with his love of Buckeyes football