March 7, 2013 / drobik.5@osu.edu / Comments Off on Home a hard place to find for past OSU women undergrads 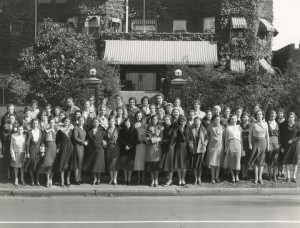 Women undergraduates who attend OSU today should be thankful for the times in which they live. If they had attended the University during its first 50 years, they would have had to work a lot harder to find a place to live here.

Though women attended OSU from the day it opened its doors in 1873, they did not have a dorm until 1908 when Oxley Hall opened. Even then, Oxley Hall housed only 60 women, and there were 600 women enrolled at that time. So until Oxley Hall, women had the options of living at home – if they were from Columbus – or living in area boardinghouses.

Part of the reason for the dearth of campus housing was financial: At the time Ohio State depended much more greatly on state funding, which was miniscule compared to other state universities. For instance, while the University of Michigan received $274,000, and the University of Wisconsin was given $92,736 from their respective state legislatures for the 1881-1882 academic year, Ohio State received $21,950.

It also was not a top priority for OSU’s first leaders; the university’s first president, Edward Orton Sr. never made such a funding request to state lawmakers, for example. (Granted, he had a lot of other things going on, like starting a university from scratch.) 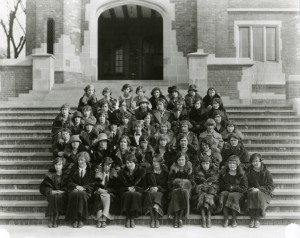 It wasn’t until OSU’s fourth president, James Canfield, that there was a concerted effort to offer campus housing to women, which culminated in the construction of Oxley Hall. Slowly, the campus options increased with the construction of Mack Hall in 1921 and the purchase of Neil Hall in 1925. Women who lived in the dorms were supervised, and did most of the cleaning and other chores in the dorm. They had a curfew and were prohibited from having male visitors except for certain hours on Saturday and family visits on Sunday.

With very limited space at the University, sororities became a very popular choice: Ohio State had 25 sorority houses by 1925. These were considered the next best option for out-of-town students because like the dorms, they were socially acceptable to parents and the University, with each house having a “house mother” and sharing the University standards as to curfew, rules and living conditions. There were also houses supervised by religious entities, such as the Westminster Foundation, which housed a limited number of women students in an off-campus house.

If a student was unable to gain accommodation with family, or in a dorm or sorority, the student still needed a place to stay. Many girls opted to try to work for a family in exchange for room and board. This was not always the best solution; students sometimes would end up exhausted and unable to keep up with schoolwork.

After the appointment of the first Dean of Women in 1912, University staff inspected the rooms that girls rented in private homes to prevent unsafe living conditions. The Office then began keeping a list of boarding houses that could be recommended to students. To be on the list, the home had to pass the University’s inspection, there could be no male boarders in the boarding house and conditions had to be sanitary.

Apparently, some women students lived in conditions so poor that the University left certain campus buildings open, such as the Home Economics Building , so women students could use the bathrooms if their own rooms lacked suitable plumbing. And for all that, women paid as much as $5 a week, while male boarders usually paid $3-4.50 per week.

Much of our information for this blog came from two dissertations on the early history of women at OSU, both of which are available at the Archives: