March 15, 2013 / drobik.5@osu.edu / Comments Off on Bleeds Scarlet and Gray: Registrar as devoted to alma mater as she was to detail 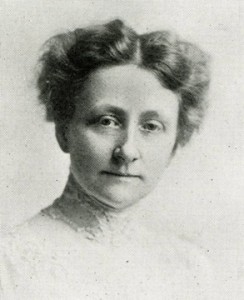 One of our all-favorite people from the University’s past is Edith Daisy Cockins. So upon this anniversary of her death, we thought we should remember her and her commitment to the University.

Edith Cockins first came to Ohio State as a preparatory student in 1888 at the age of fifteen. Two years later, she officially enrolled as a freshman; some of her activities while she was a student included her work on the Lantern and the Makio. She graduated with a bachelor of arts degree in 1894.

She went on to complete a year of graduate work and joined the University staff in 1896 as a record clerk. The following year, she was appointed to the newly created post of University Registrar. She would retire 47 years later, having overseen the records of over 60,000 students. 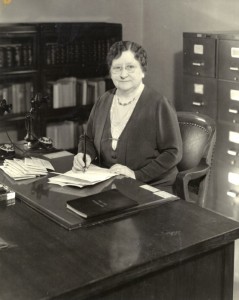 However, in that interval of 47 years, Miss Cockins accomplished quite a lot. As registrar, she was responsible for all student records, and in 1914 she first organized diplomas at Commencement according to a system that allows students to receive their official diploma at the ceremony. It is still in use today, even though roughly 9,000 students attend the Commencement ceremony.

In 1911, she and another loyal alumnus, Ralph D. Mershon, undertook reorganizing the Alumni Association. The next year, she oversaw publication of the University’s “Who’s Who,” a guide to former notable alumni. And in 1929 was named director of the newly created Alumni Records division.

Along the way, she also held the titles of secretary of the faculty and University Editor. Cockins also was involved with several outside organizations, including the American Association of Collegiate Registrars, of which she was elected president in 1938.

Cockins retired from Ohio State in 1944 and was named registrar emeritus. She didn’t stray far from her alma mater, though. She stayed active with the alumni association, and she served as housing chairman for the national organization of Kappa Alpha Theta sorority. She also oversaw the publication in 1959 of a biography on Mershon, for whom the Mershon Center for International Security Studies and Mershon Auditorium are named.

She was awarded an honorary degree, a Doctorate of Administration, for dedicating so many years and expressing such commitment to the University.

Cockins passed away on March 15, 1963 at the age of 89. In 1967 the Pharmacy and Microbiology Building was renamed Cockins Hall to honor her. The Edith D. Cockins Memorial Award was also established to honor the University registrar employee who best demonstrates Cockins’ high standards. 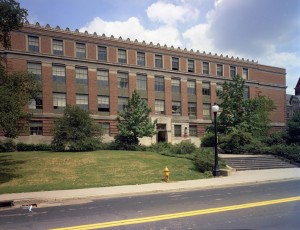 For information on other notable women at OSU, see The Women’s Place’s Encyclopedia of Pathbreaking Women at the Ohio State University at http://www.womensplace.osu.edu/assets/files/womenpathbreakers_Final.pdf