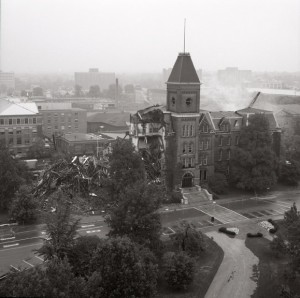 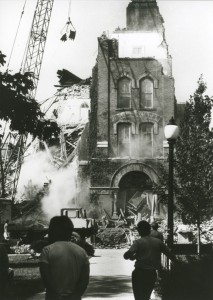 Today marks the demolition of an Ohio State landmark, the (old) University Hall. The building opened in 1873, which was a year later than expected due to problems obtaining and transporting the brick and limestone for construction. However, upon its completion University Hall was essentially the university. It contained student housing (the East wing’s basement–named Purgatory by its residents–and first floor), faculty housing (on the upper floors), a cafeteria (basement), a chapel, classrooms and debating rooms, laboratories, a geologic museum,  library and an armory (the cadets’ rifles were stored in the basement beneath President Edward Orton’s office; the cannon and heavy artilary, however, were kept on the lawn south of the building). The basement in the west wing also held the Mechanical Engineering Department, the reason given being that the building’s stone foundation would prevent the forges from causing fires (and since the place did not burn down we can’t fault their reasoning).  After a dormitory was built and the cafeteria moved, the University Print Shop moved in, printing the first editions of The Lantern. 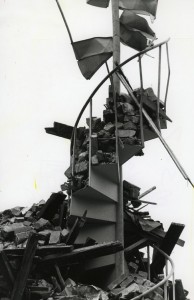 University Hall was more than just living space to many people, as it played host to many University milestones. Numerous Commencement ceremonies were held there, and the Sphinx honor society’s “linking” ceremony and the initiations for the Mortar Board and Chimes societies have been held there for many years. There was also a birth, two marriages, and three funerals held in the old University Hall.

By the 1960s, however, the building had gone way beyond losing its luster. The north wing/chapel floors had begun to sag, and there were serious concerns of fire. It was closed in May 1968. At that point, the university considered demolishing the north wing, which was not original to the structure, and try to renovate the original portion. The university eventually decided, though, that it was best to demolish the whole structure and rebuild a similar structure on the same site. The original building was torn down in 1971, and the new structure was opened in 1976 – almost an exact copy on the outside, but completely modern on the inside. 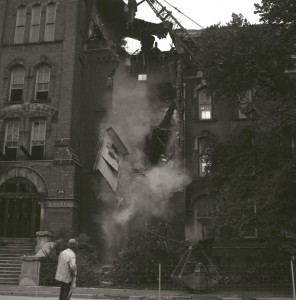 Cramped quarters at the Towers