OSU’s 13 Presidents have lived in only five different residences since the University opened in 1873.

The first University Residence, known as the Rickley House, had a total of 18 rooms (five bedrooms) and was nearly 7,200 square feet. It stood at the corner of 15th and High, where Mershon Auditorium now stands. It originally was the home of William Neil, for whom Neil Avenue is named, and whose farm was bought as the location for the then-new University. A businessman named J.J. Rickley bought it in 1866, then sold it to the University in 1871. By the 1920s, it was decided High Street had become too busy for a president’s house, so after Pres. Thompson moved out, it served as the home for the School of Music until it was torn down in 1949.  (See article below for more information on the Rickley House.)

The last President to live on campus was Pres. Novice Fawcett, specifically at the mansion now known as the Kuhn Honors and Scholars House on 12th Avenue above Mirror Lake. The house was first built to be the residence of the astronomer at McMillan Observatory, which used to occupy the site just about where the Faculty Club stands now. OSU Architect Joseph Bradford (see our first “Bleeds Scarlet and Gray” posting) designed it. President George Rightmire and his family were its first occupants, and the Fawcetts vacated the residence in 1972. 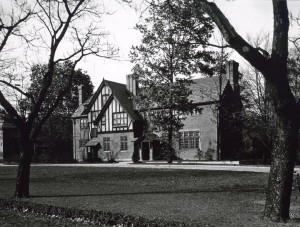 The next OSU President, Harold Enarson opted not to live on campus, so a residence was procured in 1972 at 285 Croswell Road in Clintonville, just north of Whetstone Park. At the time it was bought for the president, the house was eight years old, had three bedrooms and a total of 7,000 square feet. Pres. Edward Jennings also lived there, but the house was sold prior to President E. Gordon Gee’s first term, because it was no longer considered suitable for hosting University events, both in space and parking.

A house on Commonwealth Park in Bexley (not pictured) was then purchased with University Foundation funds. President E. Gordon Gee, the new president at the time, wanted a home spacious enough for entertaining but one that was also located in a residential neighborhood. It had five bedrooms and 4,800 square feet and was more suitable to hosting University events. After Gee’s term ended, Pres. William Kirwan moved there, in 1998.

Kirwan then moved into the current University Residence, on North Drexel Avenue in Bexley, in 2000. Ron and Ann Pizzuti donated the house to the university in exchange for the OSU residence at Commonwealth Park.  The house is nearly double the Commonwealth House in size, at approximately 8,900 square feet.

Check out Buckeye Stroll for more information on the two on-campus residences! 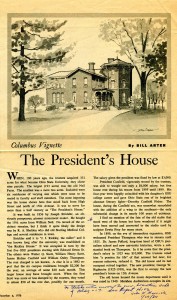