Cramped quarters at the Towers

You may have read the recent Columbus Dispatch article, “Dorm fixes will squeeze Ohio State students.” If you haven’t, here’s a short synopsis: Many freshmen this year will be living four to a room, instead of two to a room, because two residential halls will be under construction. 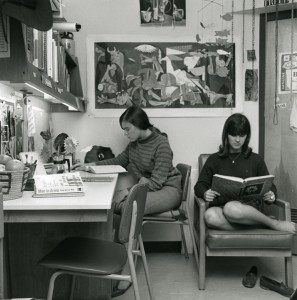 Except for the temporary nature of the cramped quarters, doesn’t that sound familiar? For those of you who lived in Lincoln and Morrill towers as OSU students, a tight living space was just a fact of life. You and three other people, whom you’d soon know very, very intimately, showed up on move-in day and tried to stuff all of your belongings into an area that, by today’s standards,  seems like it was designed to be a walk-in closet, not a living space for four adults.

How did it happen that Lincoln and Morrill towers – so mod for their time – came into existence?

In 1962 the university’s master plan included the construction of a new “focal point” along the Olentangy River, due to the increasing number of students and limited dorm space. It appears that the master plan at that time called for the construction of six towers, all alike, though of course only the first two–Lincoln and Morrill–were built. (They opened in 1967.) 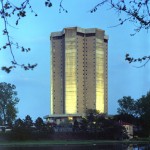 The plan also called for other facilities, like a student union–which resulted in the construction of the Drake Union–as well as a boat house and support facilities (post office, shopping, etc.) that were never built.

As to why the other dorms were never built, our files are not conclusive. There was a lot of controversy within the campus community and various departments as to where to place the first two towers. Also, several utility lines had to be relocated, and since the buildings would be next to a river, a pump house and other considerations had to be made. Meanwhile, other dorms, such as Drackett Tower, were already under construction.

No matter. Lincoln and Morrill towers have become iconic structures of the OSU campus, and to help you remember all of the good times you had there as students in those very tight quarters, we’ve provided some more photos below. 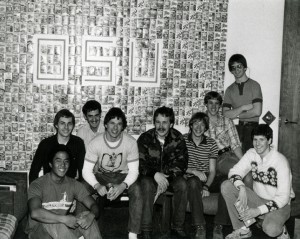 Location and date unknown, but even in tight quarters, a creatively decorated wall can go a long way 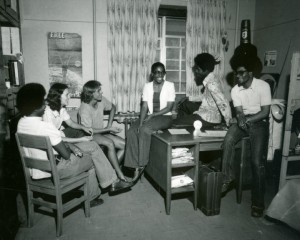 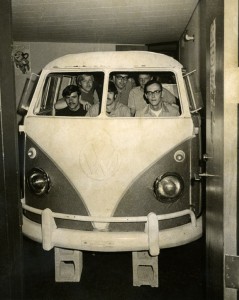 VW bus arrives at 14th floor of Lincoln Tower, 1970. Somewhere, someone made a wrong turn...