Dr. Kevin Cooley received the 2020 Lucy Shelton Caswell Research Award in 2020. He holds a Doctorate in English Literature from University of Florida, and is now Professor of Liberal Arts at the Ringling College of Art and Design. Below, Dr. Cooley discusses his fascinating research into the life of cartoonist George O. Frink.

I found out I had won the 2020 Lucy Shelton Caswell Award while absent-mindedly scrolling through my email in the snowy parking lot of a gas station somewhere in Pennsylvania. I was driving home to visit family in Buffalo for Christmas, and I probably should’ve been enjoying this rare opportunity to neglect my inbox.

For once in my life, I am glad that I was checking my inbox on a day off.

I didn’t know it when I first began the research that would secure me this award, but I was about to be blessed with an opportunity to access the most thorough collection of comics resources in the world, and to make my project come to life. My research on George O. Frink began around 2017, when I started work on a PhD dissertation focused on the production, politics, and history of queer animated cartoons. After reading up on J. Stuart Blackton’s drag performances, Krazy Kat comics, and the frequented drag gimmicks of turn-of-the-century comic strips, I was rapidly arriving at a conclusion that queer cartooning had a much longer history than most writing on the subject was willing to give it credit for.

I doubled down on this conclusion when the folks at the Sequential Art Workshop in Gainesville, FL introduced me to Lucy and Sophie Say Goodbye in the Spring of 2018. This comic strip was a shocking and overtly queer one for 1905, starring two women whose prolonged kisses on the lips wrought chaos on the world around them. I don’t know if you can “triple down” on a conclusion, but I think that’s exactly what I did in the summer of 2019, when I paid an initial visit to the BICLM to investigate the queer origins of cartooning. There, I was introduced to Caitlin McGurk’s article “Lovers, enemies, and friends: The complex and coded early history of lesbian comic strip characters,” which speculated that George Frink was the creator of Lucy and Sophie Say Goodbye.

Rapidly, my research on early queer comics began to triangulate on Frink and his work. It struck me as utterly impossible that Frink’s best-known comic strip, Circus Solly, had not influenced the template mechanics of the classic Warner Bros. style chase cartoon. The strip matched Looney Tunes’ Bugs Bunny/Elmer Fudd gags right down to its nutty and elastic clown of a protagonist, who used drag performances and impossible physics to escape from his pursuers. It was hard to believe that this strip, which ran in many of the local newspapers that the future animators of Warner Bros’ “Termite Terrace” would’ve likely been exposed to as a child, did not influence some of the acrobatic and gendered play of cartooning to come.

The access to these resources that I enjoyed led to some exciting finds I am happy to share here today—finds that I unpack at much greater length in George O. Frink: A Pioneer in Queer Cartooning, which has been released in two parts at The Middle Spaces. My pieces at The Middle Spaces offer not only a point-by-point breakdown of the case for Frink’s creation of Lucy and Sophie Say Goodbye, but a glimpse into the life of this cartoonist whose work connected queer life and cartoonish gimmicks. For those who want the Sparknotes version, though, the most succinct summary of my overall findings follows shortly. Some of these findings were made in my 2019 trip to the BICLM, some of them in my time at the BICLM on the Lucy Shelton Caswell Award, and some of them on late pandemic nights in digital archives.

George O. Frink was born in 1874 in Marion County, Indianapolis, to Erastus O. Frink and Charlotte Frink. Erastus—an inventor, engineer, and patent solicitor—used his talent to design blueprints and sketch out patent designs, as he did when he designed the original Gatling gun. Frink shared his father’s talent for drawing, but used it very differently, and was affiliated with the Sun Publishing company of Indianapolis by the age of 19 (at the latest). He was also affiliated with one Bertha May Hiers at 19, but only very briefly—they married in late 1893, and divorced by early 1896. Frink never remarried, and he began to disappear from public life around 1915. He died in an asylum on November 17th, 1932.

Not long after divorcing Bertha, Frink moved to Chicago and entered the thriving art scene there. Frink began at the Chicago Daily News, where he would create his best-known comic strip, Circus Solly. He would stay at the Chicago Daily News until 1911, where he would bring an obvious copycat of Circus Solly, now rechristened Slim Jim and the Force, to World Color Printing.

During 1904-1905, Frink drew cartoons for The Chicago Tribune as well. These included some Sunday incarnations of Circus Solly, as well as one-offs like Mrs. Clubberly Clubber. Two anonymous comic strips also appeared in The Chicago Tribune at this time that were clearly by the same hand, and looked incredibly similar to Mrs. Clubberly Clubber—The Career of Cholly Cashcaller, and Lucy and Sophie Say Goodbye. 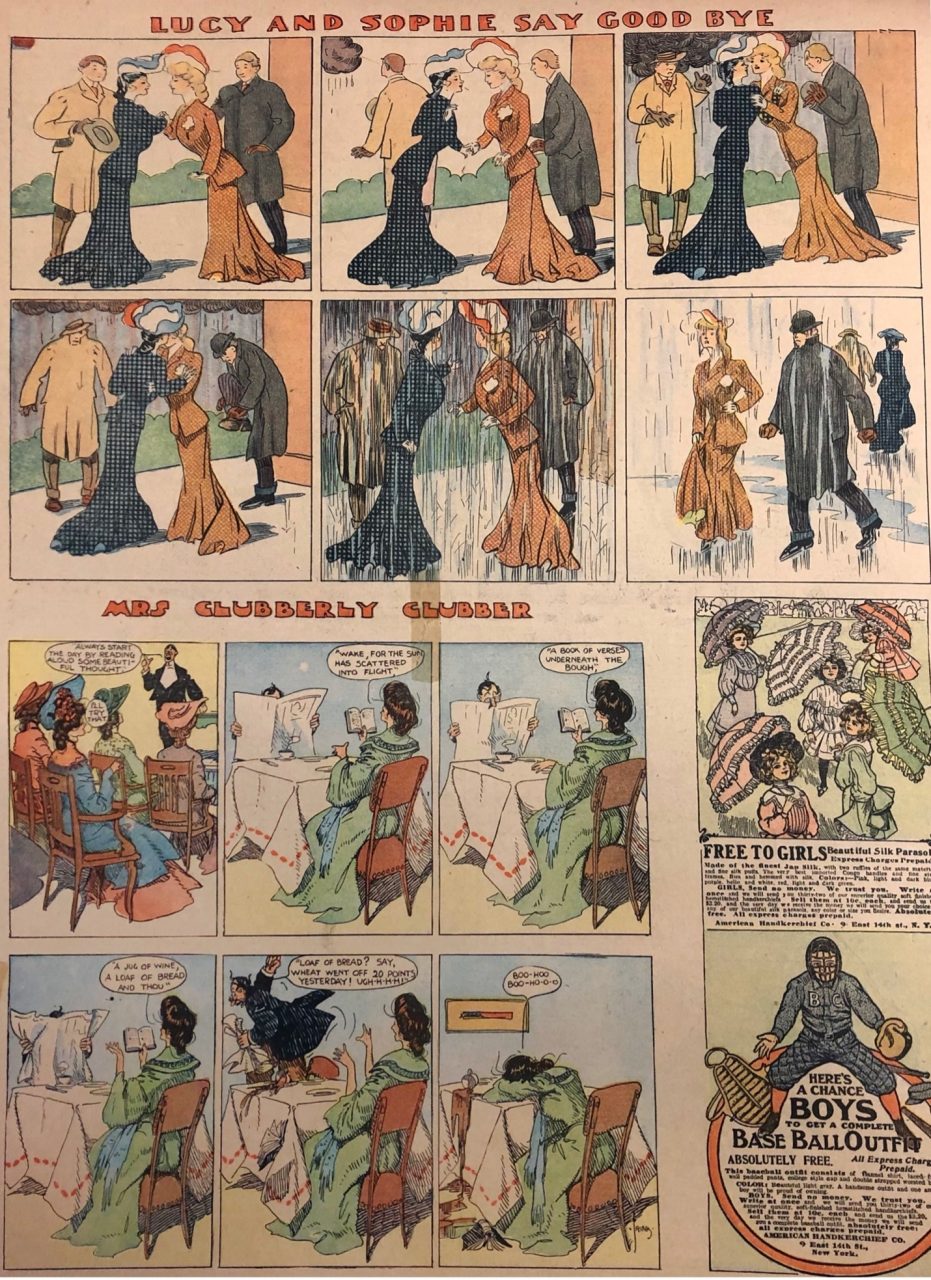 Here and there, these two strips are very scarcely signed with a strange character that at times looks like a “C,” and at other times resembles a “G.” Frink used this C/G character in another volume that can be definitively attributed to him, Peck’s Bad Boy and the Circus. This strange signature (coupled with references to details in these comics pulled straight from Frink’s life, not to mention a unique way of drawing elephants across different media), leaves little doubt in my mind Frink created these two comic strips. Lucy and Sophie Say Goodbye ends with its lovestruck lesbian protagonists being carted off to an insane asylum (just as Frink was later in life), and Frink’s role in its creation is an undoubtedly an important detail to establish.

Frink’s run on Lucy and Sophie Say Goodbye ended abruptly, in a half-finished strip from October of 1905. And yet, he would continue to explore queer themes (only slightly more subtly) in his other comic strips moving forward: from his iconic hobo acrobat character, to obscurities like Sammy Spankem and The Picture Show (which simulated animation, or an animation storyboard).

There is much to be gained, though, from looking closer than the broad strokes. Two fully-funded weeks in the archives at the BICLM gave me the time and the resources to furnish my writing with some absolutely incredible archival finds I’m happy to share here today. 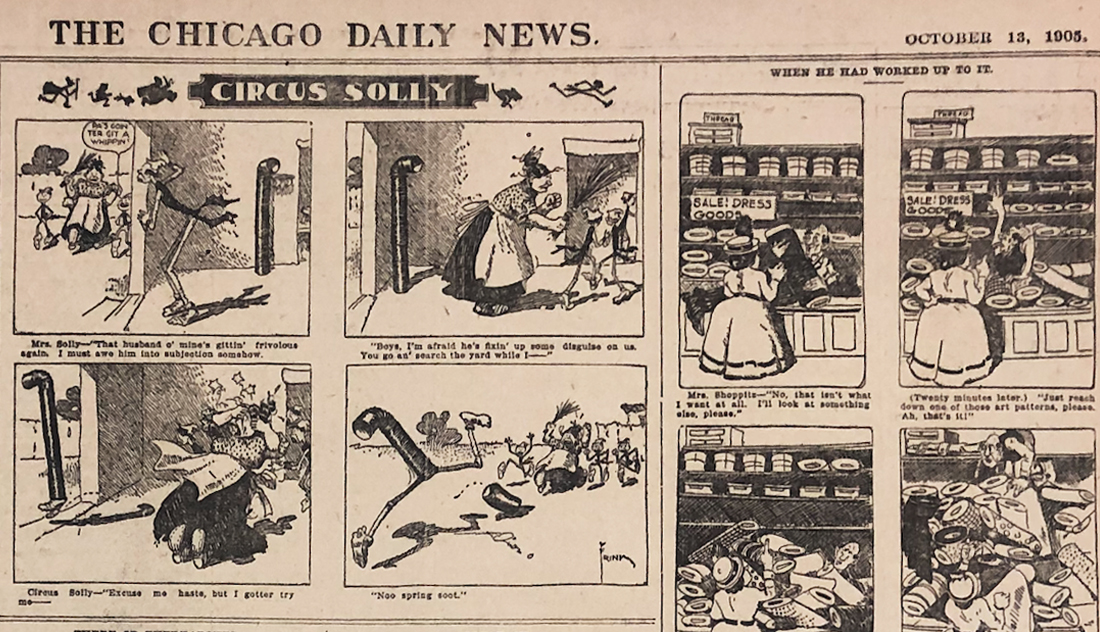 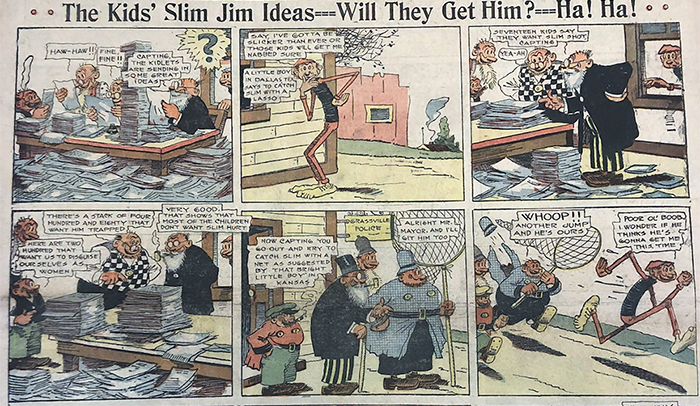 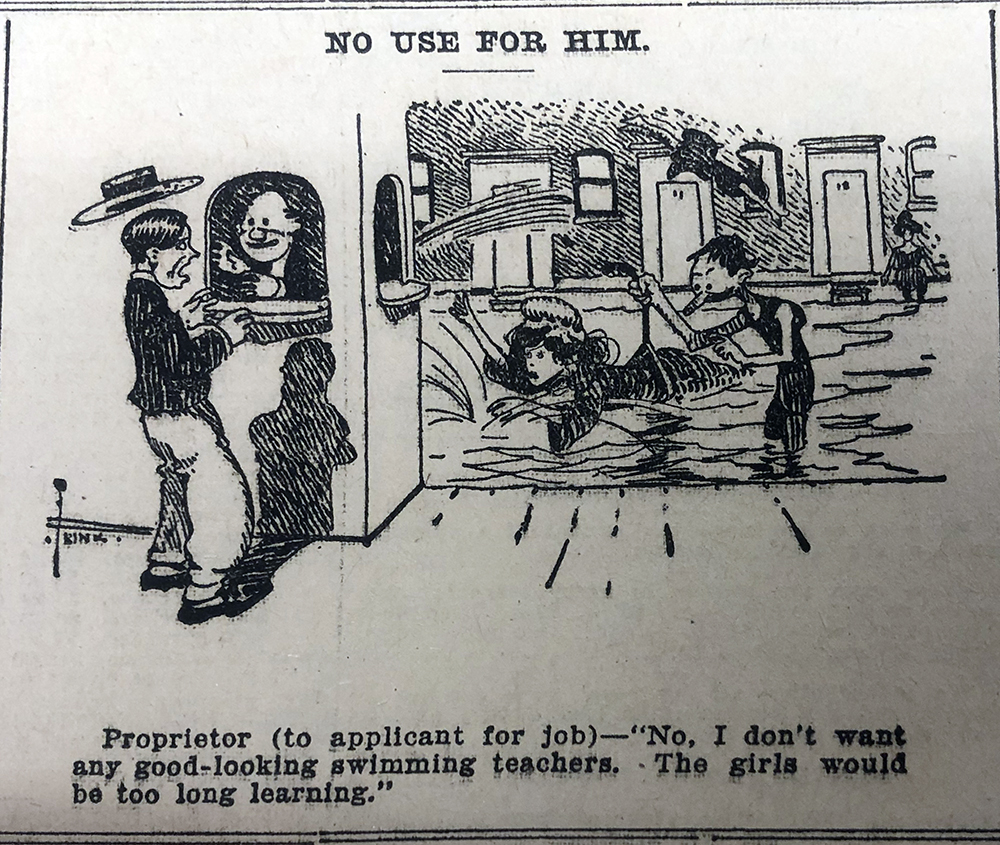 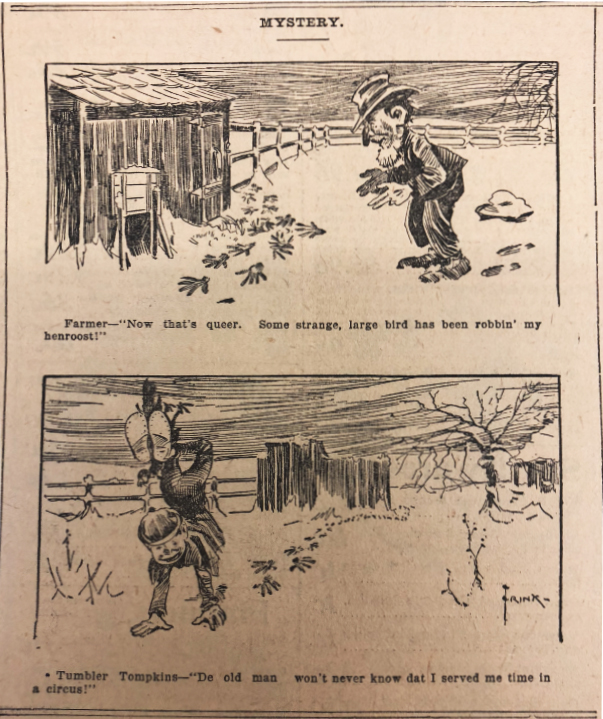 The trip was, to say the least, filled with its share of surprises. I was blown away to find out during my last three days of research that the Billy Ireland had a yet-to-be-sorted collection of Chicago Daily News issues—a paper that has been difficult for me to track down outside of grainy microfilm prints. I didn’t have enough time left to read these papers thoroughly (and I would have been hesitant to handle them more than absolutely necessary, as they cost only a penny in 1901, and are extremely brittle about one-hundred and twenty years later). The best option, then, was to carefully photograph each of the issues and review my photographs of them in the meantime. I learned a valuable lesson in this task: anyone who thinks archival work is not physical work has never photographed ten years worth of the Chicago Daily News—each page more brittle than the last, and ready to stick to the next—for 18 hours spread over three days. With kindness and brilliance of equal proportions, Susan Liberator rigged together a stand made from cardboard boxes that would allow me to capture the full scope of the images from a higher height—reducing the strain that bending thousands of times at the exact right angle it would take to get my camera to focus on the faded lines of the browning newsprint.

As you can see, the folks at the Billy Ireland were incredibly accommodating, and beyond generous with their time, labor, and considerable skills and knowledge. Miranda Rike, Emma Halm, and Hannah Kramer—who were student assistants in the library at the time of my research—were immensely helpful in both preparing materials for my visit and keeping the (gradually multiplying) materials I requested organized. I went into the library with a clear vision for the materials I would need to see—but naturally, new finds led to new questions, and new questions led to the need to consult more materials. I am still blown away by the speed and efficiency with which the archival staff conjured up sheaf after sheaf of newsprint gold.

I hope I can return to Columbus soon and do it all over again. The Lucy Shelton Caswell Research Award program is an incredible resource, and I encourage anyone working with comics who has an idea to develop, but is lacking the funds to develop it, to apply for it today.