Gould’s Gold: A Brief Glimpse into the Chester Gould Collection
by Katy Faulkner

Bio: I originally started working at BICLM as a student employee in the fall of 2013 up until I graduated from OSU in 2017. Since then, I have been lucky enough to come back to work temporarily as an archives project assistant and in my current role as a collections preservation assistant. I graduated with my MLIS with a focus in Archives Management from Simmons University in January of this year.

A large part of my job is to unpack and assess the condition and preservation needs of collections as they arrive at the Billy Ireland Cartoon Library and Museum. This is impossible at the moment as I am currently working from home. To fill the collections-shaped hole in my heart, I thought it would be nice to share a few items that stuck out to me while unpacking the Chester Gould Collection. The Chester Gould Collection was generously given to us by the Chester Gould/Dick Tracy Museum in Woodstock, Illinois.

Chester Gould is best known for creating the hugely popular detective comic strip, Dick Tracy, in 1931. The titular character was a yellow-clad detective who pursued a variety of wacky criminals with equally colorful names, such as Flattop, Pruneface, Flyface, and Miss Egghead. The storylines in Dick Tracy often reflected real-world events that were happening at the time, including the Space Race and the hippie movement. The strip highlighted the use of forensic science and technology, including the iconic 2-Way Wrist Radio, which shares similarities to the smartwatches of today. Gould worked on Dick Tracy for over forty years, before retiring in 1977. The drawing table on which Chester Gould worked is proudly on display in the Treasures Gallery of our museum.

During my time at the Billy Ireland, I have found that processing collections that contain fanmail (and the occasional hate mail) is always a challenge for me because I want to read through all of the letters to see what passionate readers of a strip had to say about it. This collection was particularly challenging for me as the library received binders and binders full of fanmail that Chester Gould had been sent over the years. While I fought the urge to read through every letter individually, there are a few that happened to catch my attention. For instance, this fan sent Gould a coin from their own personal collection that is allegedly from 117 A.D (Fig. 1).  There are no defining features on the coin and I am sadly not trained in identifying ancient currency, so we will have to take the sender’s word for the coin’s date. Although I’m not aware of any direct connection between Dick Tracy and ancient coins, it clearly seems to have made an impression on Gould since it was kept in context with the letter for so long. Although it is a small part of the larger collection of letters, I thought it was a really unique and thoughtful gift for someone to send. 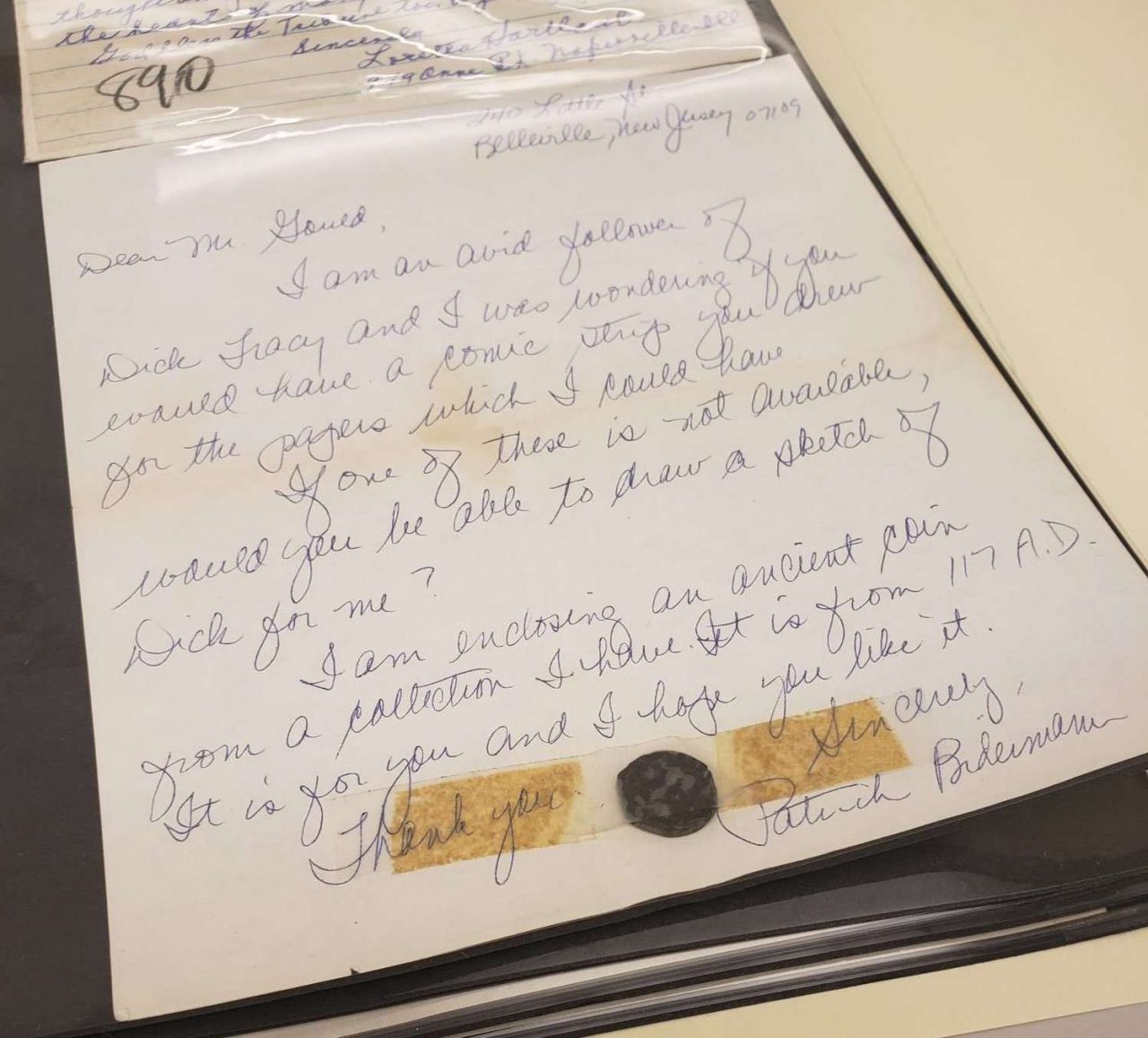 There were other letters in this collection that also stuck out to me, but perhaps for more obvious reasons. Chester Gould received letters from multiple presidents of the United States over the course of his life, including (but in no way limited to – these are just the ones I managed to take pictures of) Richard Nixon, Jimmy Carter, and Ronald Reagan (Fig. 2). Although it isn’t directly addressed to Gould as he had passed away twenty years prior, the collection also contains a letter congratulating the Chester Gould/Dick Tracy Museum on the 75th anniversary of Dick Tracy from Barack Obama when he was still a senator of Illinois (Fig. 3). With the continued popularity of Dick Tracy, it’s not all that surprising that Gould would receive a letter or two from the president. Cartoonists, particularly those in the first half of the twentieth century, were very much considered celebrities in their own right. However, the range of presidents that sent Gould letters is quite impressive and serves as a testament to the lasting nature of his work. 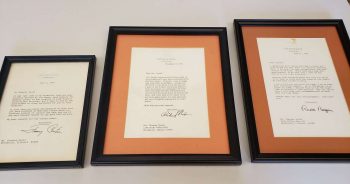 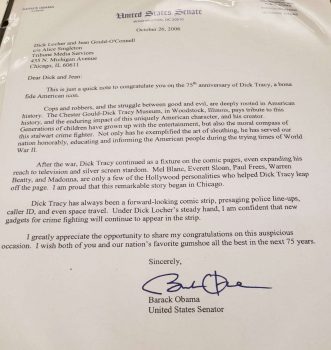 Gould received numerous awards for his work, many of which are included in the collection. However, the one that stood out to me the most could perhaps be considered the least prestigious. Chester Gould received an award declaring him “Peanut Butter Man of the Year” in 1972. Gould received this award from peanut farmers for raising awareness about “one of the single most nutritious foods available to Americans,” through his character, Homer “Peanut Butter” Barley.  Unfortunately, I didn’t manage to snap a picture of this surprisingly large award. Luckily, the Chester Gould/Dick Tracy Museum recently posted a great photograph on their Facebook page of Gould posing with the award right next to a big jar of peanut butter (Fig. 4). Maybe it’s not the most remarkable of awards, but I’m not sure that anyone has won this award before or since it was given to Gould, which makes it quite a unique item to have, in my opinion. 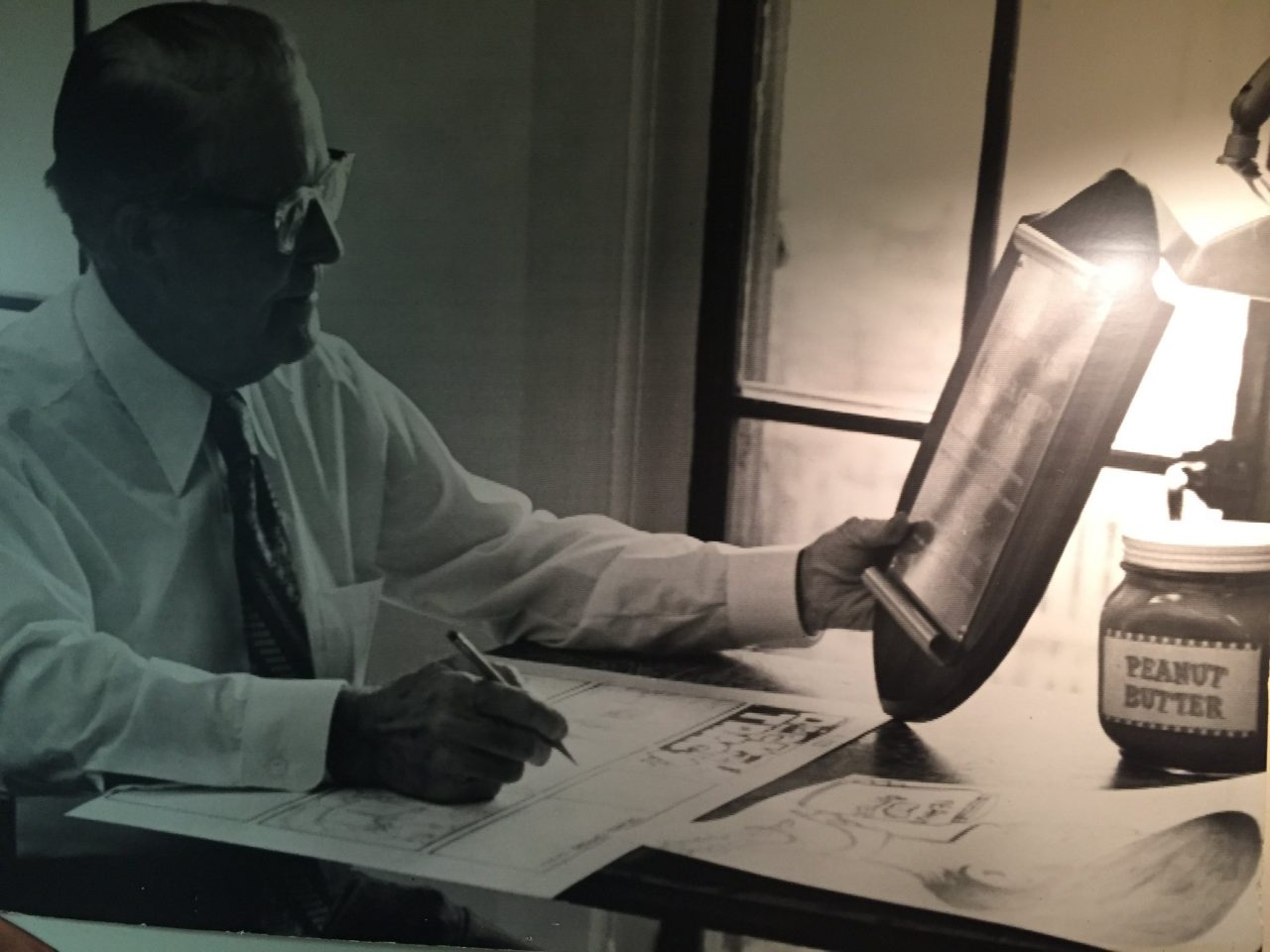 Although comics are notorious for never having characters permanently die, Gould was never afraid to kill off his villains and even some of his heroes. In fact, Gould killed off his characters so permanently that he established a “real” cemetery for some of them in his own yard. Gould kept the cemetery in his yard for years and seemed quite proud of it. Since they were built in 1949 and had a long-term exposure to the elements, nearly all of the original grave markers did not survive. The Chester Gould/Dick Tracy Museum was able to save only one. They did, however, recreate the cemetery as part of one of their exhibits and we were fortunate enough to receive the new grave markers as part of their donation. Like the Peanut Butter Award, I unfortunately don’t have a picture of these grave markers. However, the Chester Gould/Dick Tracy Museum’s Facebook page has posted a wonderful picture of the last remaining grave marker (Fig. 5), as well as a photograph of Gould and his family in the original cemetery (Fig. 6). Gould’s dedication and his ability to make his characters feel real are exemplified in this small act that was originally just part of a joke. 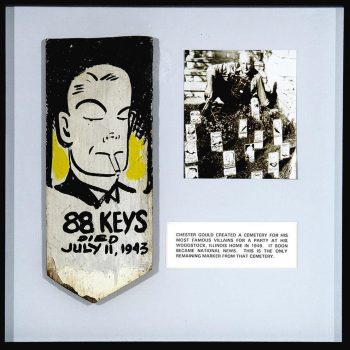 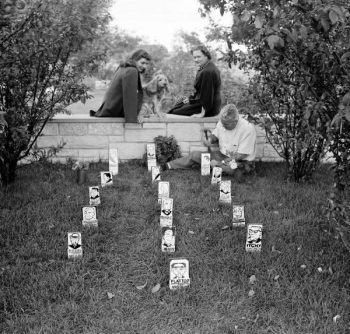 Before they met their demise, Gould’s villains were often differentiated by and named according to their physical features, which, in classic comic strip fashion, were often grotesque. Perhaps even scarier than the original drawings are these rubber Halloween  masks of Dick Tracy villains, which arrived to us in a clear bin (Fig. 7). I greatly appreciated this choice of container because I would not have enjoyed being surprised by these guys. However, it also made the bin look a little bit like it contained the trapped spirits that had escaped from Gould’s graveyard. Pushing all notions of Pandora’s Box aside, I braced myself and opened the container of melting faces (Fig. 8). They have since been moved into archival boxes that are slightly less ominous looking, which will also likely receive labels warning anyone opening them in the future of their contents. All joking aside, I think these masks really highlight Gould’s skill for creating villains that were not to be trifled with and why they are such an iconic part of the Dick Tracy legacy. 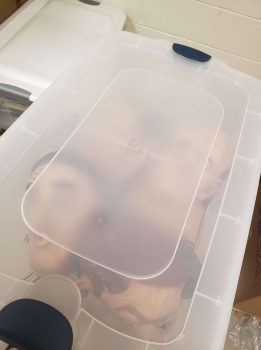 These are only a handful of items that stuck out to me in this vast collection and are in no way representative of all the collection has to offer. As of right now, the Chester Gould Collection is still being processed, but staff are available to answer any questions about the collection, Chester Gould, or Dick Tracy at cartoons@osu.edu. When the facilities open back up, materials will be available to request in the Lucy Shelton Caswell Reading Room at the Billy Ireland Cartoon Library and Museum.

Student post: How Comics and Zines Influenced my Art Practice