Student Post: Impacts of Destruction and Building in “The Structure is Rotten, Comrade”

March 19, 2020 / Caitlin McGurk / Comments Off on Student Post: Impacts of Destruction and Building in “The Structure is Rotten, Comrade”

Every so often, the day to day tasks of working at the Billy Ireland allow you to come across a book, drawing, or strip that seems like it was made for you. I had this moment when a bright red book popped out of the stacks, titled The Structure is Rotten, Comrade. As an architecture student, the immediate implication of destruction, design, and rebuilding’s effect on social interaction fascinated me. Throughout the book, Viken Berberian and Yann Kebbi utilize both narrative and drawing to craft a story which thoroughly explores the power that buildings—and the architects that create them—have over the urban condition.

Frunz, the book’s protagonist, is an architect working for his father in the rapidly developing city of Yerevan, Armenia. Frunz’s father, who works for the Radical Architecture Department, seeks to create a brutalist utopia out of concrete. However, to create this utopia, a complete clearing of all previous buildings must occur. In his mind, all of the old must be rapidly cleared away to make space for the new. Wrecking balls swing wildly, destroying the city’s historic buildings as Frunz leads students on an architectural tour. As the group walks through the streets of Yerevan, Kebbi’s pastel drawings suggest the beginning of a revolution. With his group, Frunz walks through an environment of crumbling buildings and displaced people perched on Alvar Aalto stools— their only compensation for the destruction of their homes. The increasing tension between destruction and building simmers in Yerevan’s streets until discontent boils over. 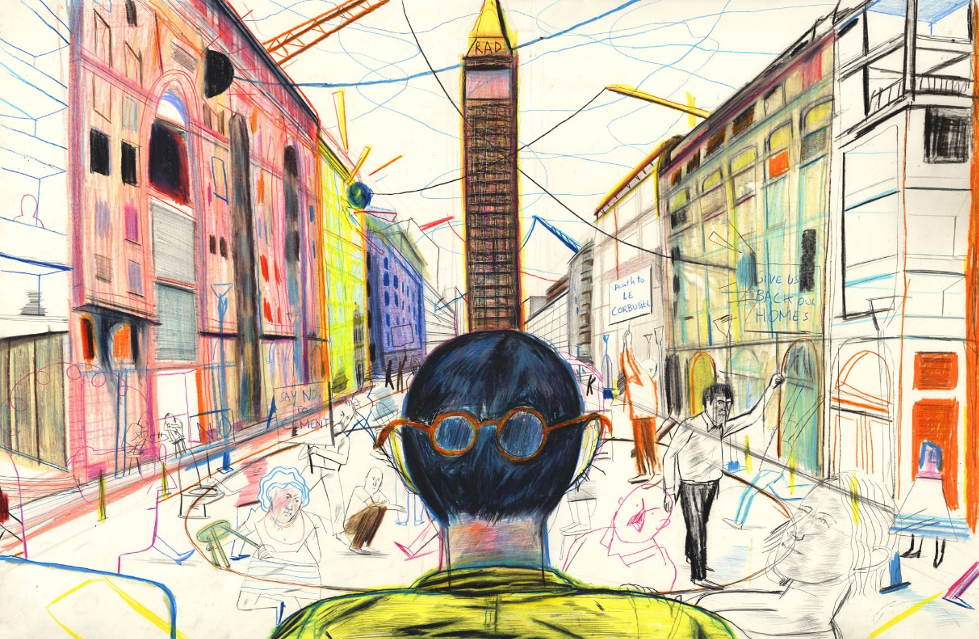 The political instability in Yerevan is stressed in Yann Kebbi’s pastels. While Frunz walks through the city, there is a mixture of buildings, people, and cars at entirely different stages of completion. Each element feels fuzzy and slightly out of touch with the other parts of its environment, even though they inhabit the same space. Next to a person who is only an outline there may be a fully rendered wrecking ball, smashing into a building made from a block of solid color. Through these depictions, the elements become disassociated with each other, enhancing the idea that the people and their environment are at odds with one another. Kebbi’s drawings feel necessary for the viewer to understand the turmoil surrounding Yerevan. A fully rendered Frunz has his ankles grabbed by a homeless man who only exists as an outline. These outlined people feel like ghosts in their own city—a place being destroyed because of one man’s vision, leaving them hollow and incomplete. 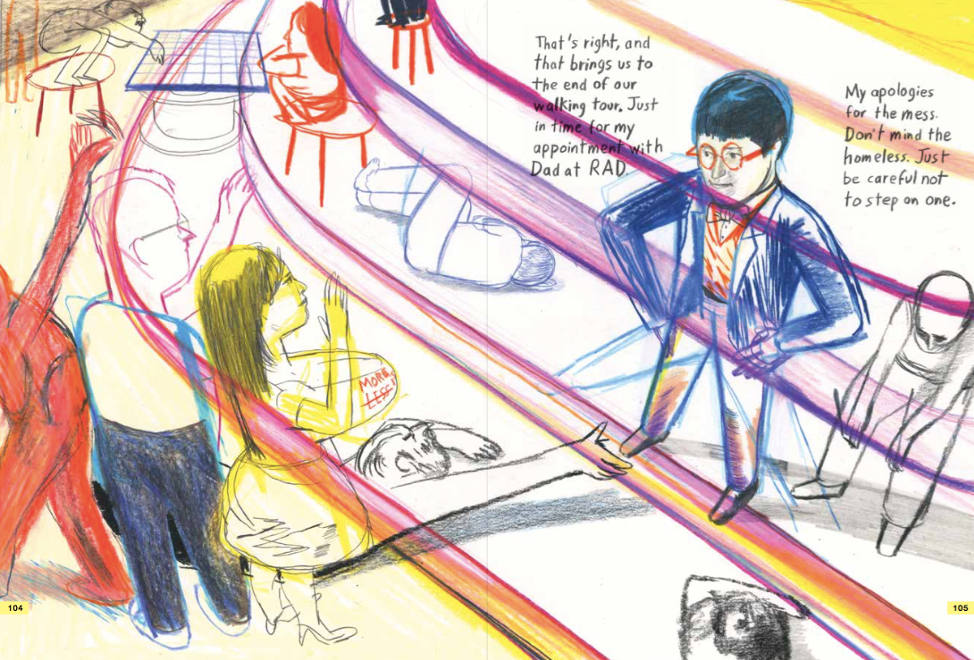 Underneath the graphic aspects, the implications of the plot are politically charged. The author, Viken Berberian, crafts a narrative which lays out the frustrations felt by the Armenian people. In Frunz’s world, the architect was the liberator, freeing the people and allowing them to have more. His idealism was directly at odds with the existing city, therefore it had to be destroyed to make way for the new, better system Frunz and his father would impose on the citizens. Berberian’s characterization of Frunz touches on a branch of architectural study that gained traction in the 20th century. Various articles focused around a critique of the architect as a “hero” that imposes radical changes on a population due to their own moral or ethical belief. Frunz and his father are the “hero architects” insisting on the correctness of their vision. 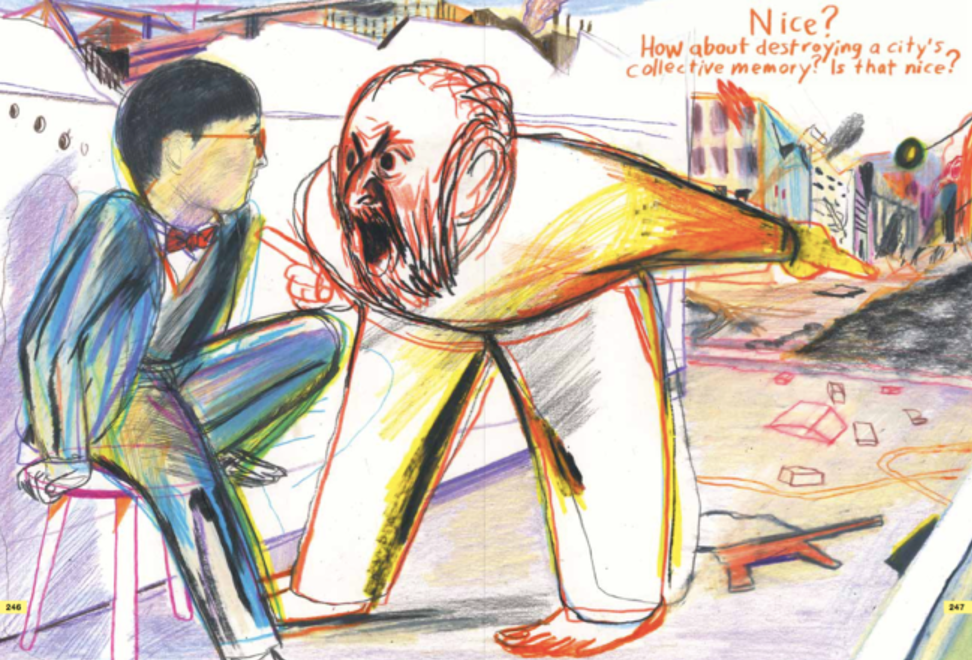 However, they don’t account for the people’s attachment to the structures that already exist. Reflected in the citizens is the desire to retain their personhood, which is closely entwined with the city itself. In this case, increasing social unrest is a direct result of a faulty design that relies on destruction and incompetent, or uncaring, government leadership. The desire for a collective identity—which is based around the buildings that compromise the city— exposes how Yerevan’s political system and Frunz’s brutalist utopia have failed the citizens. A violent revolution is sparked by the failure to assuage the hopelessness and anxiety among the population. As expected, the revolution is fundamentally misunderstood by Frunz’s idealistic father, who tells the people he can restructure his designs. The people emphatically respond, “No restructuring, comrade. The structure is rotten.”

For people who are interested in architecture, urbanism, or revolution, this book would be a fantastic read! The Structure is Rotten, Comrade is available in the Lucy Shelton Caswell Reading Room at the Billy Ireland Cartoon Library & Museum.

The Structure is Rotten Comrade

The Structure Is Rotten, Comrade

A comics-inspired playlist by the Billy Ireland Cartoon Library & Museum