We are thrilled to highlight the fascinating research or Dr. Daniel Worden, one of our three 2018 Lucy Shelton Caswell Award winners. Below, Worden shares some of the research he has conducted at the Billy Ireland Cartoon Library & Museum so far, with plans for an extended visit in 2019.

My academic life began with comics. Indeed, my first published article in 2006 was about gender and affect in alternative comics, and since then, I have been amazed by the growth of comics studies as an academic field, under the guidance of so many talented scholars, archivists, librarians, and artist-teacher-scholars. So it was with a great deal of honor and intellectual anticipation that I arrived at the Billy Ireland Cartoon Library & Museum with the support of a Lucy Shelton Caswell Research Award. Back in 2006, when I was finishing up graduate school,  I never would have expected to be able spend weeks doing research at a library & museum devoted to cartooning and comics art, because of a research award designated for comics studies scholars. I feel incredibly lucky to be a part of comics studies at this moment.

During my stay at the Billy Ireland Library & Museum, I was mainly focused on the early history of oil and comics – it is the crux of the new book I am working on, tentatively titled “Oil Comics: Iconographies of Energy, Environment, and Motion.” In the project, I chart how comics and oil have a shared and multi-layered history. That history reaches down to the basic materials of comics – India Ink’s “carbon black,” commonly derived from petroleum since around the 11th century – to the kinetic imaginary of comics, of bodies and vehicles in rapid motion, surrounded by speed lines, unhinged from gravity and mortality, set loose from metabolic limitations and set free in synthetic suits and space. The comics medium’s intertwined history with the modern petroleum industry makes it a site where we see oil revising our ideas of space, time, agency, and possibility. At the Ireland Library, I was able to gather the raw materials for a history of oil in early comics.

Caricature and cartooning gave shape to the emergence of the petroleum industry in the United States. Even today, a basic google image search for “Standard Oil” produces turn-of-the-century cartoons in its initial ten results. These familiar illustrations represent Standard Oil as an octopus, its founder John D. Rockefeller as a suited miser. A classic Udo Keppler octopus cartoon from Puck, for example, portrays Standard Oil as a tentacled monster, wrapping itself around all aspects of the industry and everyday life. 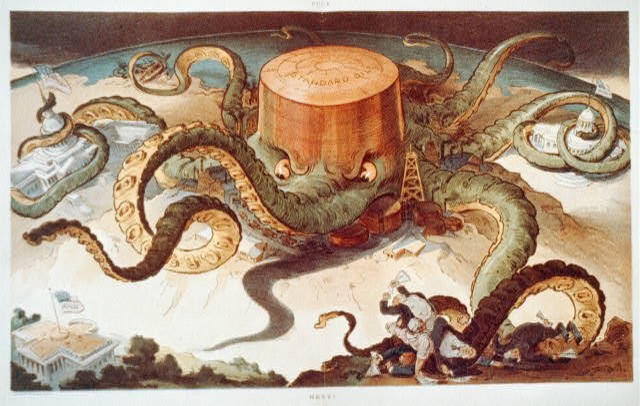 In William Randolph Hearst’s New York American and New York Journal newspapers, the cartoonists Gus Mager, Frederick Opper, Thomas Powers, and others would routinely caricature the “Oil Trust” in the first decades of the twentieth century. Mager’s “Oily John” strip depicts a lanky John D. Rockefeller as a detective who repeatedly thwarts the plots of the “small dealer,” the independent oilman out to sabotage the trust. The “Oily John” strips are fascinating, with their simple line work and slapstick narratives. And, perhaps most importantly, I found these not because I knew to look for them, but because comics scholar Benoit Crucifix was looking at a scrapbook of Mager’s work in the reading room one day. He asked if I had seen these, and I hadn’t. So, thanks so much to Benoit, and to the Ireland Library & Museum for providing a place for comics scholars to work and communicate. 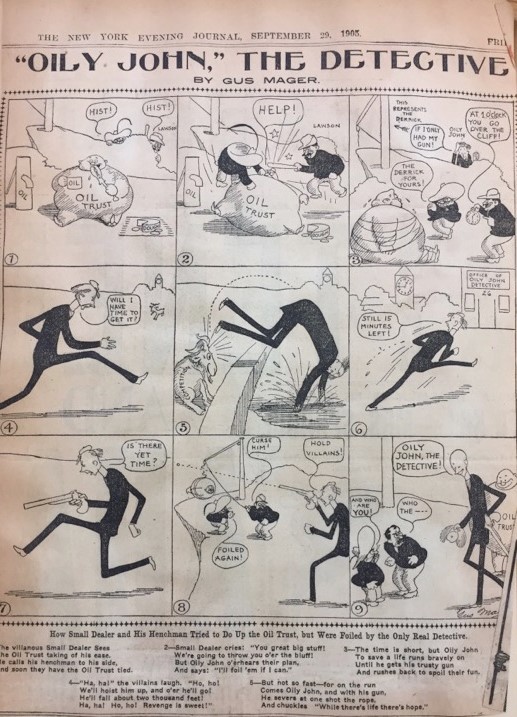 In one series of Frederick Opper cartoons about William McKinley, “M’Kinley’s Minstrels,” the oil trust appears among others in blackface, a racialization of the trust as a trickster figure. In others, the oil trust appears alongside other portly trust figures, engaging in madcap antics, often at the expense of normal citizens. 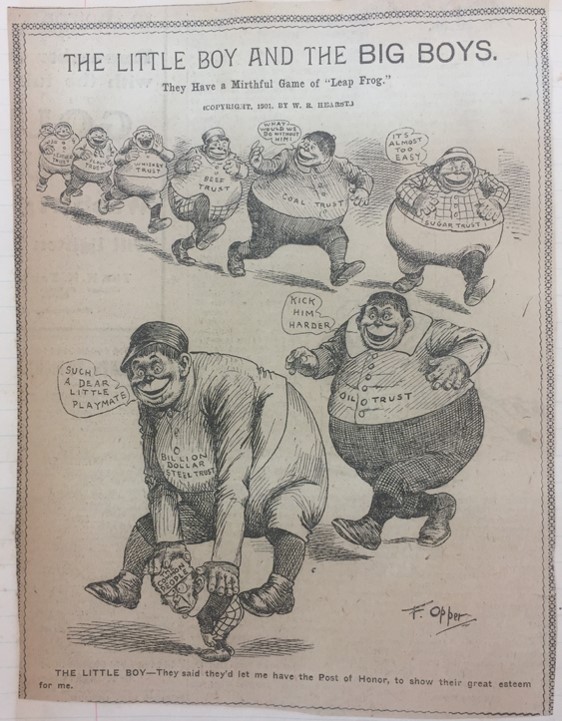 In Thomas Powers’s cartoons, Rockefeller and Standard Oil take on a global scale, erecting derricks around the earth. 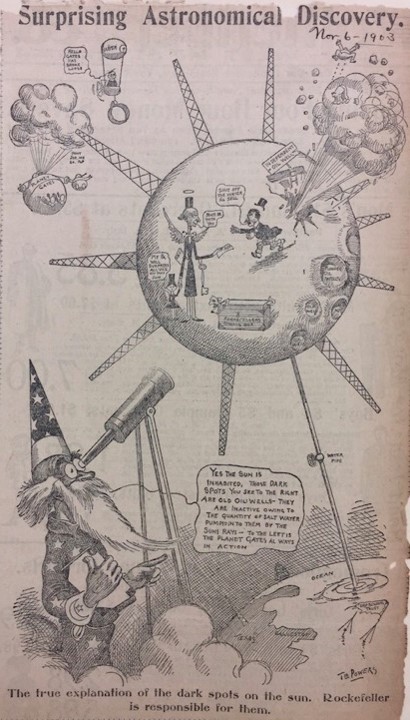 These motifs trade in available tropes – the octopus image harkens back to the maritime imaginary of the whale oil industry, and the oil trust as minstrel traffics in racial typographies to cast the trusts as a gleeful egotist, comedic in his transgressions yet endearing in his familiarity. 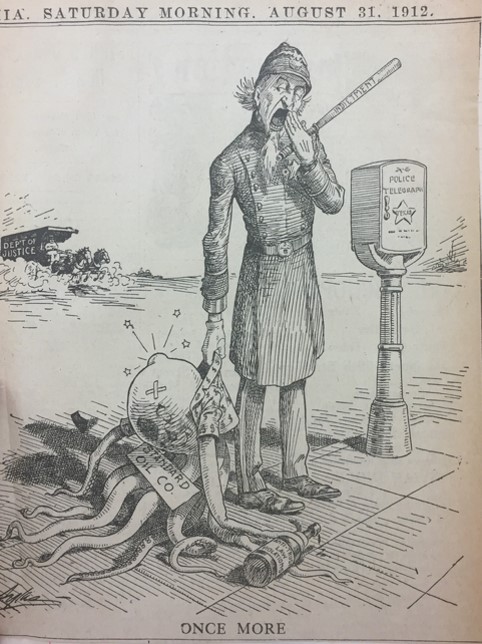 By 1912, the octopus and the miser have clearly become familiar tropes, and even clichés, in cartoons that seem to offer a critical perspective on the tiredness of these ideas and their persistence. For example, Standard Oil is represented as a drunken octopus, a common representation of the trust’s monopolistic grasp on oil extraction, transport, refining, and sales become humdrum for the yawning police officer. And in another, Rockefeller’s wealth is no longer of interest to caricatures of either China or the US. What these images share in common is a struggle to find a visual mode of representation for the petroleum industry, the industry’s behaviors, and even the speed and scales afforded by fossil fuels. As is made clear in other editorial cartoons of the period, there is something of the sublime to the oil industry, and editorial cartoonists aim to render that in familiar figures, whether through the hybrid man/octopus of Theodore Roosevelt, during a campaign finance scandal involving Standard Oil money, or in drawings of fossil-fueled trade bridging two continents, as in Winsor McCay’s cartoon of commerce between North and South America. 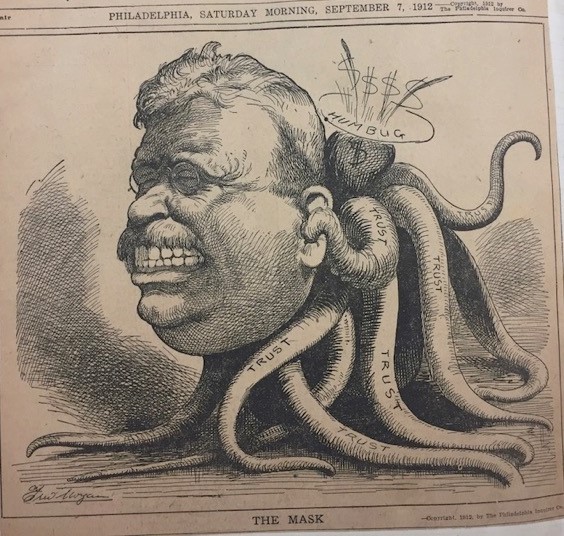 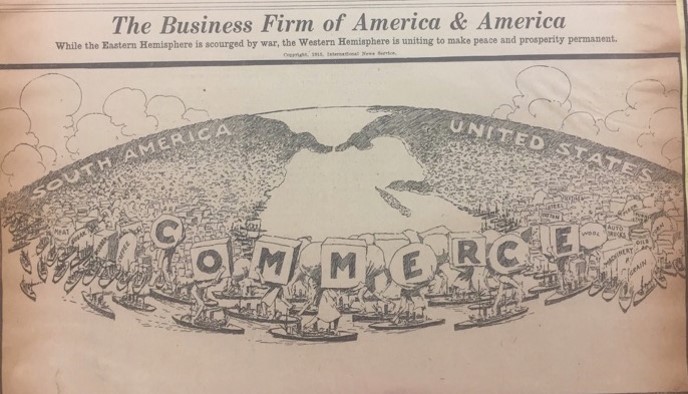 The register of direct representation is not the only mode through which comics and oil intertwine in this early period. Automobiles and airplanes are metaphors for time, dominance, viewpoint, and conflict. In Winsor McCay’s and Robert Carter’s cartoon of Uncle Sam in an airplane and an automobile, respectively, the nation is characterized through the speed and perspective afforded by petroleum-powered vehicles.  These modes of movement become ingrained as figures for narrating politics and history. 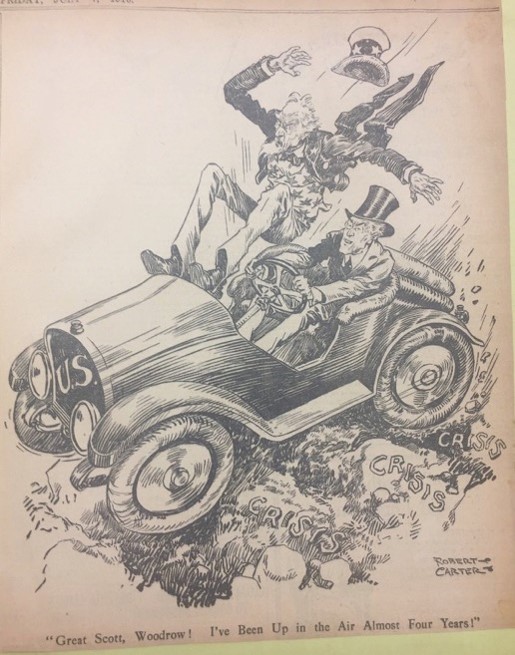 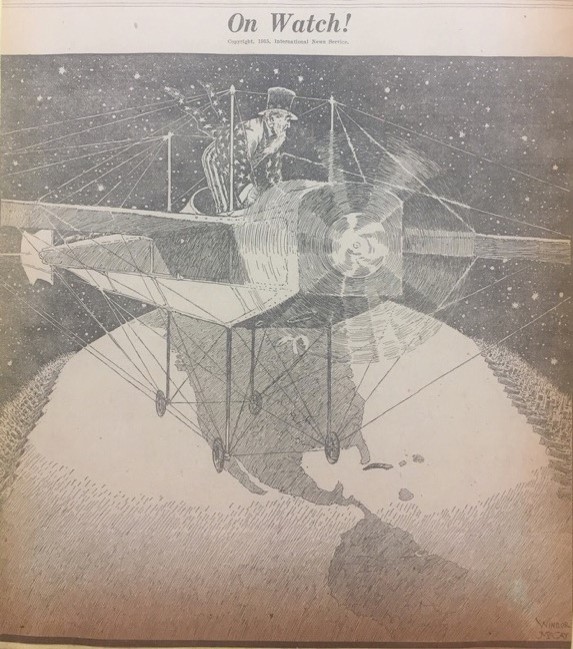 In these cartoons, metaphor is made visible and even literal. One of the fascinating things about newspaper cartoons, of course, is their play with metaphor. William Howard Taft’s steamrolling of Theodore Roosevelt in the 1912 Republican presidential primary, for example, is no mere metaphor in the cartoons. Instead, the way in which our imaginary and vocabulary come to rely on fossil-fuel tropes to name and narrate modernity is made visible on the page. It raises the interesting question of language itself, and what phrases and expressions may, one hopes, become nonsense to a future generation, if we transition away from non-renewable energy sources. 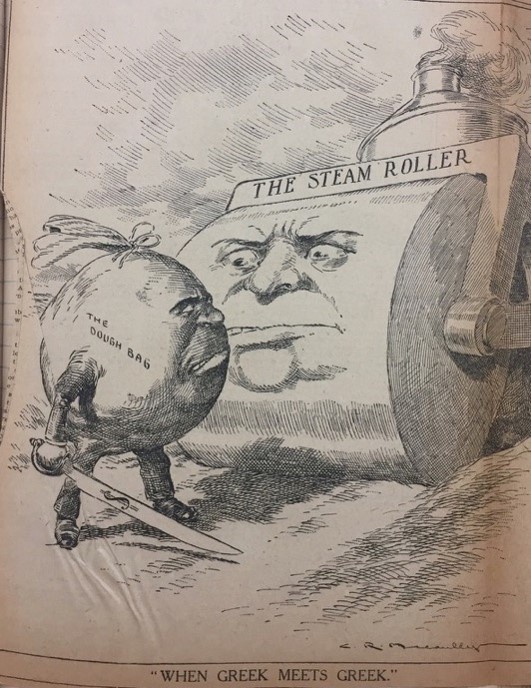 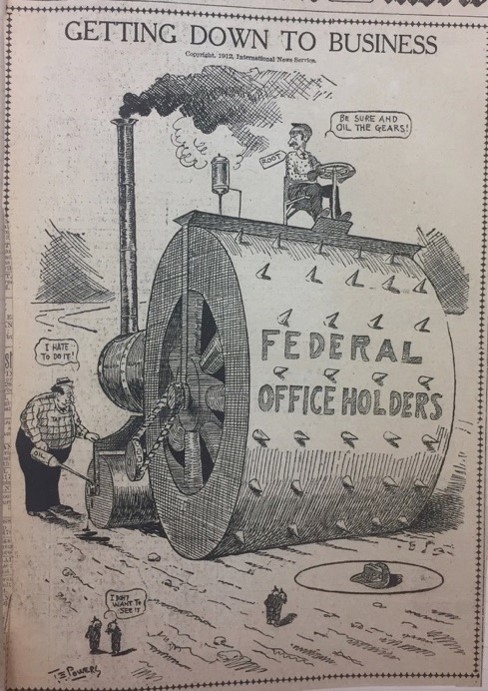 Thomas Powers, “Getting Down to Business”

The automobile would feature prominently in newspaper comics—long-running strips like Gasoline Alley were initially premised on automobile antics. In an amazing Fontaine Fox cartoon, for example, body and car become one. Tomboy Taylor stands on the family’s running automobile, letting the car’s vibrations assist her in dancing the “shimmy.” It is commonplace now for us to think of cars as extensions of our bodies and our personalities—so many car narratives, from Hanna Barbera’s Wacky Races to the Fast and the Furious film franchise, have relied on the equation of character with car—yet here in this single panel cartoon, we see the automobile no just as an extension of the body, but as a way of remaking the body. The car gives Tomboy Taylor a new way of moving, one that, as her brother remarks in the comics’ joke, she wouldn’t be able to do by herself. Even the seemingly metabolic act of dancing becomes powered by petroleum here. 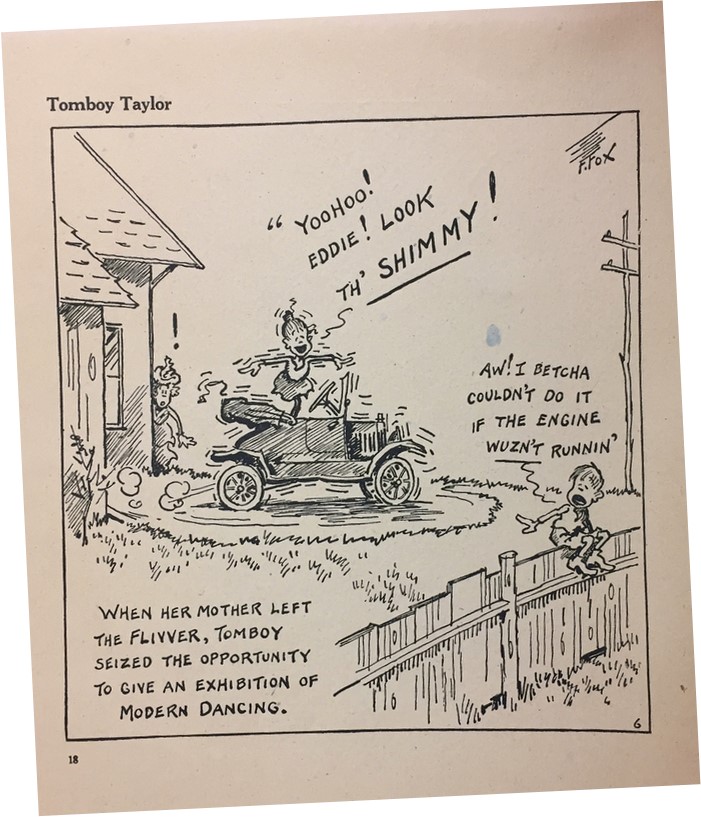 And even in comics that don’t feature automobiles, the kinetic power of fossil fuels seems to direct the narrative. In a daily newspaper strip, “The Gumps,” for example, the husband Andrew tries to light the stove. When he finally gets it lit, the gas ignites powerfully, blowing him out of the panel. In the final panel of the strip, Andrew is surrounded by smoke and clutter, exclaiming “Oh Min!” This familiar four-panel sequencing—two panels of build up, one panel of action, and a final closing joke—depicts natural gas combustion as funny, of course, but also as destructive. It blows the human out of the panel, forcing his body to move at an inhuman speed. Yet, the strip’s final panel reassures us, we live with this kinetic possibility.

In her classic essay “Grids,” Rosalind Krauss notes that the “grid” functions etiologically and not historically in art. That is, once the grid becomes an essential part of modernist painting, it doesn’t develop – it just remains part of modern art’s basic visual structure. While Krauss doesn’t entertain the possibility that comics, like modernist art, use the grid as an essential structure, I nonetheless think her claim applies not just to painting, but also to cartooning. Like the grid, the tropes through which the oil industry is represented in comics – the octopus, the corporation embodied by the individual mogul – and the way automobility is represented in comics – reshaping our bodies and how we move through and narrate space and time – function etiologically, as well. Once these tropes are implanted in the medium, they stay there. The question for us moving forward, then, might be: what kind of a world can comics imagine that moves us beyond fossil fuel-powered notions of self and society?

Dr. Daniel Worden is an Associate Professor in the School of Individualized Study and the Department of English at the Rochester Institute of Technology.