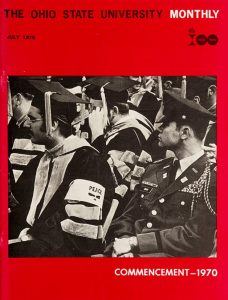 For many OSU students and alumni, 1970 was a year that constantly brought bad news. The Beatles broke up, the Apollo 13 mission to space almost didn’t make it home again, and President Nixon ordered more US troops into Cambodia in yet another attempt to end the Vietnam War. The Cambodian Campaign sparked protests across the nation on college campuses, including Ohio’s Kent State University, where 4 students were shot by the National Guard on May 4th following several days of protests. In the midst of this emotionally charged atmosphere, the Ohio State University started winding up for the university’s centennial celebration. For some, this was a welcome moment of optimism in an otherwise depressing year, as Marjorie Schwartz, Class of ’45, described in a letter to OSU Monthly’s July issue:

“You will note the date of this letter and understand when I say that along with millions of people I am just a bit depressed and dejected about the tone of the times. This week especially with the Kent State incident and the campus action around the country, I am alternately bewildered, angry, fearful, heartsick, etc. – it boggles the mind…

THEN the [Centennial] Monthly arrived. OHIO STATE LIVES! and the world will be all right after all.” 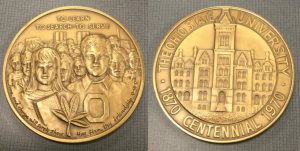 The university wanted this optimism for the future to be evident throughout the Centennial celebration, and asked celebrated cartoonist and OSU graduate, Milton Caniff, to design a commemorative medal that showcased the future of Ohio State – its students. Richard Mall, Director of Alumni Affairs, suggested to Caniff that instead of campus buildings, the medallion might feature young people, the true “product” of OSU. The medal was then used for several award ceremonies during the Centennial celebration to recognize individuals who had made significant contributions to the university, such as Jesse Owens, Milton Caniff himself, and others. Additionally, OSU awarded 24 honorary degrees and 150 centennial scholarships to students, as well as hosting over 250 different events on campus to celebrate the occasion. 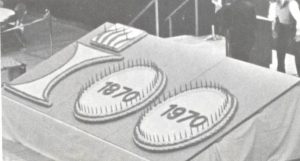 The Centennial logo itself was featured heavily everywhere, including a massive cake that faithfully reproduced the stylized torch in a recipe that called for over two thousand eggs, hundreds of pounds of flour, sugar, butter, and two quarts of vanilla extract. The cake served over 4,000 people at the “Buckeye Centennibration” held at the Ohio Union on January 10th, and the University president, Novice G. Fawcett, crowned the “Centennial Queen”, Christina Lee McClain. Christina, a junior in the Computer Science department, impressed the selection committee with her application, which emphasized the importance of reaching not only the student body and alumni of the University via her position as a University representative, but the larger communities of Columbus and Ohio. Ohio also celebrated the auspicious year statewide by designing and issuing almost six and a half million license plates that featured the iconic shades of scarlet and gray. 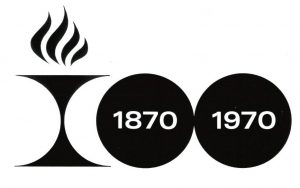 Despite the numerous celebrations planned for the centennial year, university leaders such as President Fawcett were concerned with not only the immediate future, but the distant one as well. In a published list of objectives for the next hundred years, 1970-2070, the university stated that its focus must be “to identify major problem areas that make the next century a critical one – problems that must be solved in this century if the viability of civilization is to continue”. Milton Caniff captured this mixture of hope and uncertainty that encapsulated the start of the seventies in a program handed out during OSU’s Centennial Ball, which included a poem he’d written in 1930 as a senior at OSU:

“No class before or since gives hoot that mine marched out to panic’s tune. Depression changed our lives, but talk about it bores, so let it pass away. Important is the fact that Orton’s chimes reached every student ear.”

Though half a century has already passed since OSU’s 100th birthday, the university’s aspirations for a better future remain unchanged, and even in the face of a constantly changing future Buckeyes refuse to settle for simply solving today’s problems. Just as our predecessors did fifty years ago, we look towards a better future: one with OSU’s students at the helm, inspiring a better tomorrow.

OSU’s Centennial had hundreds of events throughout 1970, but these were the highlights, focused largely on Spring Quarter:

March 20-22 – Charter Weekend, the highlight of the year’s many celebrations

Throughout the year – A traveling exhibit of OSU’s history was displayed in over 50 places across the State of Ohio, highlighting the studies of the university’s freshmen and sophomores.