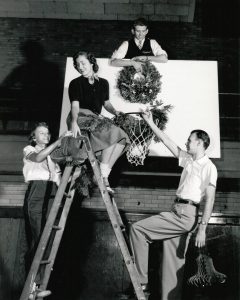 When Barbara Gibbs started at The Ohio State University’s College of Commerce in 1952, she was captured in a chance photograph of the decorating committee for the White Christmas Celebration in action. The photo was later published in a newsletter for parents of OSU students, invoking an idyllic, almost Norman Rockwell-esque snapshot of 1950’s America. In it, Ed Alford, Chairman of the Decorations Committee, is hanging a wreath on the basketball hoop as three other students assist him: Jim Allen, Carol Smith, and Barbara Gibbs. Yet Alford isn’t the focus of this photo – the photographer instead chose Gibbs, with her jauntily cocked neck scarf, coveted saddle shoes, and immaculately waved hair. She was the perfect visual centerpiece for a photo of collegiate life at OSU, but a mere freshman who’d barely been on campus long enough to join a committee, let alone run one.

Gibbs was going to change that, and she lost no time in starting. In 1952, the only record of her passage on campus was that single photograph of her perched atop a ladder. By the time she graduated in 1956, The Lantern had mentioned her by name over 100 times and she ran for student government, tackling issues like discrimination and mental health in an era when many people still refused to acknowledge them. She was in the women’s class honoraries of Mirrors, Chimes, and Mortar Board, regularly appeared on the honor roll with a 4.0 GPA, and yet still found time to volunteer for political causes and participate in sororities like Delta Delta Delta and Phi Chi Theta. She loved the arts, swimming, and playing bridge, and was involved with the Buckeye Political Party, an organization that dominated campus government from 1953 to 1967. She was also an active member of the College Commerce Council, becoming its secretary during her junior year, and served as the Junior Class Representative for the Women’s Self-Governing Association. 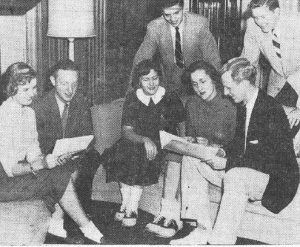 Gibbs, however, wasn’t merely interested in racking up accolades while at Ohio State. She had vision, and while she served on the Student Senate as a freshmen, then a sophomore class secretary, it became apparent that things needed to change. The current Senate was seen mostly as an “activities” committee rather than an actual government, and some students were unhappy with them. There had been concerns about campaigning violations, unattended ballot boxes, and an unclear recount of the votes for the Senate President during the prior year’s elections, and some students felt that the student government made rules, but didn’t follow them. In the midst of this distrust, Gibbs was promoted from the masses of underclassmen secretaries to serve as the main secretary and office manager of the Senate during her Junior year. Gibbs was only the sixth woman to hold this appointment, which had been held by men for the last eight years. When The Lantern interviewed “BG”, as many knew her, about the new promotion, she was amused at the line of the questioning reporter, Ellen Goodman, posed to her. “No, we will not have calico typewriter covers! Our office will be run as an office, and femininity won’t be brought into the picture,” she replied.

Eight months later, The Lantern published a complimentary follow-up piece that noted she had kept her promises, with no “frills” evident in the Student Senate offices. Gibbs explained that the changes she had made to the regular tasks and filing system “have only been effected to improve the efficiency of the office”. Despite the relatively positive tone of the article as a whole however, The Lantern remained optimistically skeptical of her capabilities, describing her as a “woman who has her work cut out for her” and asking her if she’d had any difficulty “taking over an office previously held by men”. Gibbs was positive, responding that she had received “a great deal of cooperation from everyone … everyone’s attitude is just wonderful”. Her term as Senate Secretary went so smoothly that in her senior year, she became the 4th female Senate President, and the first since 1947. As one of her first duties in office, she attended the National Student Association’s Student Body President’s Conference, where she was ultimately elected as the National President of the Big Ten Universities. 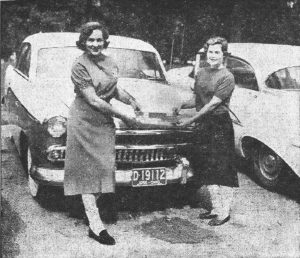 In a meeting held on September 30th, 1954, Gibbs addressed the student body in her inaugural speech, stating that the Senate “must become more than an activities committee” and urging her Senators to examine more national, pressing issues such as the welfare of students and discriminatory practices within campus legislation. When a new state tax was proposed on cigarettes to fund a $150,000,000 health bond that would benefit mental health and welfare institutions, Gibbs organized the Senate to rally the support of the student body. She enlisted the help of the Council of Fraternity Presidents and personally helped placed bumper stickers supporting the tax on over 12,000 cars during the Ohio State vs. Illinois football game later that month. In the meantime, Gibbs had another daunting task ahead her: a resolution to campus legislation that if passed, would “remove all restrictive clauses from the charters, bylaws, and constitutions of all campus organizations”. The idea of removing race and religion as discriminatory factors that might exclude students from joining some organizations had been examined previously in 1954, but no real action had been taken by the exploratory committee.

Gibbs wasn’t satisfied. Previously, the resolution had merely been aimed at eliminating race and religious discrimination from private campus clubs, Greek houses, and other organizations at OSU. That was a start, but the new Senate President felt that they needed to take a serious examination of the campus culture as a whole. Instead of merely addressing social clubs and Greek Life, Gibbs wanted the committee to examine and eliminate discrimination from all facets of campus life, including scholarships, housing, student employment, admissions, student teacher training, health and recreational facilities, and physical education. The scope was simultaneously impressive and intimidating, and The Lantern noted that this could either be a new era of effectiveness by the Student Senate or risk bogging down the entire process by widening the resolution so broadly. The end result seems to have been a bit of both, with a January 21st, 1969 article in The Lantern mentioning that the actual outcome of the referendum was never reported on, but had evidently passed, since campus organizations were no longer recognized by the University unless they had non-discriminatory practices clearly established. Unfortunately, the larger aspirations of the referendum remained unresolved, with issues like minority housing and discrimination within the wider campus culture still remaining problematic into the 1970’s and beyond. However, the anti-discrimination policy for clubs, sororities, and fraternities remains in effect today, over 65 years later.

Ultimately, Gibbs called the progress of the Senate discrimination resolution “one of the most important things the Senate has done”. The Lantern agreed with her, noting that while the problems within 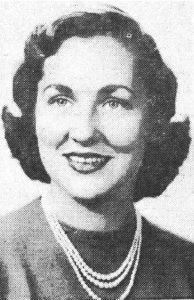 the Senate couldn’t be fixed in only a year, “the pendulum was swinging towards progress”. Barbara Gibbs – now Doster after her marriage in 1956 – was leaving behind a Senate that was looking forward and starting to truly consider the responsibilities they faced as elected student body representatives. Gibbs remarked in her farewell address that she was satisfied with the visible progress that had been made in the last year, and joked that she regretted that she had left “no frills, curtains, or anything feminine” to mark her term as President. Rather than urging future Senators to follow in the footsteps of her administration blindly, she encouraged them to “originate and make decisions on basic issues rather than carry on what someone else has contrived”.

As The Ohio State University looks back over its century and a half of students, innovations, and progress, arguably the most important thing the University has achieved has been to offer the opportunity for an education to all students, regardless of background, ethnicity, religion, or gender. In this regard, Barbara L. Gibbs was ahead of her time, and an example for future student governments.