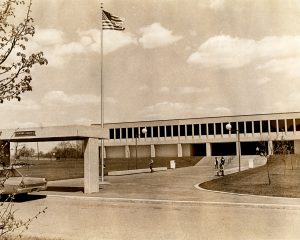 Continuing our series on the regional campuses, we now head west to The Ohio State University at Newark. Newark was established alongside Marion in 1957, and it operated in much the same manner in its first decade. The campus’s first classes occurred at Newark High School in the evenings and consisted of 80 students and 8 faculty members. Classes continued to take place in Newark High School until early January of 1969, when its first building, Founders’ Hall, was dedicated.

The campus remained primarily a commuter campus until 1984, when Newark approved the construction of two residence halls which would allow students of the branch to live on campus. Alongside this construction project, while trying to clear new land for an accompanying parking lot, the construction company uncovered several archaeological sites dating back to the Middle Woodland period—about 1,400-2,000 years ago. In 2006, the Newark Earthworks Center was established to conduct research and increase the understanding of “American Indian cultures that produced the monumental Midwestern earthen architecture in order to advance understanding of the cultural and scientific achievements of American Indians to the world.”[1] 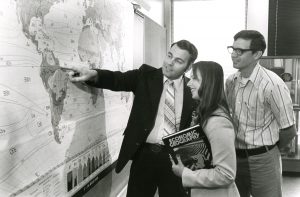 Nowadays, the Newark campus has 11 buildings, which include two residence halls and a recreation center, and it offers six complete Bachelor’s degree programs as well as two Master’s programs in Social Work and Teaching and Learning.

Fun fact: in May 1990, Newark hosted “Clown Town ‘90” which was a three-day convention targeted toward both beginning and experienced clowns that offered seminars and instructional workshops on a range of topics from make-up techniques to balloon making.