It was not always a given that Ohio State would be in Columbus. It’s thanks to the efforts of a few members of OSU’s first Board of Trustees that the campus sits along the banks of the Olentangy River.

At the first meeting of the Board of Trustees on May 11, 1870, the members of the Board presented several different qualities that would be present in the ideal campus location. One member said 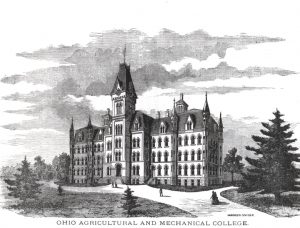 that because the school should be academically-oriented, it should be located in a more rural area rather than a city. Another stipulated that, as OSU started off as an agriculture school, it should be built upon a farm of at least 320 acres. Yet another offered that he didn’t think the location should be the most important consideration, but that their choice should be controlled by the amount of the proposed donation. Eventually, they concluded that they would accept bids for the location of the university through the first of September, 1870, and after that, they would begin touring locations.

In early September, 1870, the Board had four main candidates for the location of the university: Clarke county, Champaign county, Franklin county, and Montgomery county. Over the first few weeks of the month, they traveled to each location and toured the proposed properties to determine which was the most suitable for the school. Upon their return, a representative from each of the four counties presented their respective case to the board. 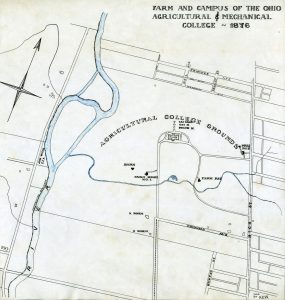 After this presentation, on September 21, 1870, the Board balloted on the proposed locations. Champaign county was dropped first, followed by Montgomery, and finally Clarke, leaving, of course, Franklin county as the winner. The Board followed this vote by resolving that they would stand by this decision if they could find a suitable farm and be guaranteed a $300,000 donation by Franklin county.

In October of the same year, several potential farms were presented to the Board, and after another round of balloting, they decided on the Neil farm, located in Franklin county near the Olentangy River. The campus and the city would continue to grow, eventually overlapping borders thus making the Ohio State and Columbus synonymous.