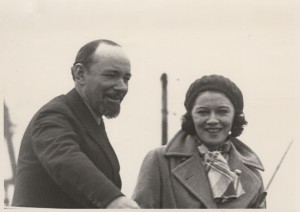 In June of 1930, the famous explorer Hubert Wilkins, accompanied by Sloan Danenhower found themselves sorting through a Navy scrapyard, examining submarines for a trip under the North Pole. The Navy had given Wilkins his pick of the scrapyard, with the chosen submarine to be leased for only one dollar. The submarine in the best condition was O-13, which also held the record for the deepest dive. The pair, however, were spooked by the number 13, so “letting superstition overcome logic, they settled on the O-12.”[i] Unfortunately, the O-12 would prove as unlucky as they feared 13 would be. 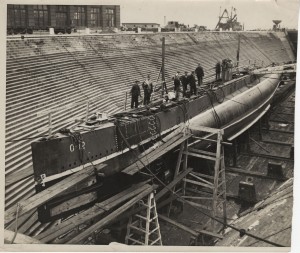 The Nautilus being outfitted in a dry dock.

Wilkins proposed a trip into one of the last uncharted places on Earth. He planned to travel by submarine underneath the North Pole from Norway to Alaska. The expedition would be called the Wilkins-Ellsworth Trans-Artic Submarine Expedition. Such a journey was fraught with risks. The Arctic holds no land beneath the ice and is composed of shifting ice floes which occasionally collide and shoot spikes into the ocean. Worse, everything that sailors usually rely on to navigate —the deep basin, the currents, the thickness of the ice, the temperature, 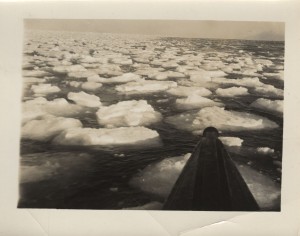 Image of Arctic waters, taken from the deck of
the Nautilus.

its interaction with other oceans—was uncharted in 1930. For Wilkins this was part of the attraction; the ability to aid science, to learn about weather and “to fill in the last unknown on the map”[ii] drove his ambition and excitement for the journey.Navigation in the uncharted Arctic was not Wilkins’ only obstacle, however. The O-12 itself, rechristened the Nautilus (with ice, as champagne was still illegal), proved to be one of the greatest challenges. The O-class submarines were built for coastal waters, not the Arctic or even, as Wilkins would discover, the open ocean. This meant that the submarine would have to surface every day to recharge its batteries and gain fresh air in a stretch of ocean that was uncharted and plagued with constantly shifting ice floes. If the submarine was unable to find a safe place to surface, the crew only had three days of emergency air before they would suffocate (partially explaining the trip’s nickname of “the suicide club”). These issues were compounded by the number of modifications necessary for the Nautilus, including fixing the engines, finding and caulking all leaks and preparing it for scientific experiments. 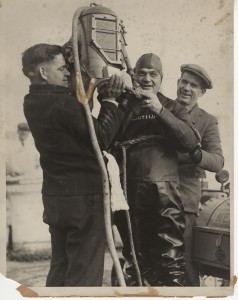 In spite of these problems, the newspapers hailed the expedition as ‘The Greatest Adventure in History.’ 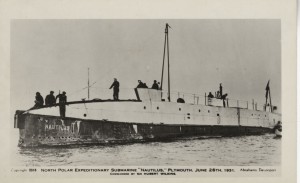 Postcard of the Nautilus.

A flood of individuals applied to join the crew, children gave pennies to help fund the project, and there was a scheduled rendezvous with the Graf Zeppelin when the Nautilus resurfaced in the Pacific.  The trip itself, however, was not to fulfill the expectations of its newspaper headlines.

Tragedy befell the expedition even before the submarine departed the U.S. While entering New York, Willard Grimmer, the quartermaster, was swept overboard by battering waves and drowned. 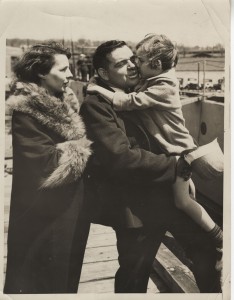 Ray Meyers, Chief Radioman aboard the
Nautilus, saying goodbye to his wife
and daughter.

This unfortunate accident was not the only disaster, either. During its first deep sea dive, the Nautilus sank and got stuck in the mud at the bottom of Long Island Sound. Though the submarine eventually dislodged itself, this was not the last time that the crew faced death within the Nautilus. Even with these grim events, the Nautilus set out across the Atlantic toward its destiny in the Arctic.