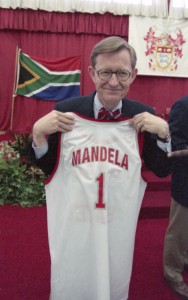 President Gordon Gee holds a Mandela jersey during his trip to South Africa, 1996

In early June 1996, President E. Gordon Gee, along with 36 Ohio State faculty members and the OSU men’s basketball team, embarked on a two-week trip to South Africa, with the faculty going on to visit Uganda as the basketball team took a detour to Zimbabwe. The timing of the trip was particularly significant: Only two years earlier, South Africa’s apartheid system had been brought down by free elections following violent protests.

The primary purpose of the tour was to foster ties between Ohio State and African universities and to show how Ohio State can make a difference around the globe. One major area of shared interest: agriculture. For years South African students had come to Ohio State to study agriculture before bringing these lessons back to their home country. Some of these students had gone on to become faculty members at the University of Natal in South Africa. Makerere University in Uganda, likewise, had a strong relationship with Ohio State; OSU worked with the Ugandan university to set up a Cooperative Extension Service in Uganda, with the aid of $20 million from the World Bank. In addition to furthering the agricultural relationship, faculty members hoped the 1996 trip would help build collaboration in law, education, nursing and humanities programs with South African universities. 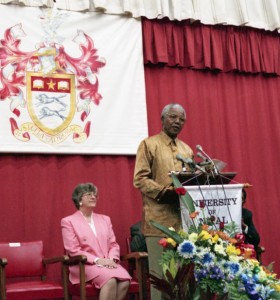 Meanwhile, the men’s basketball team hosted basketball clinics and demonstrations for local residents, both in the major cities and in the countryside. Basketball was seen as a way to bring people across South Africa together and integrate traditionally rugby-playing whites and soccer-playing blacks. At the same time, OSU basketball players learned about the history of modern South Africa and the role that students played in the protests that eventually brought an end to the apartheid regime. At one point, basketball team members attended a Youth Day celebration where they heard then-South Africa President Nelson Mandela speak.

The members of the OSU delegation were thrilled by the success of the trip, Gee said after the return. “We really met and exceeded our expectations,” he said. Gee and others spoke positively of South Africa as a nation, remarking on its determination to become a diverse, integrated country and its optimism and hope for the future. The Ohio State visit also was apparently the first visit by a foreign university’s representatives to the South African countryside. 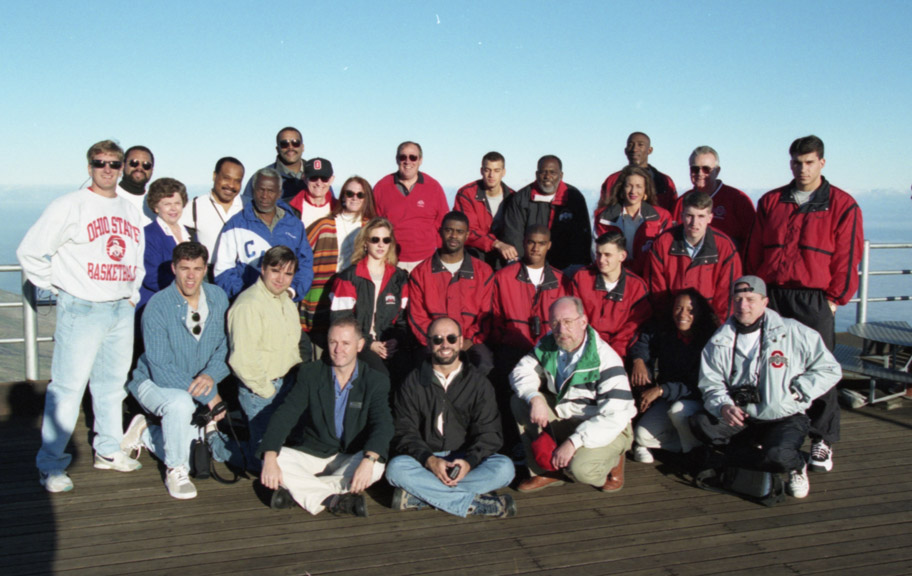 Members of the trip, including athletes from the basketball team, pose for a portrait, 1996