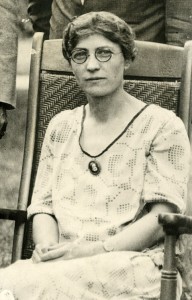 It was 90 years ago today that the first woman was named to Ohio State’s Board of Trustees. Alma W. Paterson was a member of Ohio State’s class of 1904; as an undergraduate, Paterson had been a member of the Browning Dramatic Society and studied science and physical education. She received her bachelor of arts degree in 1904 and went on to serve as an assistant director of physical education for women for three years. In 1910, she married Robert G. Paterson, a 1905 OSU graduate, who was then executive secretary of the Ohio Public Health Association.

Alma Paterson was appointed to the Board on March 27, 1924, to succeed the late OSU Prof. Thomas Mendenhall. Then-Ohio Gov. A. Victor Donahey had already indicated that the next appointment to the board would be a woman since “the large number of women registered at the University warrants the selection,” according to a Lantern article about her appointment. Paterson was on the board until 1933, serving as vice chairman twice during that time. 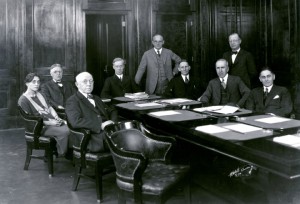 Paterson with the Board of Trustees, 1926

In 1954, the Board of Trustees named Paterson Hall, then a brand-new dorm for women, after her.

Paterson’s daughter, Ann, followed in her mother’s footsteps, first as a student (BS in Education in 1937 and MS in Education in 1939) and then as a professor of women’s physical education. After 19 years of teaching at OSU, she left the University in 1956 to teach at San Francisco State College.