(This is the first entry in a series of profiles of life-long Buckeyes who have had a notable impact on the University, in other words they bleed scarlet and gray.)

When the University’s Board of Trustees decided on Aug. 2, 1911, to hire the University’s first-ever architect, they didn’t have to go far to find him: Joseph Bradford, referred to as the “grand old man of the faculty,” is an example of a life-long buckeye. 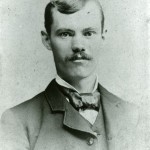 As a student of the University, Bradford was a member of the first marching band (then referred to as a military band). He organized and directed a fife and drum corps for the University’s military training program, which a year later incorporated brass instruments and became the brass band that we have today. He also prepared illustrations for some of President Edward Orton Sr.’s geography research. He graduated from Ohio State with a degree in Mechanical Engineering in 1883.

It is ironic that many of our best teachers never set out to teach: Bradford was a draftsman with the Pennsylvania Railroad when he was asked by the College of Engineering to organize a course in engineering drawing, which he declined as he did not want to be an instructor. Nevertheless, the Board of Trustees named him an instructor in mechanical and freehand drawing in 1885, with a salary of $1,000 a year. Whether he was happy at that moment is unknown, but he took the post. As a member of the faculty, he taught engineering drawing and architecture, and pioneered instruction in photography, with the first course in “picture-making” offered in the United States at OSU in 1890. 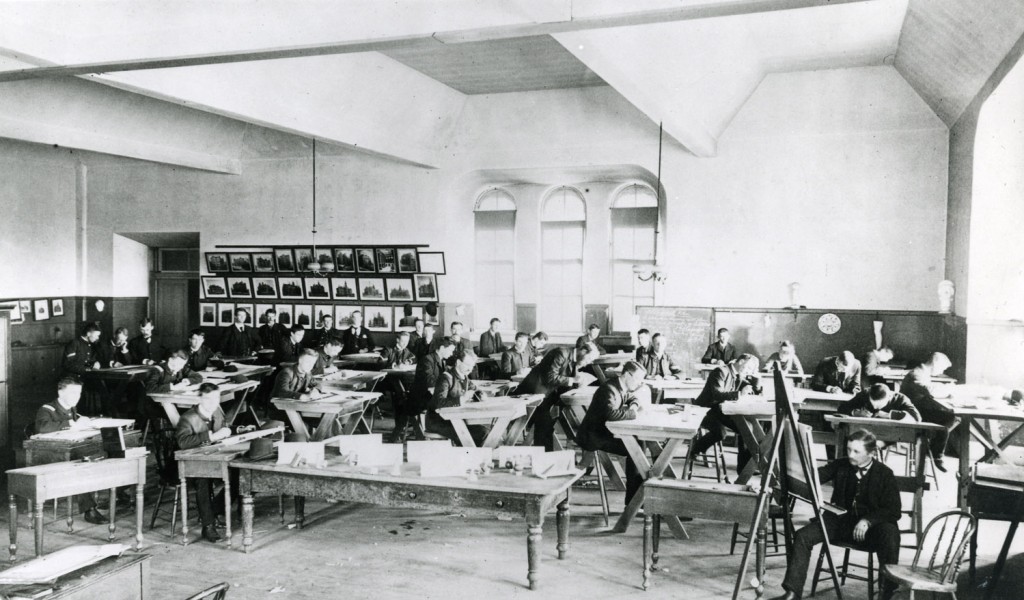 Bradford taught this Engineering Drawing Class in University Hall, 1889 (He appears in the rear left of this photograph.)

Joseph Bradford was named University Architect on Aug. 30, 1911, and he served in that capacity until his retirement in 1929. It is much of his work that we see today as he not only designed many buildings but planned the location of many future buildings he never saw built, with the goal of keeping all of a college’s buildings together. As University Architect, he oversaw the construction of forty new buildings, including Campbell, Derby, Hamilton, Lazenby, Lord, Pomerene, and Mack halls, the McCracken power plant, the Women’s Field House, Starling-Loving Hospital, and the Ohio Stadium. He also created the first accurate map of campus.

At the time of his retirement he had served the University for 48 years; he went on to compile a photographic history of the University and was named a professor emeritus in 1933.  (He also created a collection of hand-colored glass slides from University photographs.  A sampling of the collection has been digitized and can be found on the Photo Archives web site.)  He died in 1944. 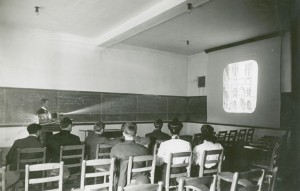 Bradford is shown here teaching a History of Architecture class using the first electrical lantern slide projector at OSU. This class was held in Hayes Hall, 1895 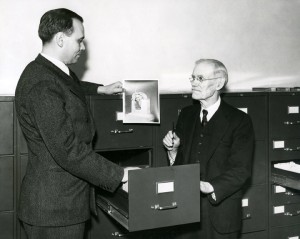