Found in the Collection: Unfinished art by Osamu Tezuka

May 15, 2020 / Caitlin McGurk / Comments Off on Found in the Collection: Unfinished art by Osamu Tezuka 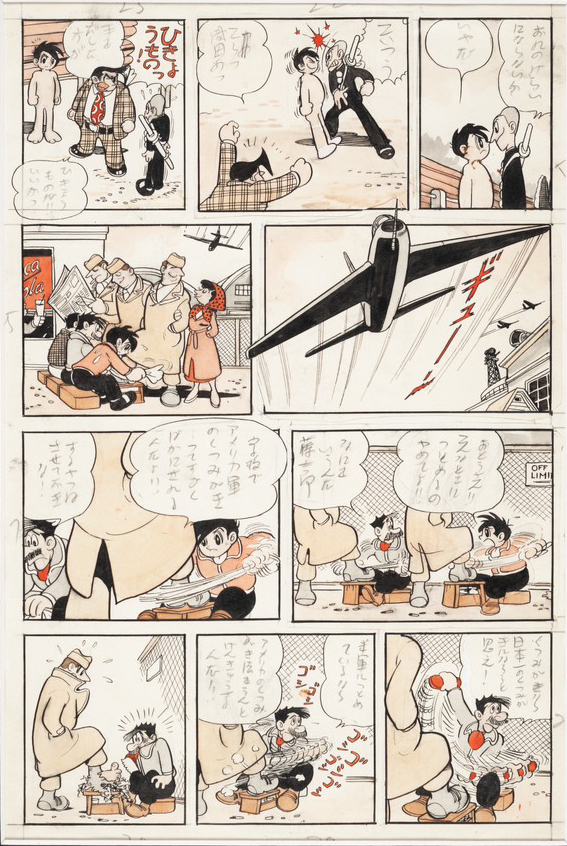 Shown here is an unfinished and most likely unpublished work from the “Godfather of Manga,” Osamu Tezuka (1928-1989). It is a story set during the U.S. Occupation of Japan, and the story behind its purchase is on par with the fascinating narrative of the piece itself.

In 2001, our then-Japanese Language librarian by the name of Maureen Donovan went to Japan in search of materials for an exhibit celebrating Astro Boy, one of Tezuka’s most famous works. Tezuka was a prolific creator; he created over 700 volumes of manga as well as 60 anime programs, so this piece that Maureen Donovan found in a specialty shop called Nakano Shoten in Tokyo is rather special. In an email interview last week, Professor Donovan reminisced that she chose the piece because of its depiction of the U.S. occupation as well as how it demonstrates “Tezuka’s mastery of traditional cartooning techniques.”[1]

In addition to the sound effects I discuss in the video, I can also discuss the dialogue in the piece using translations provided to me by Ann Marie Davis, the current Japanese-language librarian. Tokichiro is our protagonist, and he is being bullied for shining the shoes of U.S. soldiers. The bullying is stopped by the adult who accuses the other young man of being a coward for hitting Tokichiro first. We then transition to outside the U.S. base where Tokichiro is talking to his father and asking him if they could stop shining these shoes because he’s being teased and bullied for it. His father tells him to ignore everyone and focus on being the best shoe-shiner. However, his father is so busy telling him to focus on being the best at his job that he shines away the soldier’s boot.