Few cartoonists can capture the feel of changing seasons quite like Frank King, creator of Gasoline Alley. Known for his innovative panel design, brilliant color palate and the “real-time” aging of his characters, King’s lovingly rendered full-page comics graced the Sunday newspaper from from 1918-1959.  As the leaves change here in Ohio and many of us continue to work from home or attend classes online, BICLM is bringing you a new set of autumnal Zoom backgrounds featuring Walt and Skeezix.

You can click to enlarge and save the images below, or download the files directly here.
Need help changing your Virtual Background in Zoom? Video instructions here. 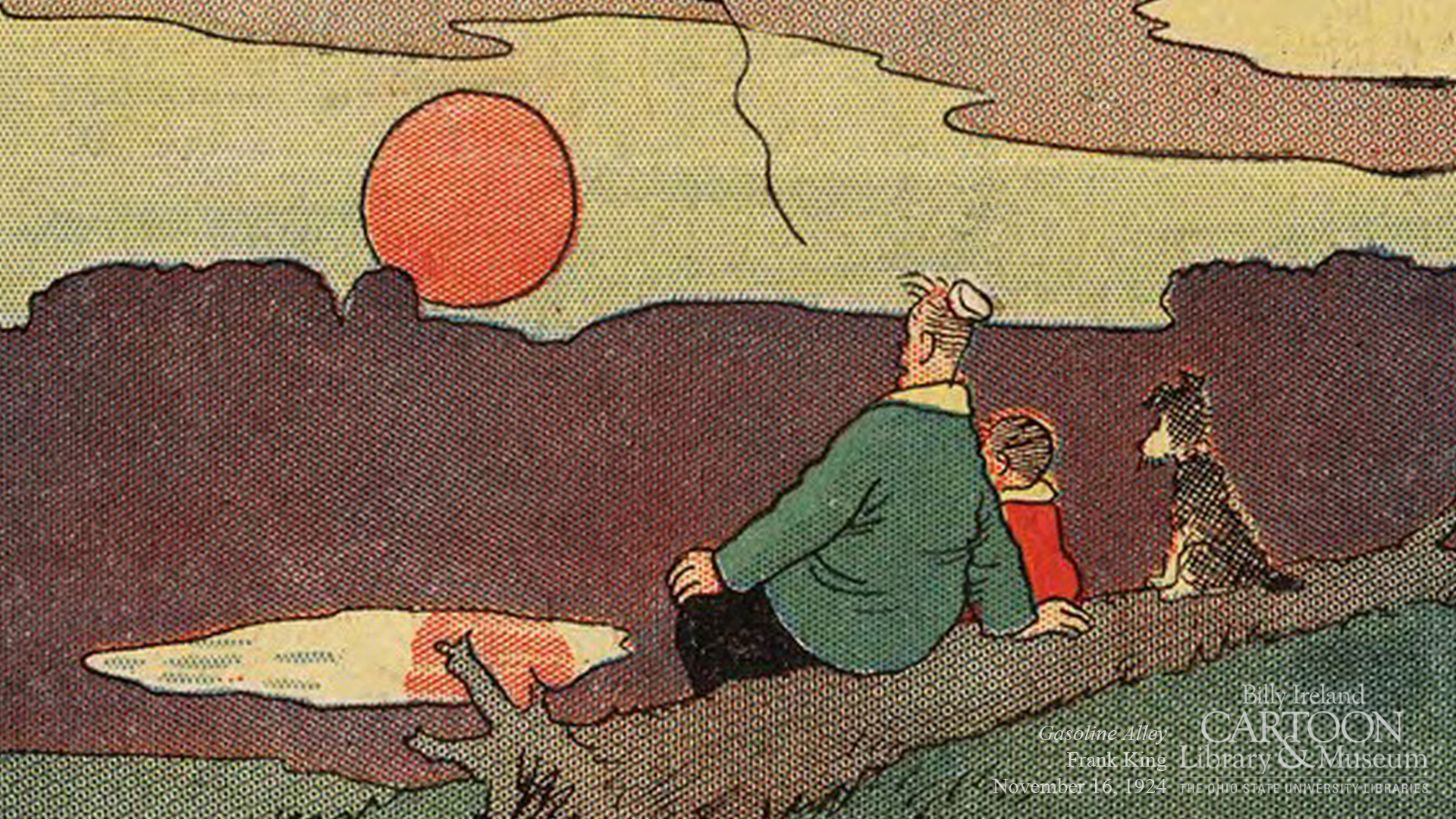 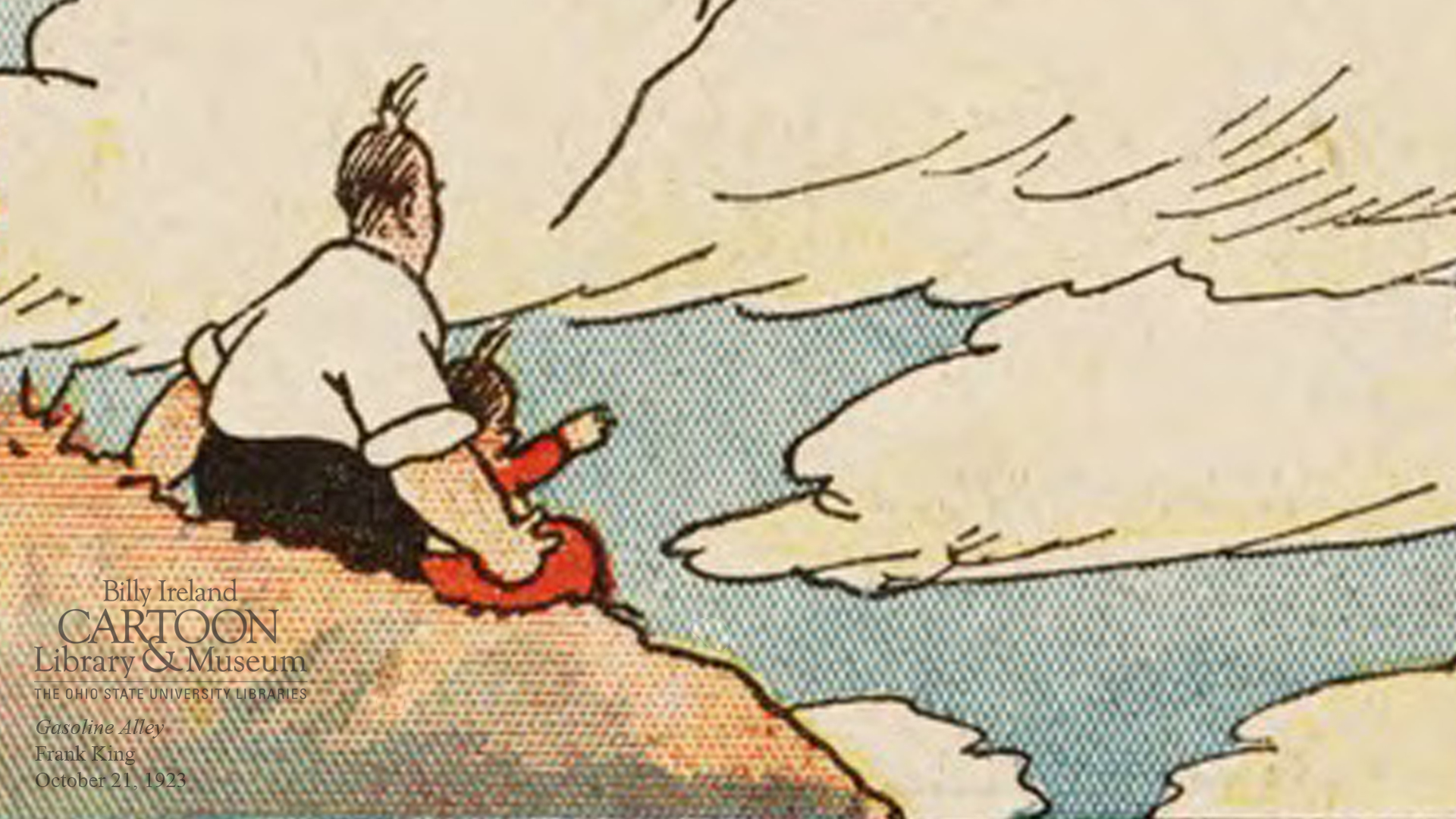 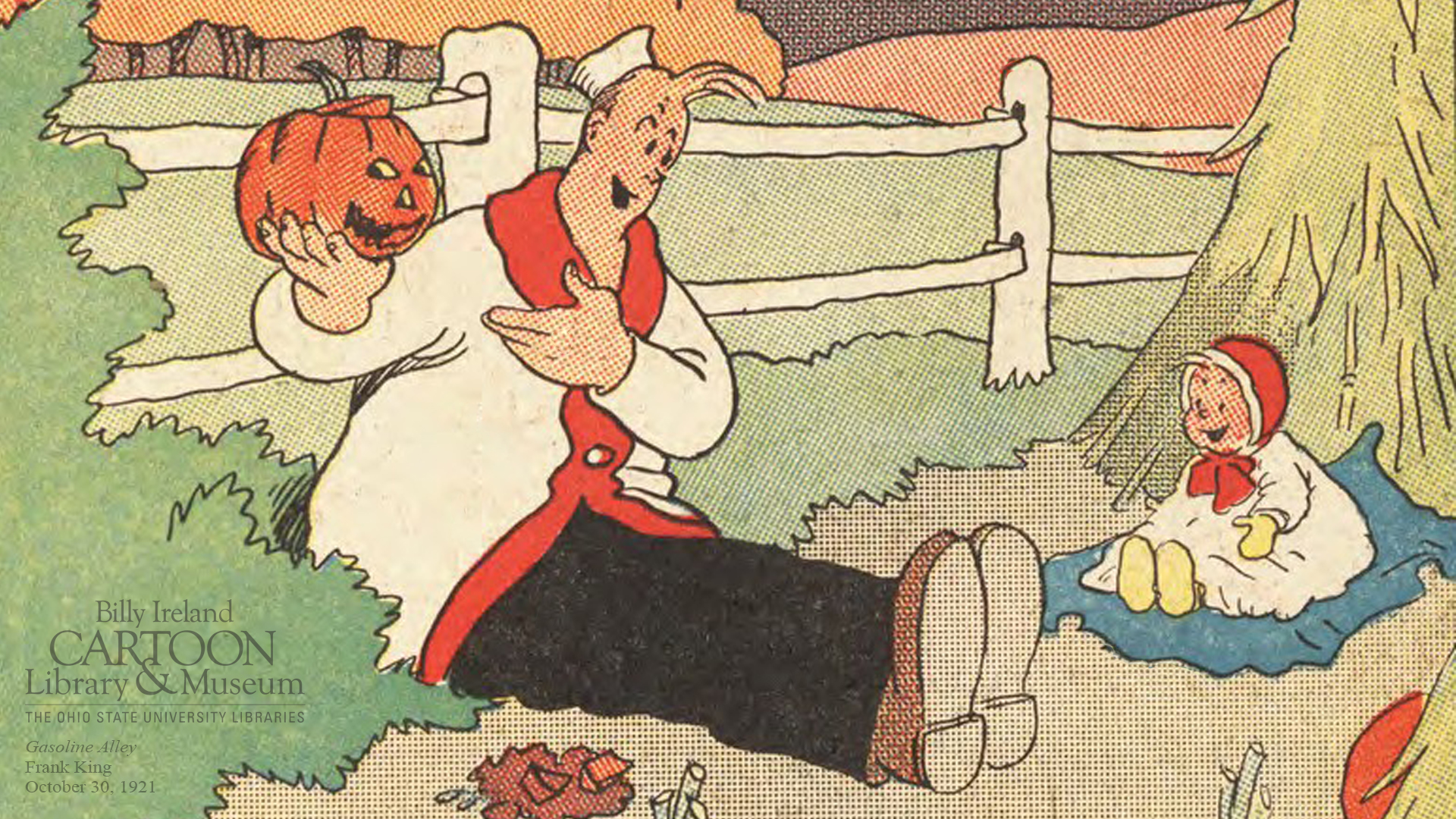 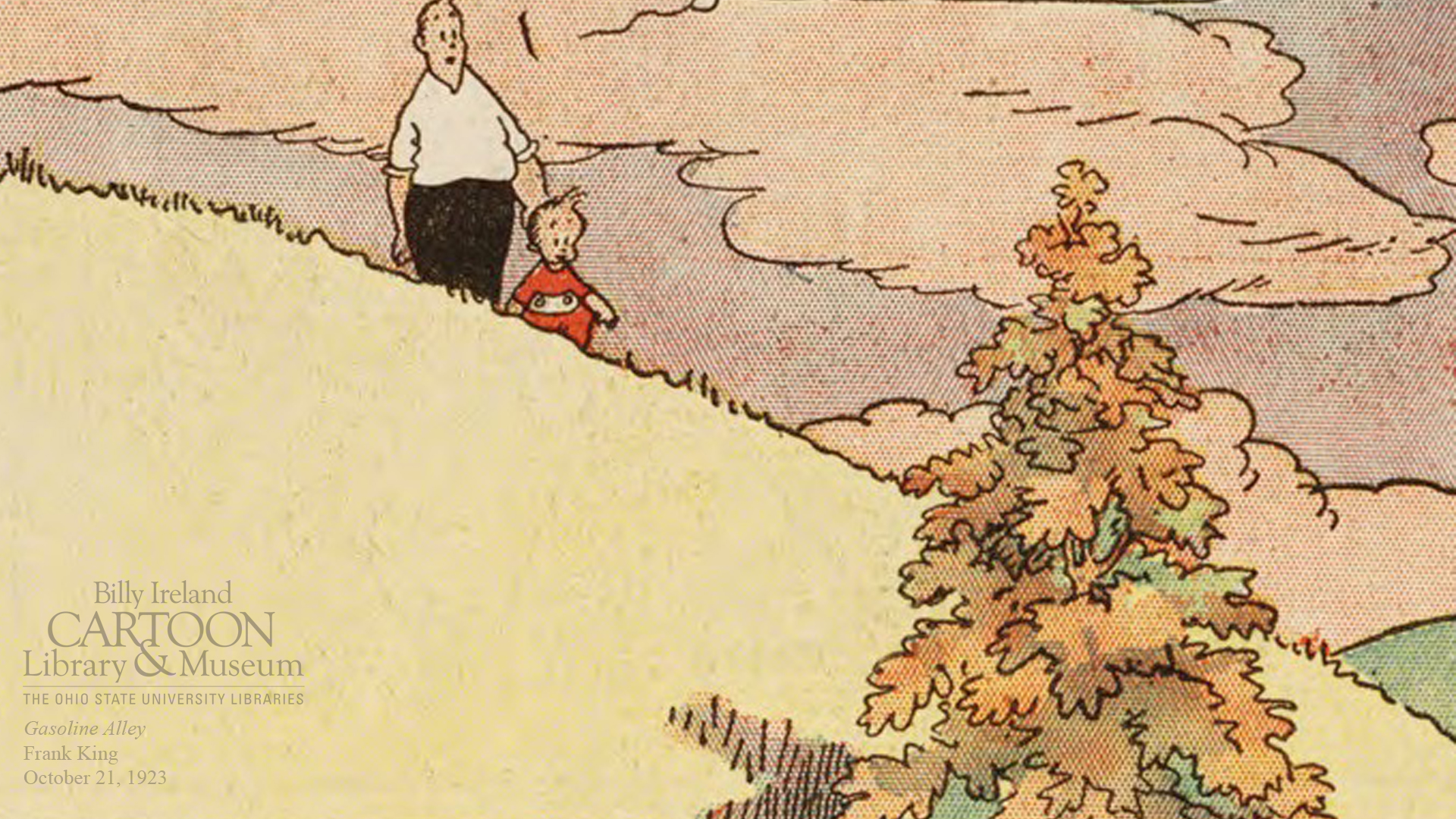 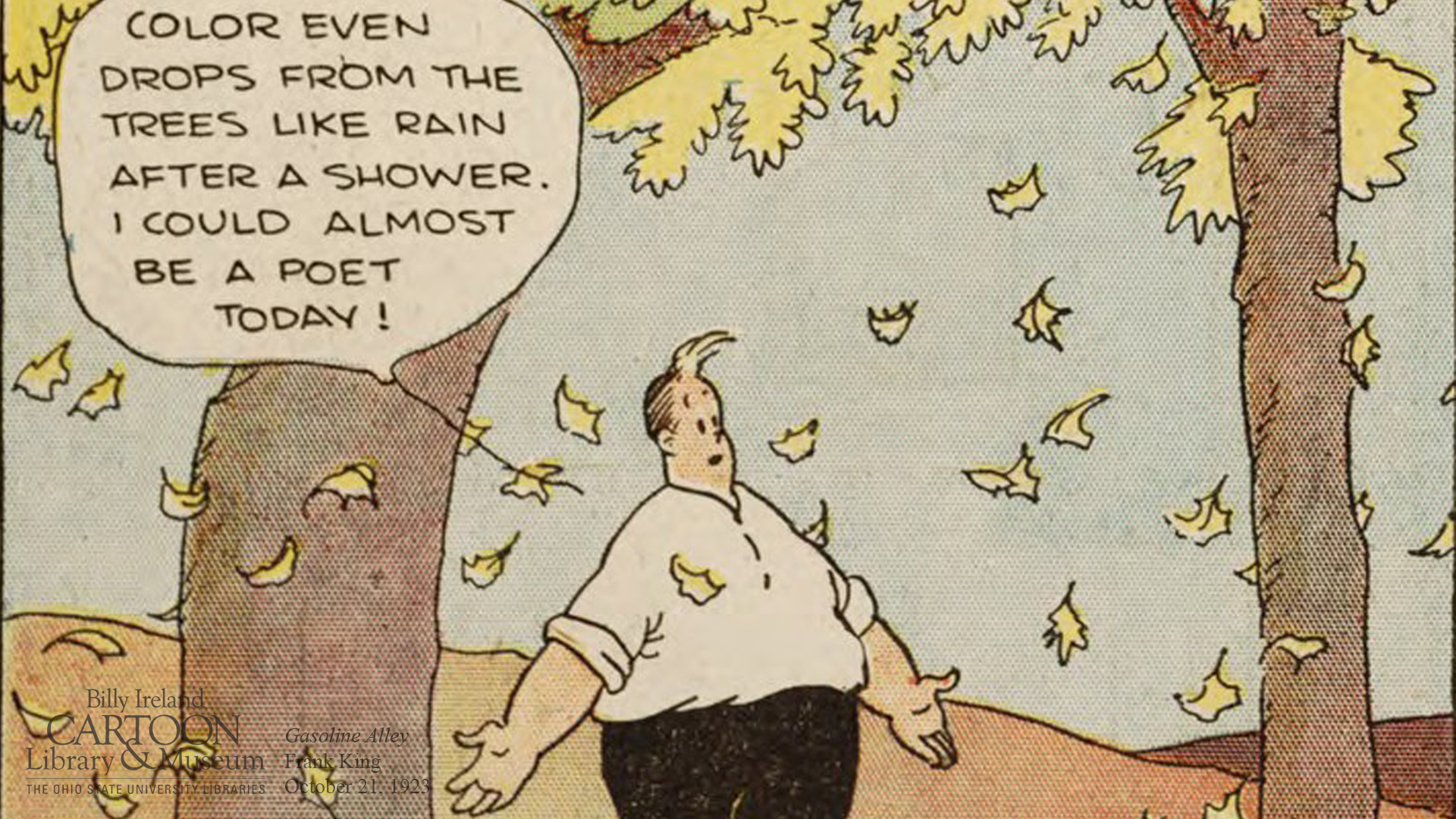 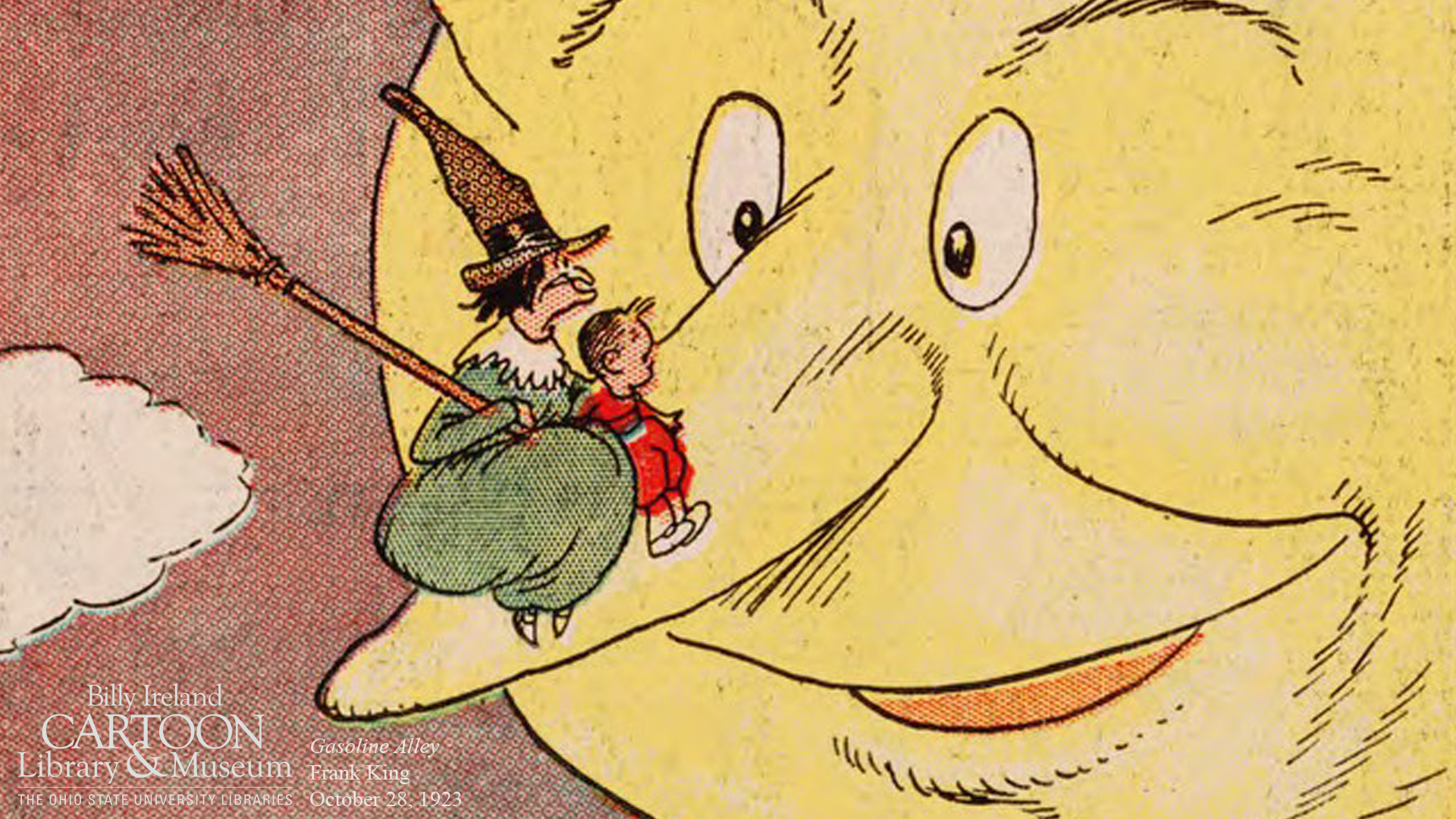 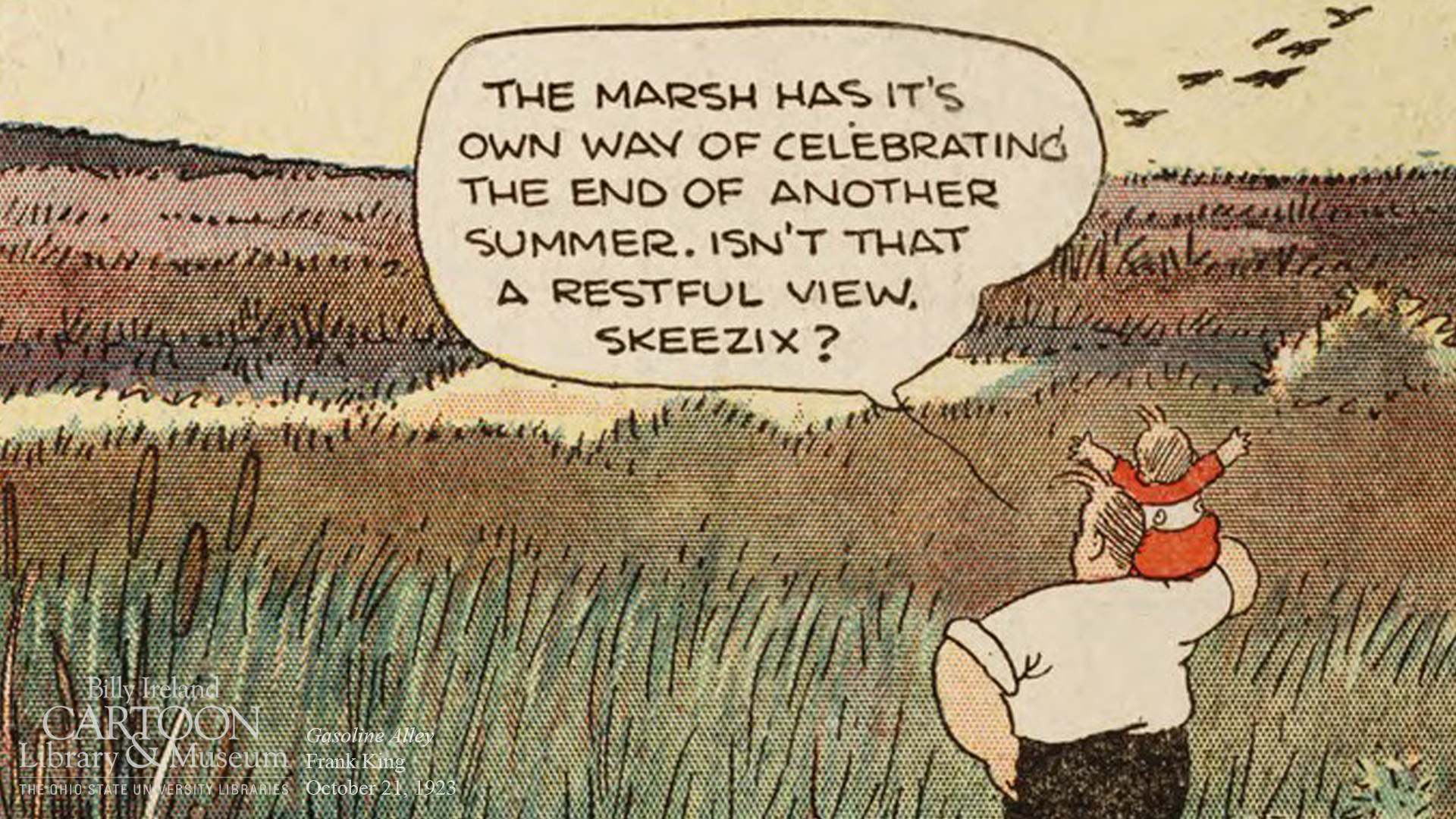 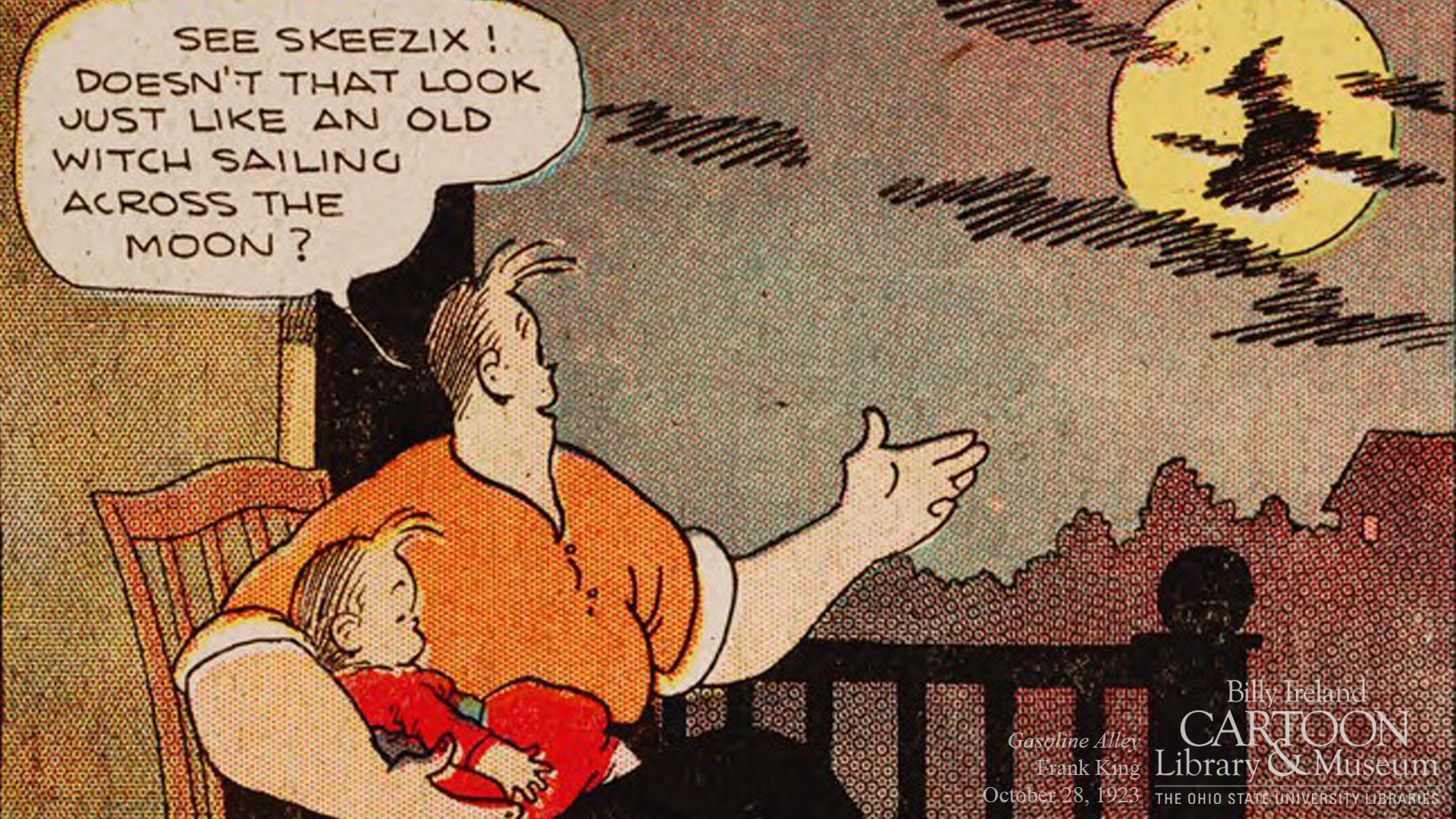 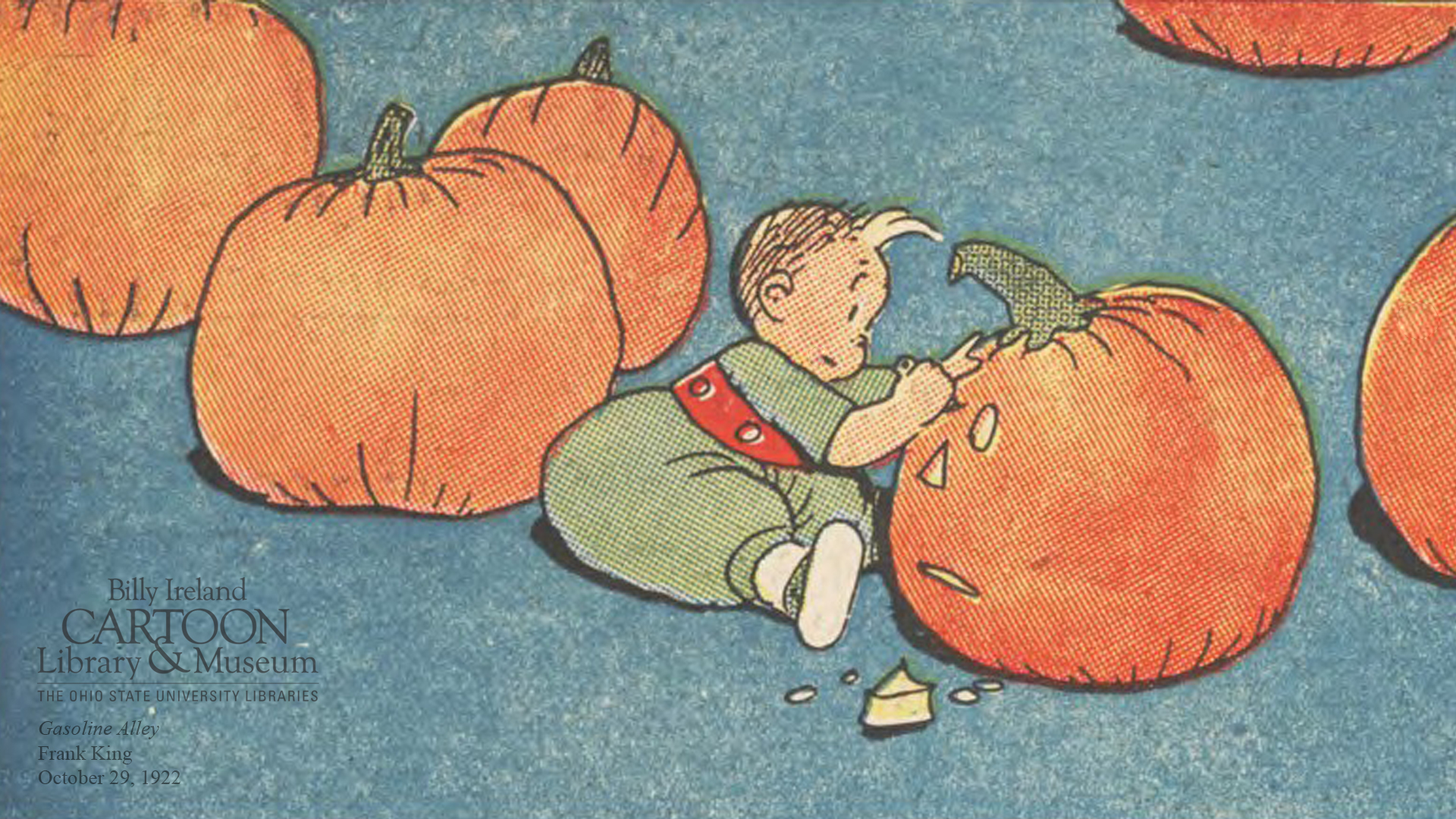 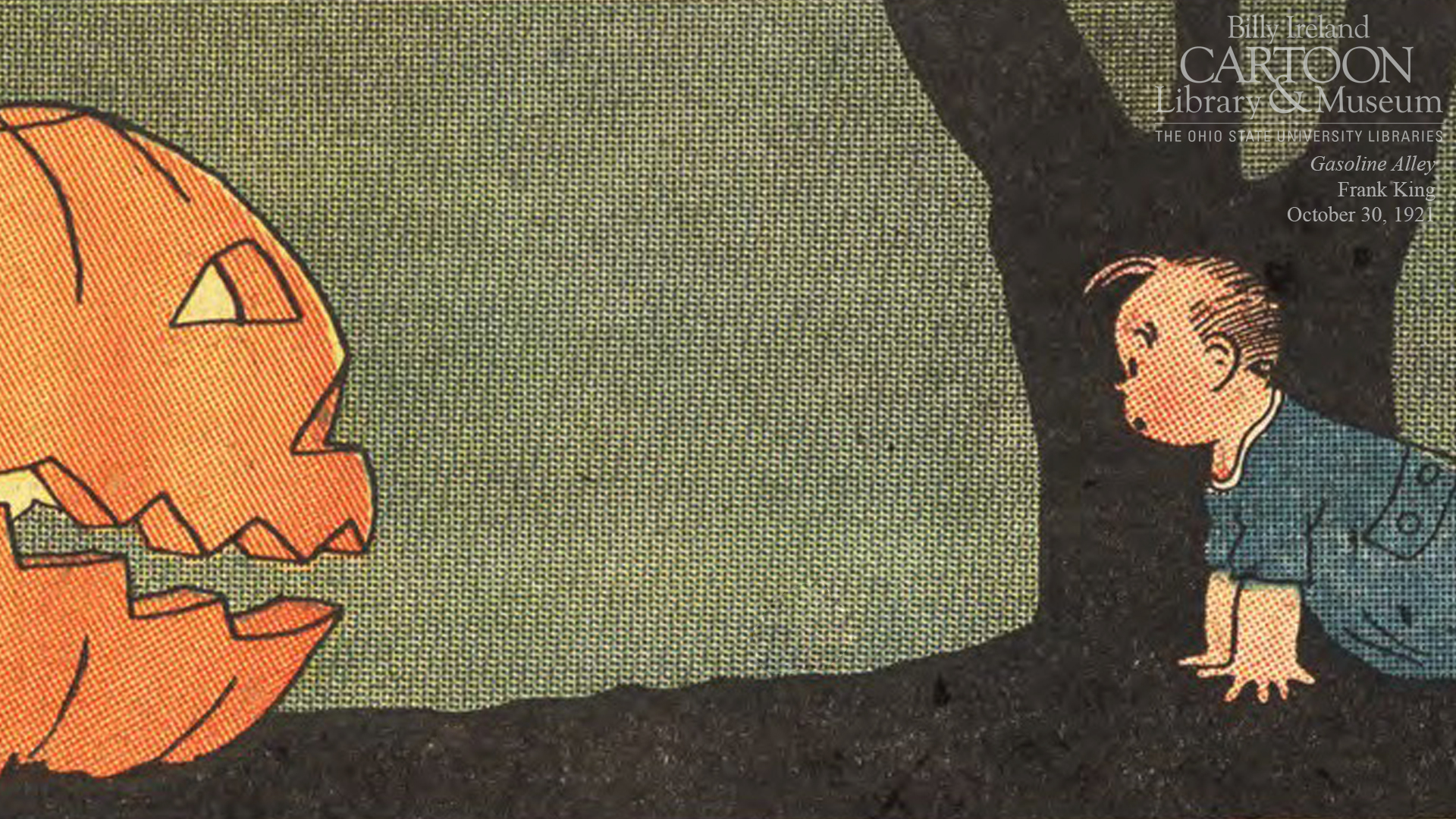 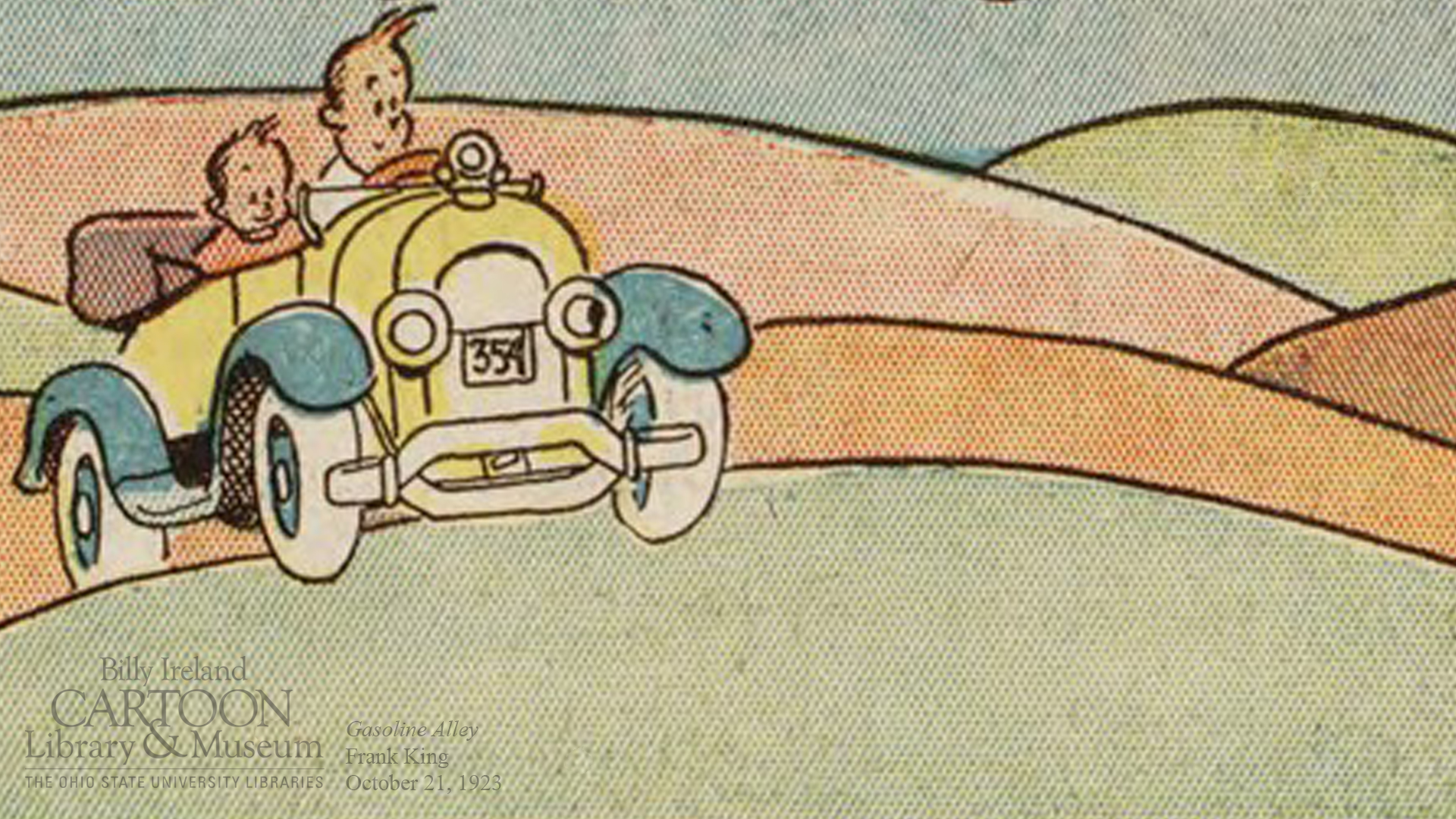 Check out our Little Nemo in Slumberland and Krazy Kat backgrounds, too!

Bio: Izzy DeSantis is a fifth year double major in art history and creative writing who has been at Billy Ireland since 2017.

As a data entry student assistant at Billy Ireland, my job is to create the records you see in our art database. Sometimes, this means I get to do a deep dive into the work of one artist. This was the case with Paul R. Carmack (1895-1977), whose collection of over 1000 political cartoons were generously donated to BICLM by his nieces. These cartoons span his entire career at the Christian Science Monitor in Boston, MA, from the late 1930s to early 1960s. Political cartoons are some of my favorite materials to work with. In order to make a good record for a work, I have to know what is going on in the cartoon, which more often than not means I have to brush up on my historical geopolitics. After three years at Billy Ireland, I’m in the unusual position of knowing most of my 20th century American history through political cartoons.

Like any historical document, political cartoons have a point of view, or bias, that the reader must be aware of. While working with Carmack’s cartoons, I learned that he was a white, Christian man with relatively conservative values, living in Boston. However, I found that Carmack was never fully devoted to either the Democratic or Republican party. He stuck to his own set of values and political convictions, which I, from the 21st century vantage of polarized American politics, found rather admirable. While Carmack’s identity and political values may not quite align with my own, I appreciated how he recorded historical events without pretending to have a neutral stance. In a sense, I think this gave me more freedom to picture and judge the historical events for myself.

Carmack, like most political cartoonists, covered the current events of his day. Some of these events were local to Boston or the Christian Science Monitor readership (the Red Sox’s appearance in the World Series, or National Bible Week, for example), but the majority of his corpus deals with the Cold War, the geopolitical crisis of his day. Many of Carmack’s Cold War cartoons express popular American sentiment from the period: strong approval for President Eisenhower, a combative opposition to the Soviet Union, and low tolerance for communist sympathies in other countries. 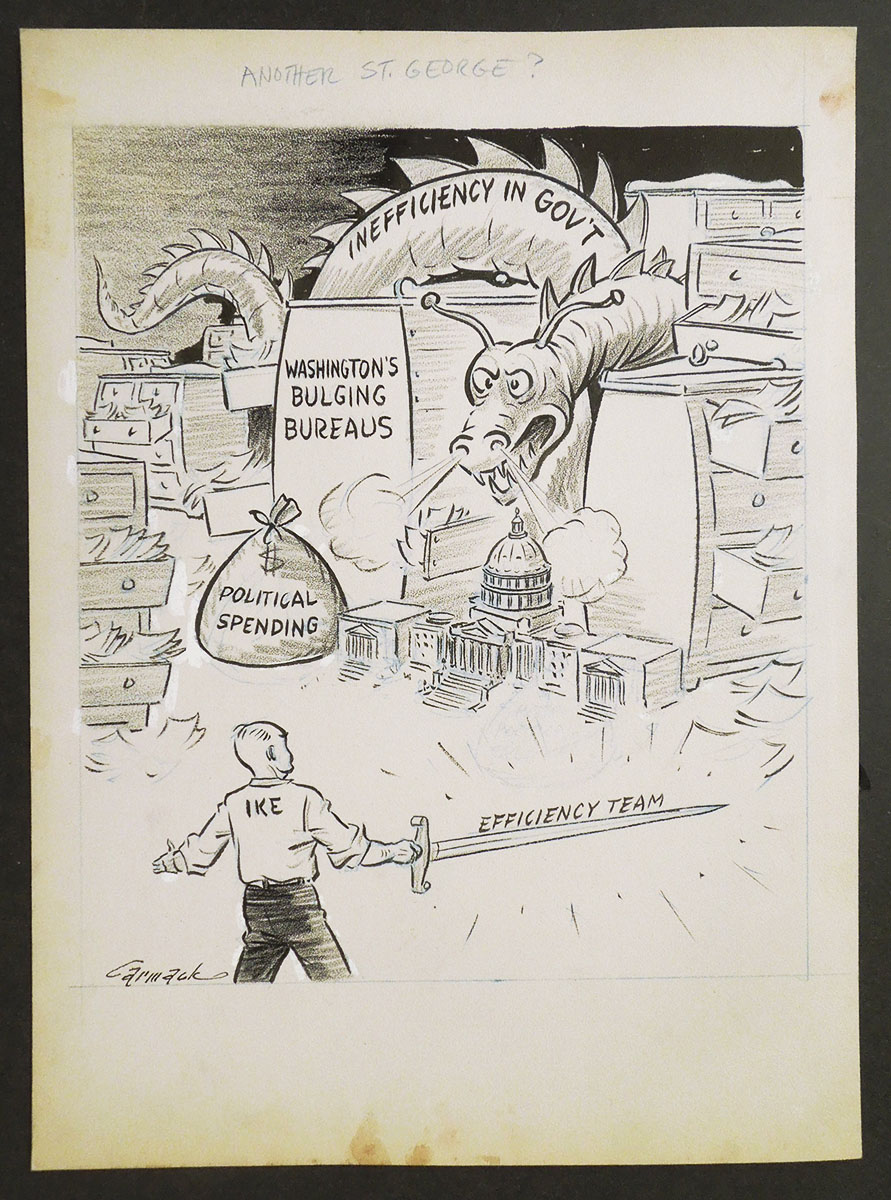 What distinguishes Carmack’s cartoons from the work of other artists is his Christian sensibility. For Carmack, the Americans’ key advantage in the Cold War was their moral superiority. He believed that the US had a stronger sense of community and moral righteousness than the Soviet Union. Even when the US was “losing”—when the USSR launched the Sputnik satellite in 1957, for instance—he believed that American “moral power” would win out in the end. American unity was based in Christianity for Carmack. Indeed, Christian morality is a critical defense against communism, in Carmack’s view, just as important as military or economic strength. 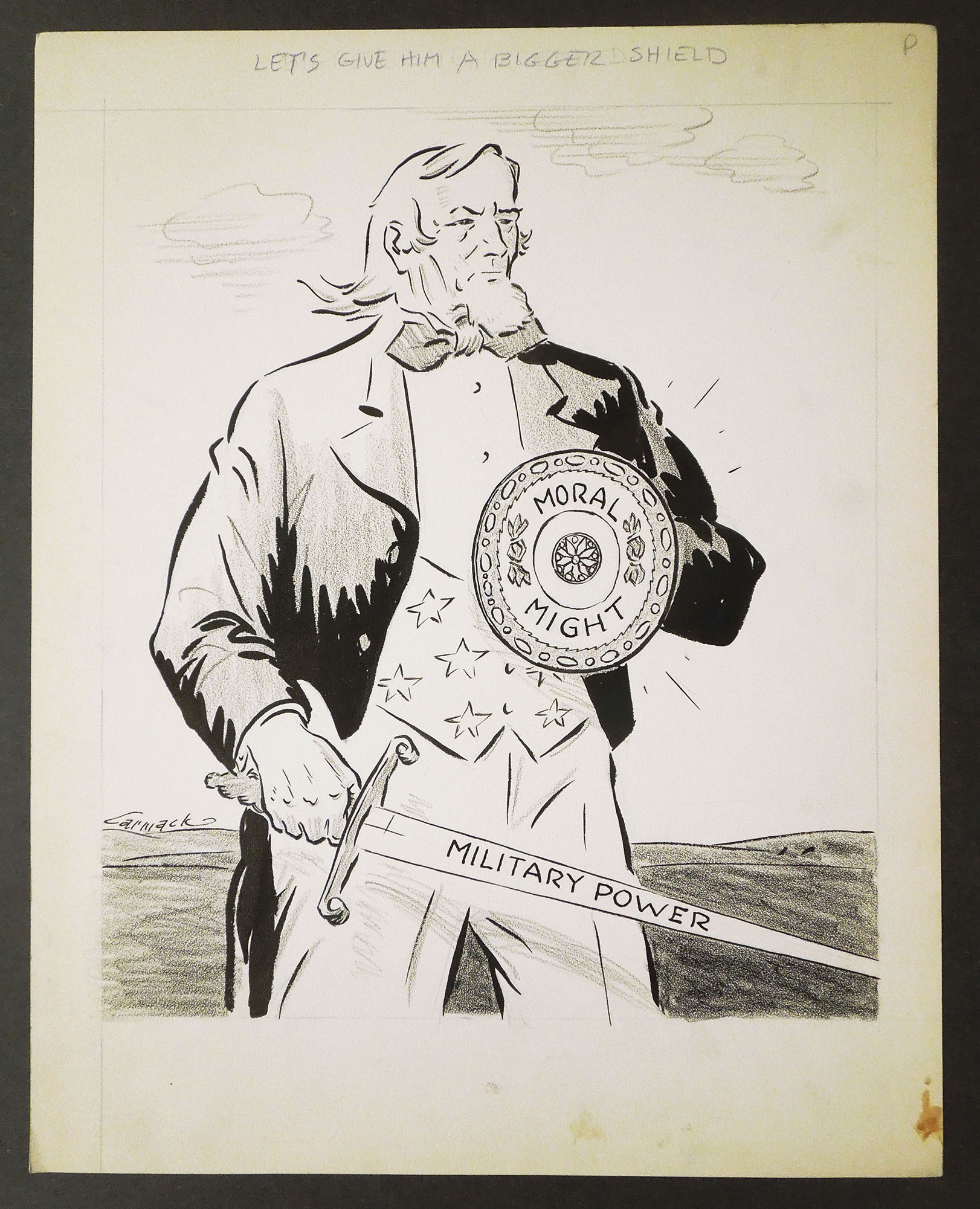 “Let’s give him a bigger shield” by Paul Carmack, September 17, 1951. Paul R. Carmack Collection and Papers

Clearly, Carmack took pride in American religious freedom, and expressed ambivalence towards the secularization of American society. While he supported American advancements in scientific research and economics, especially when these advances helped the Cold War cause, he worried that religion may get left behind. 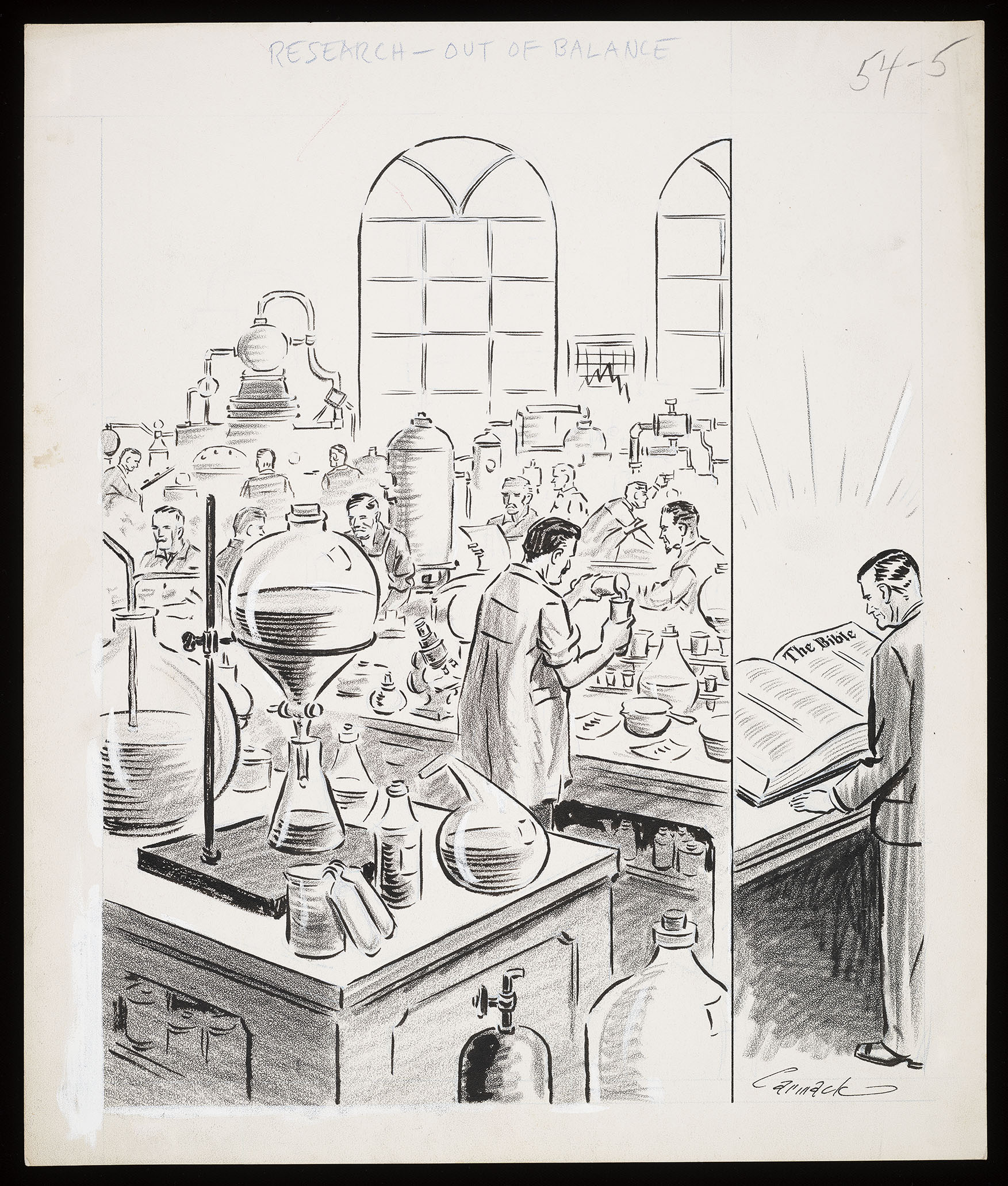 The importance of Christianity extends beyond American identity to morally justify the actions of the United Nations in Carmack’s cartoons. Carmack has a tendency to represent the US, the West, and the UN interchangeably with the same globe-headed man in a fedora, implying that American values were globally accepted, and further justifying the United States’ moral righteousness. In this sense, the Bible is not just the United States’ defense, but “The World’s No. 1 Defense.” 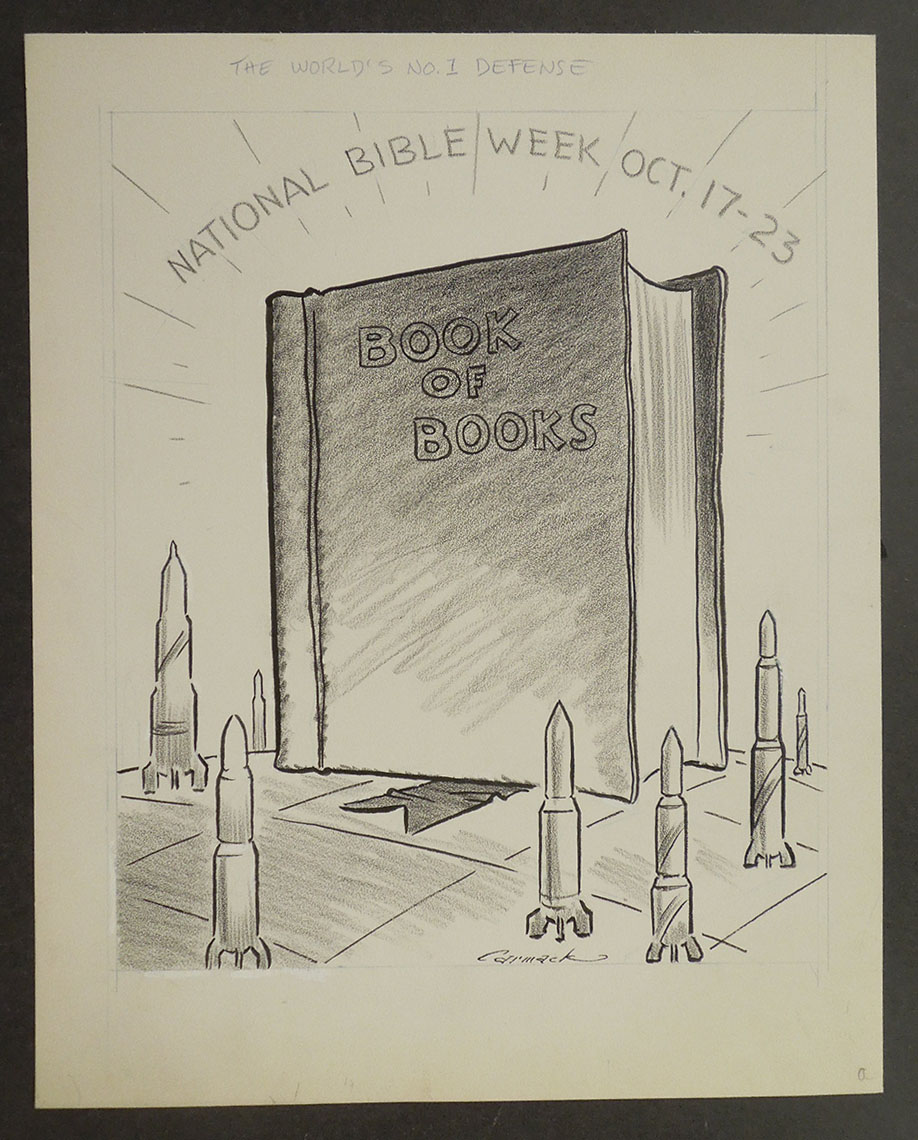 While I appreciate how Carmack gives global events a personal perspective in his cartoons, I think it is important to understand moments where his American subjectivity causes him to misrepresent historical fact. As a case study, I turn to a cartoon about the Congo Crisis, a power struggle which began after the Congo declared independence in June of 1960. A military mutiny, secessions by the Katanga and South Kasai regions, and violence between black and white citizens led to the dispatch of UN peacekeepers to the Congo. However, UN Secretary-General Hammarskjöld did not let the peacekeepers fight the secessionists, so the central Congolese government called on the USSR for additional aid. The US interpreted this call for aid as an expression of communist sympathy. 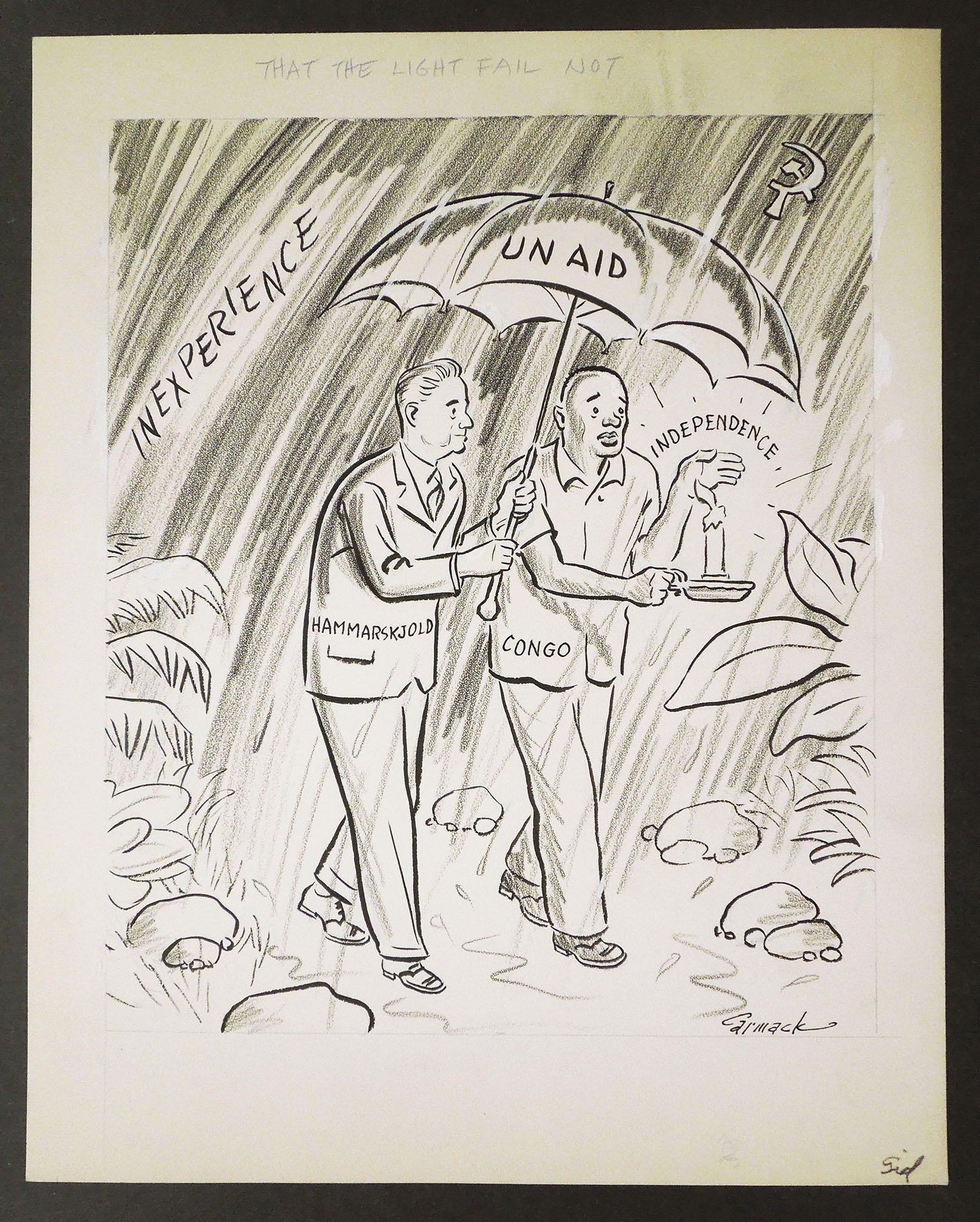 “That the light fail not” by Paul Carmack, August 10, 1960. Paul R. Carmack Collection and Papers

In this cartoon, dated August 10, 1960, Hammarskjöld leads a Congolese man through a rainstorm of communism and inexperience. The rain, which threatens the candle of independence, registers keywords which reduce the nuance of the Congo Crisis to Cold War buzzwords. “Communism” implies that the Congo wanted to be a communist nation; in reality, the social transition from colonized to independent nation was a larger issue than the choice between economic systems. As Americans, Carmack and his audience would have seen the involvement of the USSR in the Congo as a serious threat, worthy of representation in his cartoon.

Similarly, to imply that the Congolese were at fault for their political “inexperience” erases the historical fact of their exploitation under Belgian imperialism for 90 years. It was impossible for the Congolese to gain experience as leaders while living in a system that oppressed them. But, again, this point of view may not have been obvious to Carmack, who was born only 25 years after the Belgian empire began. The cartoon also positions Hammarskjöld (a proxy for the UN) as a guiding, paternal figure, and does not give the Congolese person the agency to weather the storm by themselves. While I, as a 21st century viewer, may read this as a dismissive assumption of Congolese “inexperience,” Carmack’s intention may have been more like a statement of brotherly cooperation. Even if I could see inside the artist’s mind, it would be impossible for me to recreate the cultural conditions of the 1950s and perfectly comprehend his point of view. Carmack lives and works in the midst of a Cold War proxy war, whereas I write and work with 60 years’ worth of historical distance.

I do not make this analysis to say that Carmack is insensitive to the plight of oppressed peoples worldwide. As evidenced in his other cartoons, Carmack feels duty-bound as a moral Christian person to support the freedom of all. He expresses sympathy for the Hungarians after the Hungarian Revolution of 1956, and his cartoons on the American Civil Rights Movement are similarly sympathetic. He has a strong sense of right and wrong that guides his cartoons and worldview at large. 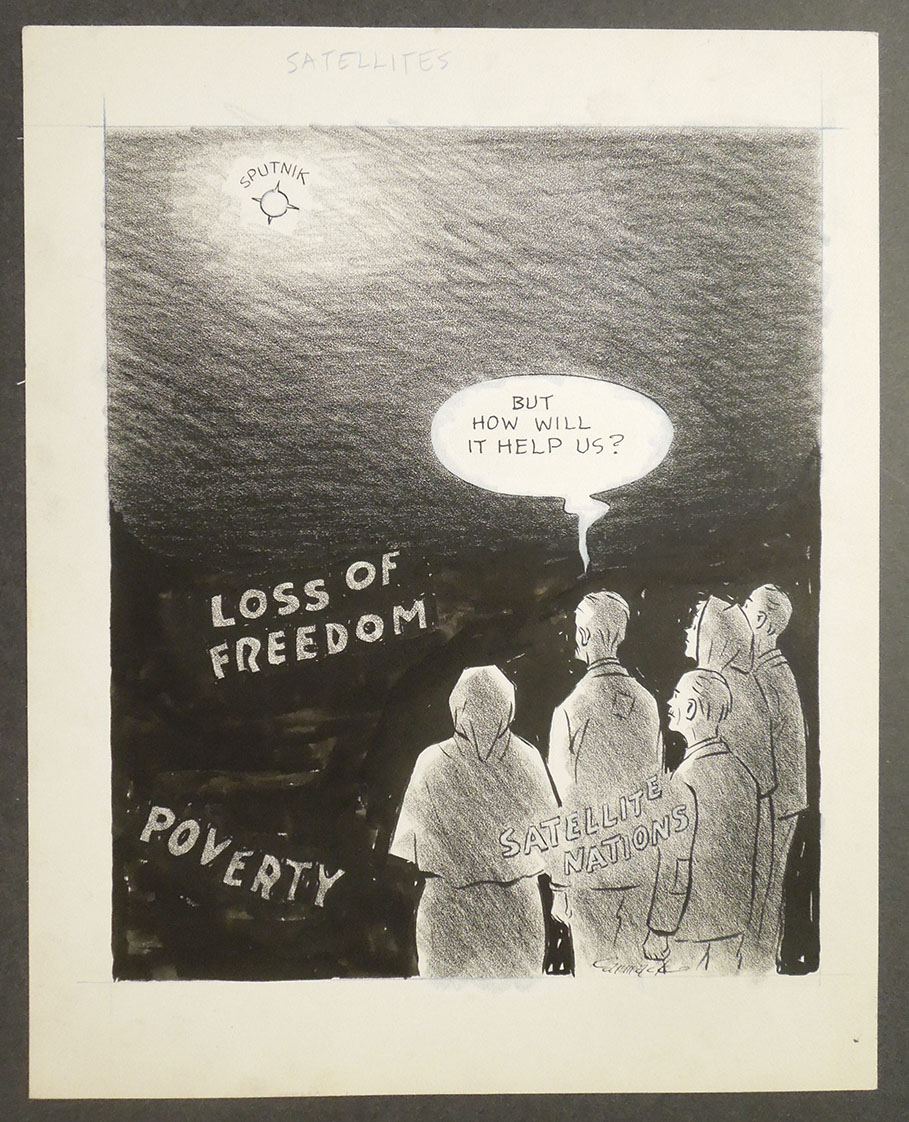 I think that the fault lies not with the man, but with the era in which he worked. We must remember that Carmack needed his cartoons to be understood by a wide audience, and in order to ensure mass understanding, historical reduction may have become a necessary evil. I think the same explanation works for Carmack’s use of illustrative tropes, such as the globe-headed man, or a group of white men to represent all Americans, which may seem outdated or insensitive today. In reality, these tropes were standard for 1950s representation. Just as the artist has his bias in the 1950s, so too are we biased from our perspective as 21st century viewers. Carmack’s cartoons are historical objects, representations of the world as he saw it and lived it, and it is our duty as viewers to respect that reality.