Dr. Ian Gordon is an Associate Professor in the Department of History at the National University of Singapore. He has written dozens of articles and books about comics history, and his most recent book is Superman: The Persistence of an American Icon (New Brunswick: Rutgers University Press, 2017). Dr. Gordon recently spent a week in our Reading Room conducting research, and we asked him a few questions about his time here.

Can you tell us about the research project that brought you to the Billy Ireland Cartoon Library & Museum?

In Italy, Norway, and Brazil weekly comic supplements or children’s magazines published versions of [R.F. Outcault’s influential comic strip] Buster Brown as early as 1905. I am working on a project comparing these different versions of the strip to the American original. So far, I have visited both Italy and Brazil to acquire materials and hire translators. For this project then I needed reference copies of the American comic strips.

In the early 1990s, I read a lot of Buster Brown strips but I did this using microfilm of newspapers at the Library of Congress. I visited [San Francisco Academy of Comic Art founder] Bill Blackbeard in San Francisco in 1992, and he generously gave me free range in his collection, but it would have taken weeks and probably months to sort through his storage facility and locate all the Buster Brown strips. As a graduate student, I couldn’t afford to spend that amount of time on the process or indeed the cost of staying. So for me it was a real delight to visit the Library and get that material. 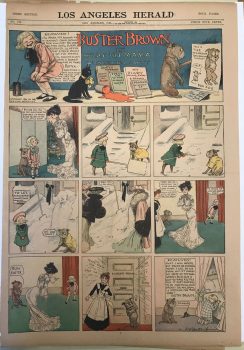 Did you make any unexpected finds in the collection?

Well, not so much in the Buster Brown material I was looking at, but there were many potential distractions in the other strips in the boxes. I did find a satire by Frederick Opper of Henry James’ work. Or at least an account by Henry James entitled “What Henry James Saw and Heard in New York,” with illustrations by Opper. The illustration undercut the text and so the piece and the satire appeared side-by-side in Hearst papers on January 21, 1906. An early example of repurposing material perhaps. 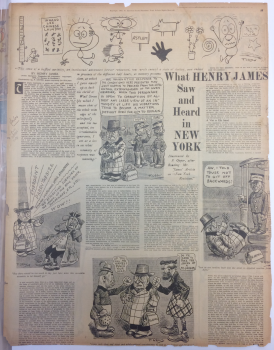 Frederick Opper, “What Henry James Saw and Heard in New York,” 1906. From the San Francisco Academy of Comic Art Collection.

What were some of the most interesting items you found?

Well I got over 800 images, so trying to single out the most interesting is hard. Probably what’s most interesting is the change in Outcault’s style over time, with some of the strips from the mid-1910s being much more colourful and dynamic than the earlier strips.

What was it like to conduct research at the Billy Ireland?

I did a day’s research at the Billy Ireland in 2013 around the time the new building opened when I was here for a conference. I walked in and was greeted by Eddie Campbell, who heard an Australian accent and introduced himself. Later my friend Christina Meyer arrived for her research on the Yellow Kid. In the afternoon that day, Eddie introduced me to Audrey Niffenegger. At one stage, Eddie, Christina and I were all calling each other over to look at our finds. It is hard to top that day, but let me say–this time I had a wonderful research trip. 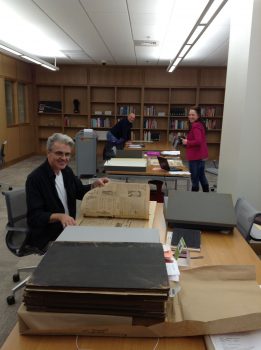 Left to right: Scholars Eddie Campbell, Ian Gordon and Christina Meyer happened to be visiting the Lucy Shelton Caswell Reading Room from Australia, Singapore, and Germany on the same day in 2013.

Can you tell us a bit about your process, and how you found these resources?

My early research on comic strips in the 1990s was mostly conducted at the Library of Congress using microfilm. I spent months in the semi-dark scrolling through film getting motion sickness. As I mentioned I visited Bill Blackbeard in San Francisco and he gave me access to his collection, and very generously copies of reprint editions he had done and even a Buster Brown strip. But the collection was not organized in a way that made it usable for a researcher with a week or so to find a lot of material. To walk into the Billy Ireland, where the relevant boxes were organized and pulled from the stacks for me was great. Everything is so well organized, the experience was as painless as possible. I photographed all the strips with my phone. I will then compare these strips with strips from other countries and try to match up various translations to see what they tell us. I got through the equivalent amount of material in days that would have taken me months and months in the 1990s. And everyone was so friendly.

Any highlights from visiting the city of Columbus (food, stores, bars, museums, etc)?

I stayed downtown and walked in through the Short North each day. In the evening, I went through the day’s haul and dated the material so I didn’t lose track. So I didn’t venture out much. But when I was here in 2016 for CXC I went to a tiki bar with comic scholars Brannon Costello, Craig Fischer, Andrew Kunka and Ben Woo. It was wonderfully tacky. The cartoonist Dustin Harbin was so entertaining in my hotel bar that I was up much later on my first night than I intended. I wish I could remember the two restaurants I ate at that trip because they were both good but their names escape me. This time I had dinner at Martini, which was a decent Italian place. So yes, I have been to Columbus three times and I hope to be back a fourth time in 2018 for CXC.

To see more of Ian Gordon’s research and work, visit his website.