Kickin’ it with the Collegiennes

Did you know that OSU once had its own all-female precision marching corps? Micki Lee, a 1959 graduate, recently contacted the Archives about her involvement in the Buckeye Collegiennes, a dance-drill team that performed both cheerleader-style kick lines as well as military drill sequences. 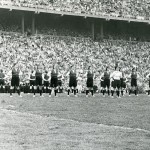 According to Lee (whose last name was Umbaugh when she was an undergraduate), Mania Moore, a Dayton native, started the group in spring 1956; the next year, Umbaugh was elected the group’s President and Commander. Under Umbaugh’s leadership, the drill team became proficient not only in marching, but in dancing routines. The group, which consisted of 50 performers and 20 alternates, worked closely with the campus’ Air Force ROTC, as well as Jack Evans, the director of the Ohio State University Marching Band, in choreographing the routines. Its adviser was Jane McCormick, Assistant Dean of Women. 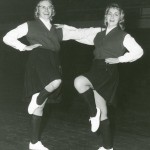 Lee says in her recounting: “Discipline, correct breathing, posture, and conditioning of each member was VERY important in the training program! The girls were graded on their performances, etc., and received demerits for lack of neatness, tardiness, being unprepared, etc. They also had to have musical ability and be able to know which yard line to be on for each measure of music, in order to execute all the formations properly … and make them look perfect when seen from the top row of seats in the stadium.”

At the Homecoming game in October 1957, they performed during half time, in front of nearly 83,000 fans. After that game, according to Lee, they were asked to lead the annual May Day Parade, perform at St. Johns Arena for basketball games, and entertain during other football game half-times, such as Dad’s Day. They were even asked to perform at the next Rose Bowl, and at the Thanksgiving Day Parade in New York for 1958; however, a lack of funds kept them from going. During a performance, the group would perform three to four routines, to such music as “March of the Toys” “St. Louis Blues,” and “There is Nothin’ Like a Dame.” Lee says they soon became known for concluding their performance “with their famous precision kick-line.” 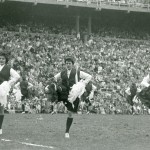 According to Archives resources, the group remained active until the early 1960s. They disappear from the records, until fall 1971 when they show up again – with the addition of knee-high white boots and kick lines. The first performance of the new team took place in 1972. They performed at Homecoming parades, occasionally at other OSU sporting events, and – at least that year – during the season opening of the Kings Island Amusement Park. For several years in the 1970s, the team attempted to perform with the OSU Marching Band during football half-time shows, but the band always declined. After 1975, the record trail stops, so it’s unclear how much longer the team survived.

We’d like to thank Mrs. Lee very much for her contribution to our history of the Collegiennes. Without her help, we would not have nearly as much information about the team, and we appreciate her taking the time to send us her recollections.

This month marks the 75th anniversary of a much-loved OSU tradition—Script Ohio. 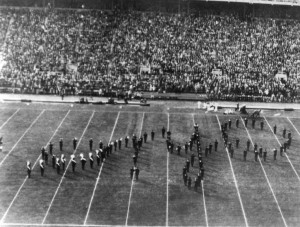 Interestingly, the first performance of Script Ohio was by the University of Michigan’s marching band in 1932. According to the student newspaper, The Michigan Daily: “Probably the most effective single formation was the word ‘OHIO’ spelled out in script diagonally across the field in the double-deck Ohio stadium to the accompaniment of the O.S.U. marching song, ‘Fight the Team.’ ”

It wasn’t until four years later, in October of 1936, that the OSU Marching Band first performed Script Ohio in Ohio Stadium. There is some debate over which game exactly: It was either on Oct. 10 when OSU went up against Pittsburgh or Oct. 24 when OSU played Indiana. Surprisingly, a trumpet player (John Walter Brungart) dotted the “i” that day. Four games later, a sousaphone player (Glenn R. Johnson) dotted the “i” on the orders of band director Eugene Weigel. The characteristic turn and bow performed by the sousaphone player did not become part of the “i” dotting tradition until 1938.

Some interesting facts: Since position charts were not yet in use, the first drum major, Wesley Leas, led the band through the new formation out of necessity rather than ceremony. And the band has gotten larger: The original band had 120 pieces; now there are more than 200. 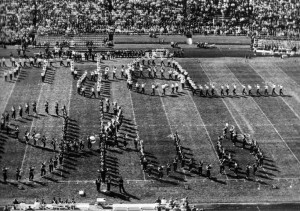 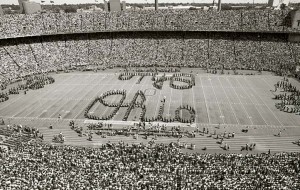 Would you like to learn even more about the history of the OSU Marching Band? Either visit its Web site at http://tbdbitl.osu.edu/ or read a very thorough history of the band called Script Ohio. (We have several copies here at the Archives you can peruse.)

(Editor’s Note: After further research, the Archives staff was able to determine that the OSU Marching Band first performed Script Ohio during halftime of the football game between OSU and Pittsburgh on Oct. 10, 1936. KCH 10/10/2013) 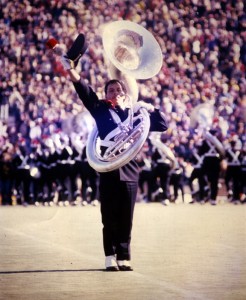 You might have heard last weekend that Jon Woods, director of the OSU Marching Band for the past 25 years, is retiring after this season. We are sorry to see him go, and we thought we’d take the opportunity to tell you a little bit more about the directors who came before him. (Our thanks to the editorial staff of Script Ohio, a must-have for any OSU Marching Band aficionado who wants to have the full score on the band’s history.)

The band started in 1878 as an all-student affair – a drum corps to play accompanying music as ROTC cadets marched. It wasn’t until 1896 when Gustav Bruder was hired as the first full-time director. Bruder had quite a military background: He was accepted into the U.S. Army at age 12 and played for the Columbus Barracks Band. He was offered a position in the U.S. Marines Band by none other than John Philip Sousa. When he started the job as OSUMB director (1896-1928), there were only about a dozen students; by 1914 he had increased the number to 64, and by 1921 there were 100. Under his leadership, the band began playing at football games, they performed the first O-H-I-O, and started wearing spats and pompons. 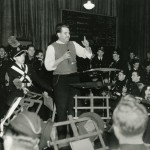 Eugene Weigel was the next director, serving from 1929-1938. He had served as supervisor of instrumental music for the Cleveland Public Schools for five years before leading the OSUMB. While serving as OSU Marching Band director, he was a professor of music at OSU, and was the head of the School of Music for five years afterward.  Under his leadership, the supervision of the band transferred from the Dept. of Military Science to the School of Music, the entrance to the Stadium ramp incorporated the herald trumpet fanfare and the band playing the Buckeye Battle Cry, the band transformed from the traditional woodwind, brass and percussion to all-brass and percussion – the first all-bass college band in the U.S. – and “Script Ohio” was introduced.

The next director, Manley R. Whitcomb (1940-1942 and 1946-1951), was the first with a Ph.D – in education, from Columbia University – and had been assistant to Eugene Weigel. Before “Whit,” as he was called by band members, came aboard, only the director had a chart of formations. Whitcomb gave every member of the band a copy, which enabled more complicated formations. He also introduced the “8-to-5’ style of marching in which members would make eight steps for every five yards, and the accompanying high knee and leg lift. This allowed the band to match the phrasing of music, which meant even more complicated routines.

From 1943 to 1945, while Whitcomb served in the Army, William B. McBride served as director. He had served as supervisor of music for several townships, then as instructor of music at both Ohio Northern and Miami universities, before coming to OSU. After Whitcomb returned, McBride continued to serve as associate, then full professor of music at OSU until his retirement in 1970.

Jack O. Evans, former director of instrumental music for the Shaker Heights school system, began his tenure in 1952, after serving as Whitcomb’s assistant for four years. One of his biggest accomplishments was to move the band rehearsal room from a stock judging pavilion to the Stadium recreation room, which also meant there were two nearby practice areas – the Stadium parking lot and the fields behind the south end of the Stadium. He’s also credited with introducing the Orton Hall chimes arrangement to introduce “Carmen Ohio” at the end of each game. Also during his tenure, the first sound motion pictures were made of the band, by the OSU Dept. of Photography and Cinema.

Charles O. Spohn started his OSU career long before he served as OSUMB director (1964-1969). He first served as associate conductor of the OSU Concert Band in 1951, shortly after receiving a bachelor of music degree from Butler University. While he was OSUMB director, two important band traditions were introduced: the band’s arrangement of “Hang On, Sloopy,” and the TBDBITL alumni band, which annually combines with the OSUMB to perform multiple “Script Ohio”s. He also introduced indoor concerts and marching practice before the Saturday skull sessions.

Paul E. Droste (1970-1983) began his long association with OSU as an OSUMB member in the 1950s, the only director to do so. After serving stints as music director for several Ohio school districts, he returned to OSU to interview for the top band job, just before the campus was closed because of student demonstrations. Even so, Droste took the job, and spent his first year as director leading centennial-themed shows to celebrate the University’s 100th year. During Droste’s tenure, the and was expanded not only in number – by 50 mnusicians – but also in gender. For the first time ever, women were allowed to try out to be members during the 1973 season.

Then, of course, there is Jon Woods, who has served as director for the past 25 years. Woods served as associate director for 10 years before that. One of his first innovations as director was charting the formations by computer; he also initiated an invitational for high school bands in order to recruit members. Also during his tenure, the uniforms were updated, and the band had its first female assistant director. It also moved into its current location, the Joan Zieg Steinbrenner Band Center.  Read more about Woods in the Dispatch story here. (http://www.dispatch.com/content/stories/local/2011/09/03/jon-woods-retires.html)