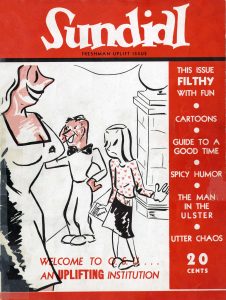 On the morning of October 5, 1944, a new issue of the Sundial hit the Ohio State newsstands.  For twenty cents, anyone could purchase the “Freshman Uplift Issue” of the student-run humor magazine.  The cover, a cartoon, depicted a freshman girl upset at her companion for staring at another woman; the sidebar read “this issue filthy with fun.”  The magazine was riddled with sexual innuendos, double entendres, and risqué pictures of scantily clad women, while the centerfold included a detailed article that read: “FRESHMEN: HAVE FUN IN BED; Some Pertinent Notes on Sleeping with Strangers.”  By the end of the day, University President Howard Landis Bevis ordered all copies of the “Sunny” turned in to his office, declaring it “the filthiest issue” produced.

The September 1944 issue is perhaps one of the most controversial of the Sundial to date, but it wasn’t the magazine’s first run-in with University administrators that school year.  Earlier in the year, the March issue of the Sundial faced accusations of printing nude photographs and obscene jokes.  Bevis, who had previously warned the Sundial to clean up its crude content, addressed Professor James E. Pollard of the School of Journalism—through which the magazine was published—about his discontent with the magazine’s false promises of improved content on March 31, 1944: “The result is always the same—a ‘clean up’ for an issue or two, jocosely referred to in the improved editions, then further descent to the depths.” 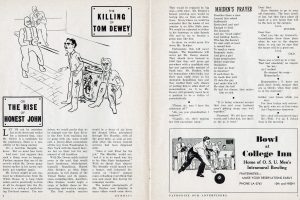 “The Killing of Tom Dewey or the
Rise of Honest John” in the September 1944
issue of the Sundial.

Concerned about the University’s image, Bevis called for an investigation of the Sundial under the Committee on Student Publications.  The Sundial faced repercussions as a result of the March issue, as the committee provided strict guidelines for the magazine which included “warn[ing] the Sundial staff to improve the quality of the remaining issues this spring of 1944” or face further problems with the University.  The committee also demanded the appointment of a censorship board that promised to “carry out the strict standards outlined in our discussions” by heavily editing the magazine’s content, hopefully ridding the repeated inappropriateness of the Sundial. 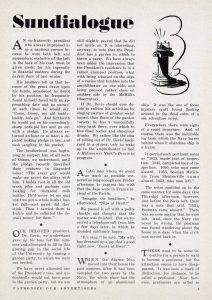 The satirical piece regarding
University President Howard Bevis,
“Our Beloved President,” in the
September 1944 issue of the Sundial.

However, the magazine proved its inability to clean up its content and finally went too far for Bevis.  Its punishment resulted in Bevis’s suspension of the Sundial indefinitely after dismissing the two newly-appointed student editors and the student business manager.  However, the explicit sexual overtones were probably not the single issue that Bevis found appalling in the October-released issue.  Page six bore the satirical article “The Killing of Tom Dewey or the Rise of Honest John,” which regarded John Bricker, an Ohio State alum who was the Governor of Ohio and Republican nominee for Vice President in 1944.  The same article poked fun at the Alumni Monthly, an Ohio State-sponsored publication read by thousands of alumni, some of whom contributed financially to the University.  A few pages earlier, the issue featured a short soliloquy about Bevis’ supposed lavish lifestyle compared to that of the students at Ohio State, remarking on his out-of-touch and supposed questionable philosophies.

The reaction to Bevis’ disassembly of the Sundial was mixed among the University crowd.  In personal correspondence to the president, some students and parents praised his actions and swift justice.  However, others felt the Sundial did not deserve to be shut down, as seen in some guest editorials published in the student newspaper, The Lantern.  Students made the argument of replacing the staff rather than shutting down the magazine altogether.  One student wrote to The Lantern that “such a magazine is necessary to the campus,” while another wrote “[students] feel that the University was a little too harsh in suddenly discontinuing its publication.”  One student even argued the staff was only catering to the public’s demands, therefore deserved no punishment for their actions. 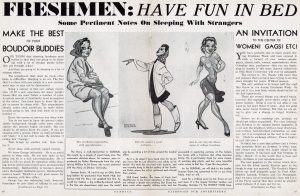 The controversial “Freshmen: Have Fun In Bed”
spread in the “Freshman Uplift Issue” of
the Sundial, September 1944.

A week after its termination, a petition to begin a new humor magazine launched, then an official request for the new magazine was submitted to the president’s office in February 1945.  President Bevis and Vice President Bland Stradley agreed to the publication, but they required specific guidelines: the magazine must launch two trial issues; the magazine must have an acceptable budget; there must be an editor, art editor, and business manager; a faculty advisor has full authority over the magazine content; and, finally, a new name must be found for the magazine.  A contest was held which allowed the student body to contribute to the new name; students provided the new magazine with 550 name suggestions.  The winner of the contest was Scarlet Fever, which printed its first issue in May 1945. 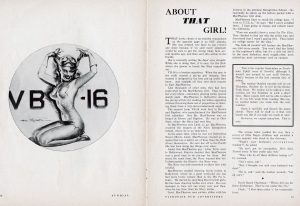 Another questionable and sexually explicit sketch
in the September 1944 issue of the Sundial.

The name change went over well with many students but did not sit well with alums, most notably previous Sundial contributors like James Thurber and Gardner Rea, both of whom were well-known authors and illustrators.  The two men pushed for the switch back to Sundial, as they both felt it held a stronger place in Ohio State’s heart than Scarlet Fever.  “Frankly,” Rea wrote to Bevis, “I could never see the slightest need for the change in the first place. I could see the need for a complete staff change … but no reason for the change of name. […] Scarlet Fever means nothing to anybody.”  Bevis defended the name change, stating the Sundial’s lifespan was over and Scarlet Fever was the new, better-welcomed humor magazine.

Most students changed their minds about the new magazine just three months after the first issue of Scarlet Fever hit the newsstands.  A large group of petitioners from across campus demanded Scarlet Fever change its name to its predecessor.  This eventually caught fire in the president’s office, as Bevis approved the name change in late 1946.  The Sundial reclaimed its title as Ohio State’s official humor magazine in October 1946, just over the two-year-anniversary of its banishment from the campus.