Bleeds Scarlet and Gray: Bartels turned passion for athletics into winning career as coach and educator

August 4, 2017 / haire.14@osu.edu / Comments Off on Bleeds Scarlet and Gray: Bartels turned passion for athletics into winning career as coach and educator

Written by Olivia A. Wood

After the recent passing in June of Dr. Robert “Bob” Louis Bartels, his family was kind enough to bring some of his material to the Archives that related to his career at OSU. When we looked at the material, we discovered that while Bartels was known to many as a head coach for Men’s Swimming and Diving, his impact on campus and the community was much greater than that. Bartels, born on November 14, 1928, was also a swimmer and professor at OSU, and he held many leadership roles in professional and community organizations. 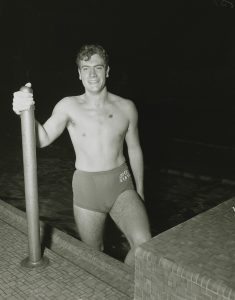 Bartels stands at the edge of the pool, 1950

During his undergraduate career, Bartels swam for The Ohio State University men’s swim team from 1949 until 1951.  Under the leadership of the legendary Coach Mike Peppe, Bartels and his teammates won three Big Ten and two national championship titles.  Along the way, he earned a Varsity “O” in swimming, and in 1949, Bartels was named as a first-team All-American “as one of the best breaststrokers in the country,” according to a Department of Athletics obituary. 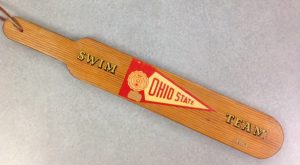 Bartels received a paddle from the 1963 men’s
swim team with all of their signatures on the back.

Having swum for Ohio State, Bartels went on to coaching at Kenyon College, Ohio University and The Ohio State University.  Bartels served as the freshman swimming coach at Ohio State while working towards his Master’s degree. Then, from 1952 until 1954, Bartels worked as the head swimming coach at Kenyon College, where he led his team to win the Ohio Conference Championship. (During that time, he also served as the Assistant Director of Athletics there.) Bartels maintained the same position, along with the appointment as tennis coach, during his time at Ohio University. Bartels returned in 1959 to Ohio State where he served as an assistant swimming coach under Peppe.  In 1962, under their guidance, the team won the national championship title.  Bartels took over as the head swimming coach after Peppe retired in 1963, and he coached the team until 1967.

Meanwhile, Bartels was building his academic career. While coaching at Ohio University, he was an Instructor and Assistant Professor of Physical Education.  After returning to OSU in 1959, Bartels served first as an Instructor, then as an Assistant, then Associate, then full Professor of Physical Education.  He also served as chairman of graduate studies for that department.

In 1980, he helped establish the Cardiac Rehabilitation Program, a joint venture of the Department of Health, Physical Education and Recreation, and the Student Health Center. In the program, heart attack victims learned to incorporate an exercise program into their recovery. It was a new concept at the time; previously, people who had suffered heart attacks were told to rest. But Bartels and his colleague, Prof. Edward L. Fox, concluded the heart, like any muscle, benefits from regular activity, so they created the program to teach survivors how to exercise successfully without creating more stress. 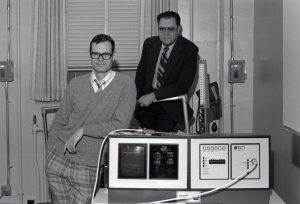 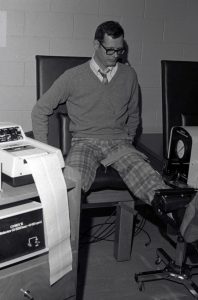 During his professional career, Bartels published more than thirty academic publications and thirteen academic papers on that and other subjects related to physical education.

Bartels didn’t limit his professional contributions to teaching and coaching, though. From 1963 until 1986, Bartels served as the chairman of Safety Services for the Columbus Area Chapter of the American Red Cross. He also was elected as a member of the Commodore Longfellow Life Saving Society, a water safety program run by the American Red Cross.  In 1968 Bartels was elected to the Board of Directors of the College Swimming Coaches Association of America; he was elected as president in 1971. For his efforts, he received the “Distinguished Coach Award” in 1972 and the Honor Service Award for Service to Aquatic Sports in 1980, both from the Coaches Association. In 1979, Bartels was named as a Fellow of the American College of Sports Medicine. 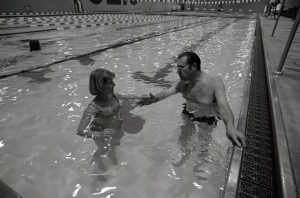 Bartels works with an OSU employee in the
Faculty Staff Fitness Program.

Bartels didn’t end his contributions after retirement.  He officially retired from Ohio State on January 1, 1989, upon which the College of Education appointed him as Professor Emeritus, and he continued to teach courses in Physical Education for many years.  Bartels also joined the Ohio State Retirees Association, and he was elected to the position of President in 1991.  The former athlete can be found in two different Hall of Fames on Ohio State’s campus: The Athletic Hall of Fame and the College of Education Hall of Fame, in which he was inducted in 1998 and 2002, respectively.  Bartels also served on the Board of Directors of the Varsity “O” Association.

Finally, faculty and staff who participate in the Your Plan for Health program to stay healthy and active, aren’t the first on campus to be guided toward healthy fitness choices. In 1975, Bartels created the Faculty Staff Fitness Program.  The program offered OSU faculty and staff participants access to a gym, a personalized health and exercise management program, sports trainers, and dietary counseling.  Bartels served as the director of the Faculty Staff Fitness Program from its beginning until 1989. 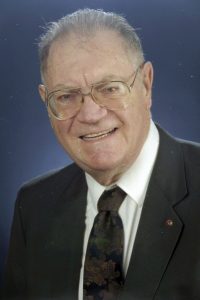