Known for its penguins and the aurora australis, Antarctica is a cold, snowy land so inhospitable that its most numerous resident is a species of wingless fly. These unlikely tenants inhabit a land largely covered in ice. Without ice, Antarctica would be about 2.7 million square miles; with its icecap, however, it 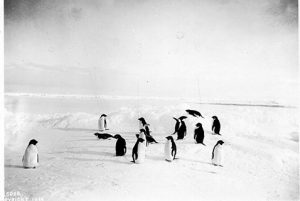 doubles in size. Throughout the year, water along its edges freezes into ice, and then melts into liquid water once again, creating an ice floe moat guarding the continent. Trapped within the ice is about ninety percent of the world’s fresh water.  Antarctica is the world’s southernmost desert, receiving only about two inches of precipitation a year. This precipitation falls as snow, which has accumulated over the course of Earth’s history to cover much of the continent. This snow ensures cold temperatures and, although Antarctica receives more sunlight in its summer than the equator, most of this sunlight is reflected by the snow.

Such a landscape challenges anyone who dares to set foot on the frozen continent, yet it is that very challenge that attracts explorers, scientists and researchers. Early explorers faced very real risks including starvation, freezing, or going mad during the long winter. The snow causes its own problems, making travel through some areas nearly impossible by occasionally causing ‘whiteout,’ removing all shadows and the ability to perceive depth. 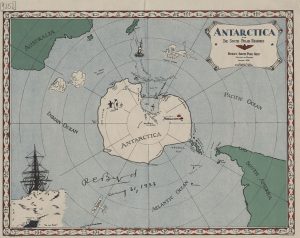 Before it was first explored, it was believed that Antarctica consisted of rich, arable land. It was Sir James Cook, who disproved this idea in the late eighteenth century. Cook unknowingly spent three years circling the continent without actually seeing it. He determined that if there was a southern continent, it was at the very center of the Antarctic Circle. Cook also noted the extensive numbers of whales and seals in southern waters. Whalers and seal hunters flooded south, seeking new seal colonies and mapping the coastline of Antarctica. 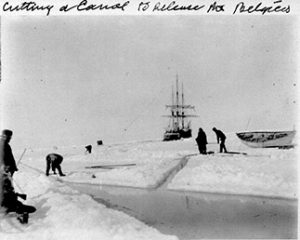 Cutting a canal to release ‘the Belgica’

After the profit-seeking era of sealers came “the Age of Heroes,” a time when men used their own determination and luck to penetrate the unseen interior of Antarctica. Though many would die in their attempts to explore this last unknown frontier, some would achieve fame.  In 1897, a multinational crew including the Norwegian Roald Amundsen and the American Dr. Frederick Cook sailed to Antarctica on board the ship Belgica. Arriving in Antarctica late in the exploring season, they soon found themselves trapped in the ice for over a year before they were able to cut a channel to open water and return to Europe.  This experience was not enough for Cook and Amundsen, who both continued their quest of polar exploration.  Amundsen would later be known as the first to the South Pole in 1911. 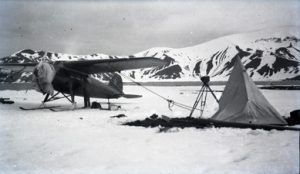 One of Wilkins’s Antarctic planes, 1928

Even as recently as the 1920s, most of Antarctica was still unseen by human eyes. That all changed with the arrival of modern technology on the continent. In 1928, Sir Hubert Wilkins used airplanes to explore and map more than one thousand previously unknown miles of the continent. He noted that “it had taken us three months, on foot, to map forty miles; now we were covering forty miles in twenty minutes.”  Richard E. Byrd was the first to fly from the Antarctic coastline to the South Pole in 1929.  In 1933, Byrd sent the first radio broadcast from Antarctica back to the United States.  Byrd would make several more expeditions to Antarctica in his lifetime; many other explorers would follow. 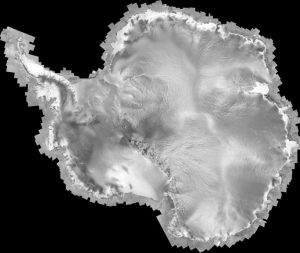 The work in Antarctica is ongoing.  Modern expeditions study the impact Antarctica has on global weather patterns, as well as the effects of global climate change. The Ohio State University’s Byrd Polar and Climate Research Center (previously known as the Institute of Polar Studies) has sent numerous expeditions to Antarctica, including an all-woman team led by Lois M. Jones and expeditions which found the first vertebrate and mammal fossils in Antarctica.

Text written by Autumn Snellgrove and edited by John Hooton