(In celebration of the University Archives’ upcoming 50th Anniversary in 2015, we bring you “The Twelve Days of Buckeyes.” This is day 11 in a series of 12 blog posts highlighting the people who were instrumental in the creation and growth of the Archives.) 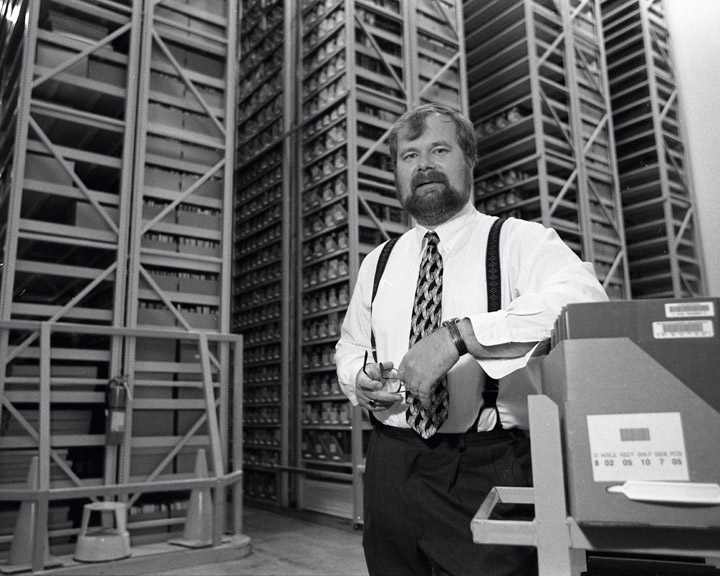 When Raimund Goerler began his career as University Archivist in 1978, there were approximately 3,500 cubic feet of OSU historical materials spread among five rooms of Converse Hall. The Archives shared space with ROTC areas, such as the shooting range, that were not so friendly to quiet research. By the time he retired in 2010, the Archives included roughly 15,000 cubic feet of materials, housed in the Book Depository, a state-of-the art, climate-controlled compact shelving facility on Kenny Road.

It was partly because of Goerler that the Archives made the move. When the Libraries was planning to construct a building for the overflow of books from Thompson and departmental libraries in the late 1980s, Goerler suggested the Archives be included in the space. Despite how slowly the wheels of bureaucracy usually move at such a large institution, it apparently took a mere 24 hours for the powers-that-be to determine how good an idea it was and approve the addition, according to a 2011 oral history interview with then-Libraries Director William Studer. 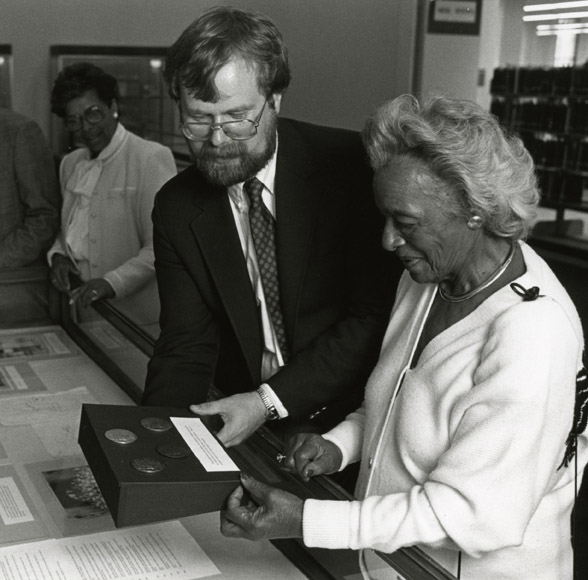 The Archives moved to the Book Depository when it opened in 1995. The facility houses not only University records, but also high-profile University Archives collections like the Jesse Owens Papers and the Woody Hayes Papers, which Goerler was responsible for bringing to the Archives. And Goerler helped found two other valuable special collections: the Byrd Polar Research Center Archival Program in 1990 and the Ohio Congressional Archives in 1998. (That collection started with the John Glenn Archives.) Both collections are housed at the Depository.

Goerler also started the University Archives’ oral history program, capturing reflections and recollections of hundreds of Ohio State University faculty, staff, and students, and at least four of its former presidents.  He and his wife, Sharon, generously created an endowment to support the Archives’ oral history program. He began an OSU History class to teach undergraduate students more about their university (now there’s usually a waitlist), and he made countless presentations to alumni clubs throughout the nation while serving as University Archivist. 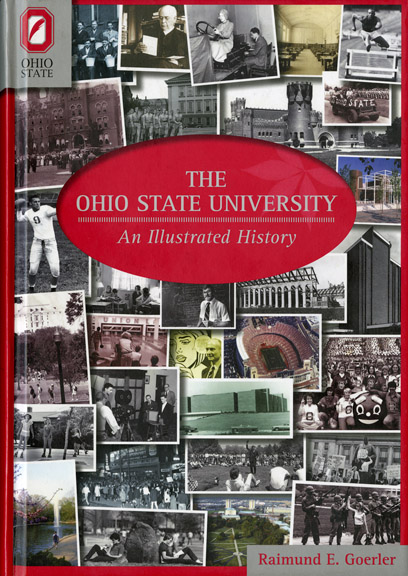 His contributions were not limited to the Archives: He served as Associate Director of Special Collection for the Libraries from 2000 to 2010, and he was interim director of the Libraries in 2009, a pivotal period that included the completion of the renovation of Thompson Library and the seismic move of its staff and collections from their temporary digs on Ackerman Road back into the newly renovated building.

Throughout his career, Goerler authored a number of articles and books related to OSU history and polar history. His most notable – for the University Archives – is The Ohio State University – An Illustrated History, published in 2011 and now in its third printing. The book is an essential resource for researchers, (and the Archives staff when there’s a quick reference question to answer), and an ongoing source of income for the Archives: Goerler generously directed the royalties of the book to the University Archives.