Twelve Days: Archives donors deliver the goods – in so many ways

December 18, 2014 / drobik.5@osu.edu / Comments Off on Twelve Days: Archives donors deliver the goods – in so many ways

(In celebration of the University Archives’ upcoming 50th Anniversary in 2015, we bring you “The Twelve Days of Buckeyes.” This is day 9 in a series of 12 blog posts highlighting the people who were instrumental in the creation and growth of the Archives.) 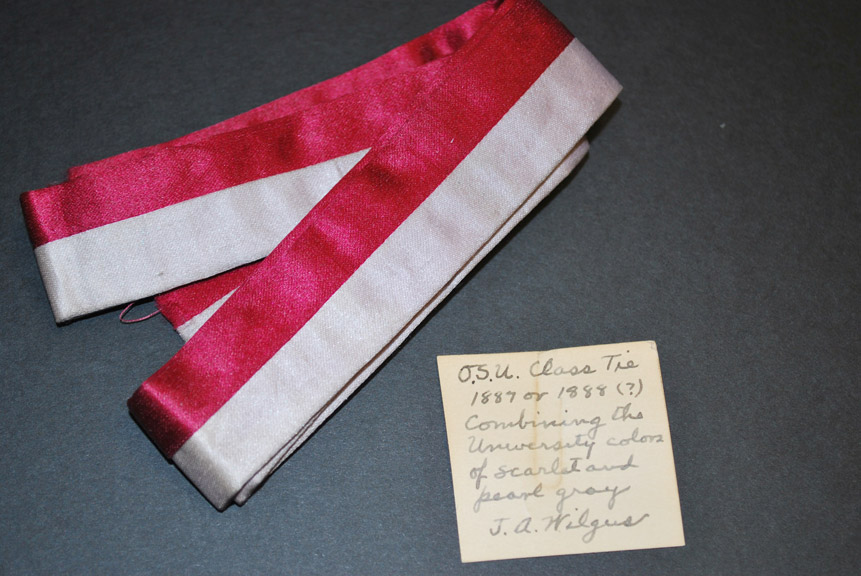 We’d like to focus today on the unsung heroes of Archives everywhere: those individuals who decide the “old stuff” in their lives needs a more permanent home. So they take on the sometimes herculean task of finding just the right place and sending the materials there.

Take, for instance, Peggy Wymore. She has absolutely nothing to do with OSU, except for the important fact that her grandfather, James Alva Wilgus, earned his bachelor’s and master’s degree from OSU (1888 and 1889, respectively). He then spent many years in education, retiring from the State Teachers’ College in Wisconsin in June 1939 as a professor of History and Social Sciences. He died two months later. 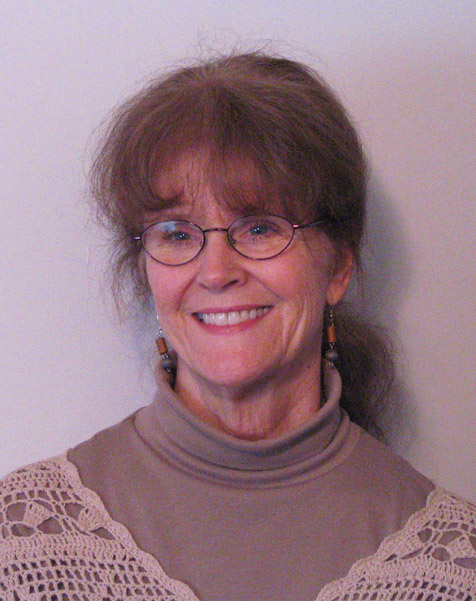 So his OSU materials – the coolest thing is his scarlet-and-gray class tie –survived nearly 75 years, thanks to the Wilgus family, including Peggy, who was the last one to have these items in her possession and who contacted the Archives to see if we would want his things. We sure did. And, in fact, we were so thrilled, we wrote a blog about him.

Luckily for the Archives, there are many people like Ms. Wymore who can’t bear to discard such items as the class tie – an item we had never seen before – and they do the legwork to track down the Archives to ask if we want the materials. They carefully pack these items, often providing much-appreciated detailed explanations, then ship them to the Archives, often at their own expense, from all over the country. 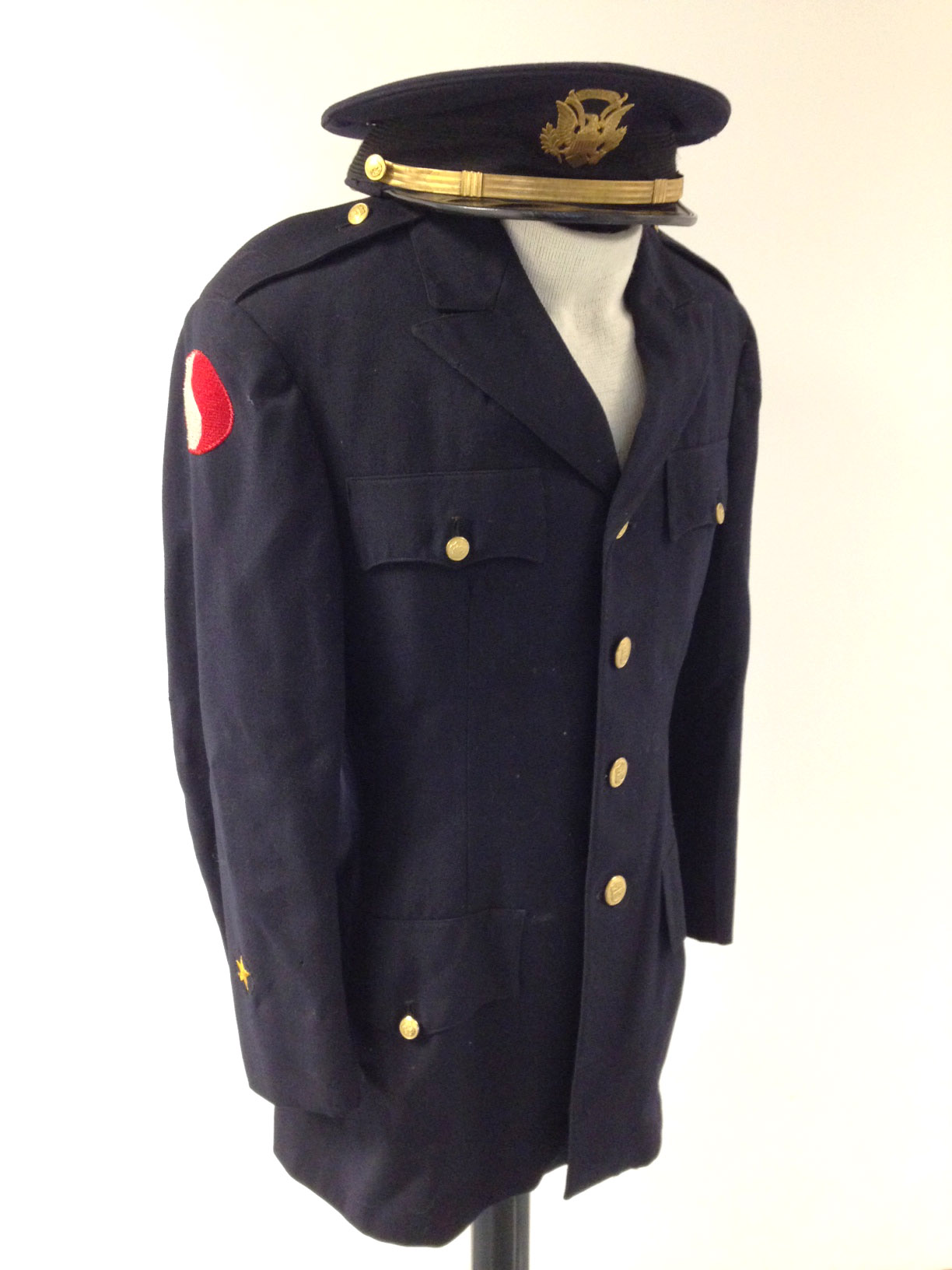 It is the explanation of an ROTC unifom that makes this particular donation stand out. In 2006, John Naddy donated the jacket, pants and hat he wore while he was in ROTC at OSU in the early 1940s. Back then, all male students had to take military science classes; however, at this particular time their training took on extra meaning since war was imminent. For Naddy, as with many young men of his generation, he recounted his story very matter-of-factly in a letter that is so priceless in its charm, and what it divulges about that time period, that we urge you to read it for yourself.

Then, there are the donors for whom it’s a no-brainer on where their precious keepsakes should end up permanently. Arthur “Jerry” Grundies was one such donor. Grundies was a varsity tackle who played OSU football under Coach Francis Schmidt from 1938 to 1940. 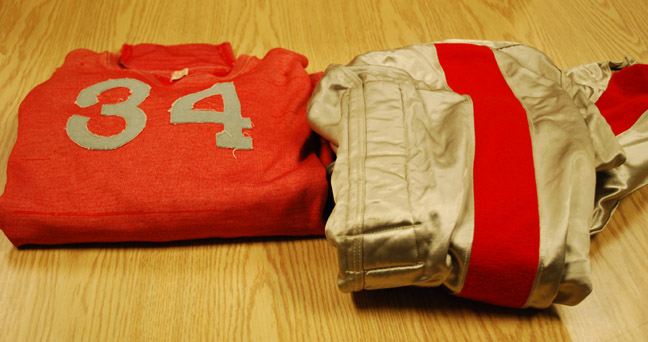 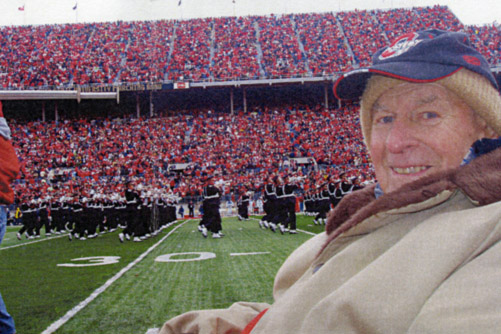 Grundies at a 2008 football game

Grundies didn’t play professionally after college; he went to war instead, serving in the U.S. Army in Italy and North Africa, and earning a Purple Heart and Bronze Star along the way. After the war, he became a sales representative for various oil companies in the region until his retirement. In 2002, Grundies donated his football uniform to the Archives – it’s the earliest version we have and one of the most often displayed items in our collection. He had a strong connection to OSU, so strong that the Archives received holiday cards from him until his death in 2010.

No matter why people donate materials to the Archives, we are extremely grateful that they do. Such artifacts are so helpful in helping us demonstrate through exhibits and tours the history of Ohio State, and we look forward to sharing them with our patrons and visitors for many years to come.

Twelve Days: From production to preservation, film pioneer left his mark on Archives