We were saddened to hear of the death of former OSU fencing coach, Charlotte Remenyik, on December 21, 2011. 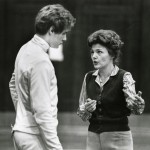 Remenyik gives a coaching tip to a fencing student, 1981

Her success as a coach at OSU was just the tip of the iceberg of what was a fascinating life:

Remenyik was born on Sept. 5, 1934, in Hungary, an only child to parents of the upper middle class of that country. She learned to fence at a young age. In an interview conducted by OSU Quest in 1981 she said: “I love sabre fencing the best…Although they don’t allow women to compete in sabre or epée, only foil, that is what I grew up with in Hungary—in Transylvania. My cousins, all boys, would come home from military school on vacation, and they would practice their sabre fencing. I was the youngest cousin and the only girl, and they would say, ‘No, Charlotte, you cannot do that. You are a girl, and you are too small.’ I guess that irked me enough to go out and learn sabre.”

Remenyik was just five years old when World War II broke out in Europe. When the war ended, the Russians occupied Hungary, and “we ended up on the wrong side of the peace treaty,” she said in a 2001 OSU Archives oral history interview. “That changed life drastically. During the war, we had shortages of food, bombings and air-raids, but life until 1945 was pretty good for me. [The change] started when I was declared the enemy of the state because of my birth, because of my family.”

Remenyik fled Hungary after the revolution in 1956. When she arrived in Chicago with her husband she knew she wanted to teach fencing, but she had only a high school education and spoke only Hungarian. “My husband got a job in Chicago in a factory and I also worked in the same factory for a while,” she recounted in the oral history interview. “Later I advanced to the office because I knew how to add, subtract, multiply and divide.  I did payroll.  Didn’t need to speak a lot of English. Chicago was like outer Siberia as far as fencing was concerned.”

She quickly learned English, though, and set about getting an education that would make teaching fencing a reality. Remenyik received her associate’s degree from W.R. Harper College in Illinois in 1971, then she went to Northwestern University where she received her bachelor’s degree in physical education in 1973. All the while Remenyik continued to compete throughout the Midwest, including ranking 11th at the U.S. Olympic Trials in 1972. After graduation she became the women’s fencing coach at Northwestern, where her team won championships under her leadership for five years. The Remenyik Open competition at Northwestern is named in her honor. 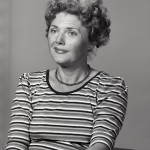 In 1978 Charlotte Remenyik came to Ohio State to coach the OSU women, which a few years later would include her daughter, Csilla. In the fall of 1980 she made OSU history by becoming the first woman to coach a men’s varsity team—and as the first woman to coach both the men and the women concurrently. Both teams did very well, even though at that time many of the men were recruited from the beginning fencing classes at OSU. The women’s team, on the other hand, had scholarships, which attracted top fencers to OSU. Under Remenyik’s leadership from 1981 to 1984, the women won the Big Ten title each year, and the men placed third in the 1985 Big Ten Championships. In all, her programs turned out sixteen All-Americans. She also served on the NCAA Sports Committee for Fencing (1981-86), designing the format for the women’s NCAA championships. It was later used as the model for the men’s championships.

Twelve Days of Buckeyes: Win or lose, we’ll always be nuts about OSU

Carl L. Dennison: the man behind the sweater