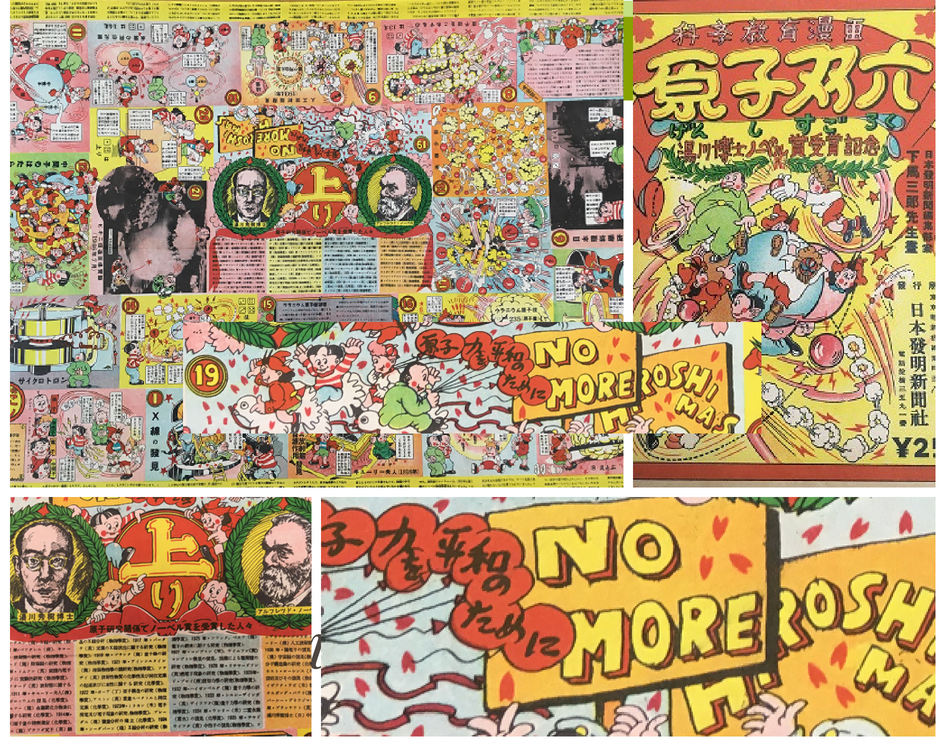 Similar to “snakes and ladders,”  sugoroku is a game played by rolling a die and racing to the final goal, or “agari” (上り).  Pictured above, this particular “game board” is actually a thin fold-out sheet of paper that sold for 25 Yen and was published in 1949 shortly after Yukawa received the Nobel Prize.  Written in simple Japanese, it aims to teach the history and fundamentals of atomic science to school-aged children.

The classic game of ban-sugoroku (a type of backgammon) came to Japan from China in the 8th century.  Eventually supplanted by a type of picture board (e-sugoroku), the game became especially popular in Japan during the Edo period (1600-1868) with the rise of woodblock print technologies.  Originally intended as a didactic tool that taught Buddhist theology, the sugoroku game eventually came to emphasize the more playful themes of the floating world (ukiyo) and the often irreverent urban culture of the merchant class.

During the Meiji period (1868-1912), as Japan aimed to modernize and industrialize  (pursuing the slogan fukoku kyōhei, “rich country, strong military”), the sugoroku picture boards came to emphasize the military, and children and women’s education.  As suggested with the wartime game board illustrated by Otake Kokkan, publishing companies often created sugoroku to infuse its players with national pride during wartime.

The Genshi Sugoroku however shows a transition in educational purposes in the immediate years after World War II.  In contrast to the game boards that were commonly published during Japan’s pre-war years, this colorful spreadsheet advocates for peace and “No More Hiroshimas.”  Yukawa Hideki and Alfred Nobel (1833-1896) are illustrated at the center of the sugoroku board encircled by rich descriptions of notable milestones in the global history of atomic science. The slogan  “No More Hiroshimas” next to the final goal speaks to Japan’s horrible experiences with the world’s first atomic bombs dropped on Hiroshima and Nagasaki.  The bombs notoriously brought about Japan’s unconditional surrender following the deaths of at least 129,000 people, most of whom were civilians.

Outside of The Ohio State University Libraries, two other research libraries in the world are known to hold this historic print, listed on WorldCat.

The Cotsen Library, at Princeton University, is among these and offers an interesting essay about this piece sugoroku as well as several others:

The OSU Libraries has various materials written by Yukawa Hideki, including the following:

Creativity and intuition; a physicist looks at East and West by Yukawa, Hideki translated by John Bester.  (New York, 1973).