This is the second of two blog posts on Fujihiko Hosono and his book Heroes Come Back (2013). The first post provides background information on Hosono and how this interview came to take place. To read Part 1, please click here. 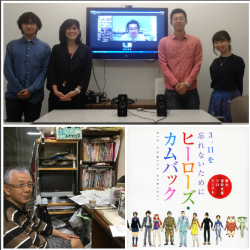 Early in the morning on October 6, Japanese Studies staff and student workers [Ann Marie Davis, Amy Hwang (not pictured), Yasuhiro Aihara, Ryo Kudo, and Chihiro Hosoi] conducted a rare Skype interview with the renowned manga artist Fujihiko Hosono in Tokyo.  Dr. Daisuke Sato of Tohoku University, who helped organize the interview, also participated from his office in Sendai City.  The group decided to focus their discussion on the ideas and inspiration that led Hosono to create Heroes Come Back.  What follows is a summary of the interview, which was conducted originally in Japanese:

Like most Japanese people witnessing the events from Tokyo, Hosono said he was affected by the Great East Japan Earthquake.  As a result, he had a strong desire to help those impacted by the calamitous event. He recalled thinking to himself, “What can I do to support affected people as a manga writer?” This question was the trigger for the birth of Heroes Come Back. Hosono decided to approach various manga writers and explain his plan. In this way, he recruited the artists who contributed to Heroes Come Back. He said he had never experienced such work before and called it a “once-in-a-lifetime experience.”

The concept of Heroes Come Back is that “Heroes can offer support to the affected area” by coming together in one comic book. “The first priority was [to create a book that made] readers eager to read.” Fortunately, many manga fans reacted as desired; they celebrated and were inspired by the new stories of popular comics. “At that time, most Japanese people shared the idea of wanting to do something for people in the affected area.” According to Hosono, in fact three-fourths of Japanese people have donated some money to victims of 3.11. It is said that the total amount of donations is more than 440 billion Japanese yen (which is equal to about 4 billion U.S. dollars).

The Great East Japan earthquake was a significant event for the people of Japan. Hosono said that “Japanese wanted to help Japanese [who were affected by the disaster]. I guess all support relating to this earthquake converged with this theme. I do not think [this theme in] Heroes Come Back was unique [from other ways of thinking] in this respect … Japanese society is greatly affected by major events. In this way, manga is naturally influenced by changes in society [too].” According to Hosono, incidents that change society like great earthquake(s) can influence the contents of comic books.  They can reflect what happened in society and what society is.  As a result, comic books can have a tremendous impact on people.

After the earthquake occurred, there were a lot of manga writers who worried about what they could do and whether it was a good time to draw manga or not. Hosono said, “It is heartening that there were so many manga writers who wanted to do something, and to express themselves in some way. All of them, including other Japanese people, wanted to help out somehow. My wish is for such attitudes to remain unchanged in the future.”

The Ohio State University Libraries have five series of comic books written by Fujihiko Hosono. For those who are interested, his works can be found via the following links: