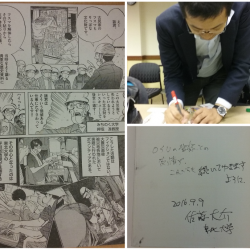 Last semester, Japanese Studies at OSU Libraries had a unique opportunity to speak with a leading cartoon artist from Japan, Fujihiko Hosono (細野不二彦). A major figure in Japan’s comic book industry for over 30 years, Hosono made his debut in 1979 with the science fiction series for young adults called Crusher Joe (クラッシャージョウ). Later he published a number of other series including Gallery Fake (ギャラリーフェイク).

Among Hosono’s most recent contributions was a compilation called Heroes Come Back (3.11を忘れないために ヒーローズ・カムバック, 3.11 o Wasurenai Tame ni Hiiroozu Kamubakku), a book of manga that features a special edition of Gallery Fake as well as the works of other well-known artists including Masami Yuki, Sensha Yoshida, and Rumiko Takahashi.

Hosono decided to spearhead Heroes Come Back roughly two years after Japan’s Triple Disaster on March 11, 2011 (aka 3.11). He dedicated all proceeds from the book to ongoing reconstruction efforts in the affected region of Tōhoku in northeast Honshu. To this day, the region is still recovering from the three major disasters, all of which happened in quick succession: the strongest recorded earthquake in Japanese history (clocking a 9.0 magnitude on the Richter Scale); powerful tsunami waves (reaching heights of up to 133 feet) triggered by the earthquake; and a major nuclear accident, caused by the tsuanmi waves, at the nearby Fukushima Daiichi nuclear power plant.

To raise awareness about 3.11, Hosono brought together seven other manga artists, each of whom contributed new stories based on well-known manga characters in Japan.  In addition to Hosono’s special version of Gallery Fake, his Heroes Come Back features the popular characters Cyborg 0009, Gin no Saji, InuYasha, Kyukyoku Choujin R, Ushio to Tora, and Utsurn Desu.

The rare opportunity to interview Fujihiko Hosono about Heroes Come Back came about through an unexpected series of meetings and introductions following an OSU workshop on “Community Resilience: Planning for and recovering from disasters in Japan and the US,” organized by OSU History Professor Philip Brown in September 2016.  Among the workshop’s participants was Dr. Daisuke Sato (佐藤大介), Associate Professor of History of Tōhoku University, who discussed his work at the International Research Institute of Disaster Science (IRIDeS).  One of his top priorities at IRIDeS has been the preservation of historical and cultural heritage materials from the 3.11 evacuation area.

At the end of the workshop, Japanese Studies Librarian, Professor Ann Marie Davis, gave a short presentation on recent efforts to build a collection of 3.11 Manga at OSU. In addition to discussing the significant body of manga that has been produced in response Japan’s Triple Disaster, her presentation included a hands-on opportunity to peruse and review current and historical manga on major disasters in Japan.

During the Q&A, Dr. Sato revealed that he was one of the main protagonists in one of the comic books that Davis displayed at the workshop: Heroes Come Back!  He opened the pages of the comic book and showed other participants the images of his character in Gallery Fake. It was at this point that Dr. Sato kindly offered to put Professor Davis in touch with the author, Fujihiko Hosono. In addition, Dr. Sato agreed to autograph a copy of Heroes Come Back, which is now preserved at the Billy Ireland Cartoon Library and Museum! Several weeks after the workshop, Dr. Sato helped organize a rare Skype interview between himself, Fujihiko Hosono, Hosono’s publishing agent at Shogakukan (小学館), Professor Davis, and Japanese Studies staff from OSU Libraries.