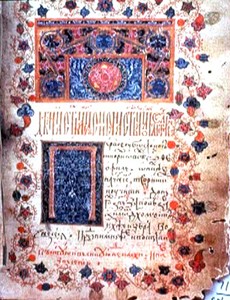 September 18-19, 2015
(Pre-conference reception on the evening of September 17)
The Association for the Study of Eastern Christian History and Culture is pleased to invite scholars of all disciplines working in Slavic, Eurasian, and East European studies to submit proposals for individual papers and panels for its biennial conference, to be held at Rhodes College, Memphis, Tennessee, and The Westin Memphis Beale Street Hotel.Scholars from the U.S.and around the world are welcome.All participants must be members of ASEC.
Proposals for individual papers and panels should be submitted by email to Dr. Randall Poole, Acting Vice President of ASEC (rpoole@css.edu) no later than December 1, 2014.All proposals should include:
–Participant name, affiliation, and email contact information
–For individual papers:title and brief description (50-75 words)
–For panels: panel title + above information for each participant and discussant (if applicable).
Limited funding is available to provide graduate students with assistance for travel expenses.  General information regarding the hotel and meeting, and the conference registration form, will be available after October 1, 2014, on the following website of Rhodes College:
https://in.rhodes.edu/academic/modernlanguages/Pages/Russian-Studies.aspx
ASEC Facebook page
Image Source: Hilandar Research Library slide from Hilandar Monastery Slavic Manuscript 71
Text Source: ASEC listserv, moderated by ASEC Secretary, Eugene Clay

The latest issue of Russian History has been released – and it contains more selected papers from the  second conference of the Association for the Study of Eastern Christian History and Culture (ASEC), “Centers and Peripheries: Interaction and Exchange in the Social, Cultural, Historical, and Regional Situations of Eastern Christianity” that was held at The Ohio State University in Columbus, Ohio, October 5–6, 2007.

Section 3. Community: Social and Perceptual Dynamics of the Center

Charles J. Halperin, “Church Immunities in Practice During the Reign of Ivan IV”

Marlyn Miller, “Social Revolution in Russian Female Monasticism: The Case of the Convent of the Intercession, 1700-1917 ”

Sergei I. Zhuk, “Popular Religiosity in the ‘Closed City’ of Soviet Ukraine: Cultural Consumption and Religion During Late Socialism, 1959-1984”

Amy A. Slagle, “A View from the Pew: Lay Orthodox Christian Perspectives on American Religious Diversity”

Section 4. Division and Inclusion: Defining Center and Peripheries of Orthodoxy

J. Eugene Clay, “Russian Spiritual Christianity and the Closing of the Black-Earth Frontier: The First Heresy Trials of the Dukhobors in the 1760s”

Page Herrlinger, “Trials of the Unorthodox Orthodox: The Followers of Brother Ioann Churikov and Their Critics in Modern Russia”

Source of the Russian History 40.2 table of contents: Lawrence Langer (University of Connecticut) via the Early Slavic Studies listserv.

The Association for the Study of Eastern Christian History and Culture (ASEC) held its fifth biennial conference at Georgetown University, Washington, DC, on March 8-9, 2013.

Session 5: Vladimir Solov’ev and Russian Orthodoxy (Philosophy and the Church)

Session 6: Christianity in the World

Session 7: Icons and the Visual at the Center of Religious Controversy

Session 8: Orthodoxy Amidst the “Other”

The Association for the Study of Eastern Christian History and Culture (ASEC) held its fifth biennial conference at Georgetown University, Washington, DC, on March 8-9, 2013. The theme of the conference was “Antecedents and Subsequents of Iosif Volotsky: Exploring Eastern Christian Concerns.”

Over 40 participants and attendees congregated on Georgetown University’s historic campus for two days of intense historical, philosophical, and theological discourse during eight panels of scholarly presentations as well as a keynote lecture and numerous social gatherings. 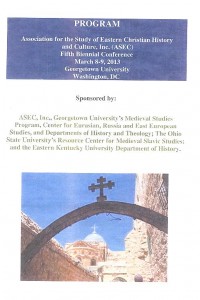 Session 3: Tradition and Change in Monasticism through the Centuries

Many academic organizations find it convenient to meet at their annual national conferences. Among the association meetings included on the schedule for this year’s Slavic, East European and Eurasian Studies convention (ASEEES) in New Orleans are:

The Association for the Study of Eastern Christian History and Culture (ASEC, Inc.) will hold its fifth biennial conference at Georgetown University in Washington, DC, on March 8-9, 2013.

The theme of the conference is “Antecedents and Subsequents of Iosif Volotsky: Exploring Eastern Christian Concerns” (2015 marks the 500th anniversary of the death of Iosif Volotsky, founder of the Iosif-Volokolamsk Monastery), yet it is designed to “embrace topics from any period, and all regions related to Eastern Christian groups…. The topic is broadly conceived to address the interests and concerns of Iosif, a monastic reformer, whose life and work influenced the religious culture of Muscovy as well as modern scholarship of his period. Iosif’s interests encompassed the multi-faceted issues of religious and spiritual life and ranged from monastic reform to patristics, liturgics, education, administration, spirituality, heresy, and secular Christian life, among others.”

Registration is $50 ($25 for graduate students) and participants must be members of ASEC by the time of the conference.

Source: “Call for Papers” issued by the ASEC.