The Hilandar Research Library has received a number of books as gifts in kind this spring from various donors. Among the donors are researchers who have worked with HRL materials both recently and in the past, anonymous gifts from the local Greek Orthodox community, donors who are adding to existing collections, as well as a colleague once removed who want to find a good home for her books. We greatly appreciate the spirit of the support and patronage that all offers of book donations imply, but we are limited by space and our collection development policy by what we can accept. Happily, the books offered to us below were ones we did not already have and all of them enhance our collection of secondary source material. Below is a selection of the most recent donations. 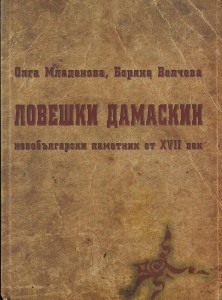 Loveshki Damaskin: A “Vernacular” Monument from the 17th Century (Sofia, 2013)

Olga Mladenova, professor in the Department of Linguistics, Languages, and Cultures at the University of Calgary, Canada, was invited to The Ohio State University in March 2013 to present the 16th Annual Kenneth E. Naylor Memorial Lecture in South Slavic Linguistics. Her talk “The Rise of Modern Bulgarian Literacy in the Seventeenth Century: New Facts and Interpretations,” focused on the texts found in the Bulgarian damaskini, compilations of excerpts from religious and liturgical works that are written in the vernacular of the 17th-18th centuries, rather than in Church Slavonic. While here, she spent a few days in the Hilandar Research Library looking at available resources on the damaskini, which she has incorporated into this gift book, Ловешки дамаскин новобългарски паметник от XVII век, co-authored by Boriana Velcheva (Sofia, 2013). Professor Mladenova vowed to return! She spent 10 days here last month, continuing her work on the damaskini, so there will likely be a companion volume to the Loveshki Damaskin in the near future. 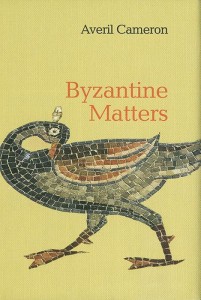 We received two books as part of an anonymous donation from someone we know to be from the Greek Orthodox community here in Columbus, Ohio. One is Averil Cameron‘s most recent publication, Byzantine Matters, five essays on controversial themes related to Byzantine studies. The second book is the exhibition catalogue for Treasures of Mount Athos, co-sponsored by the Holy Community of Mount Athos, the Organization for the Cultural Capital of Europe (Thessaloniki 1997), and the Museum of Byzantine Culture of the Greek Ministry of Culture. The exhibition catalogue is in English, and full of beautiful photographs of the items that were on display. 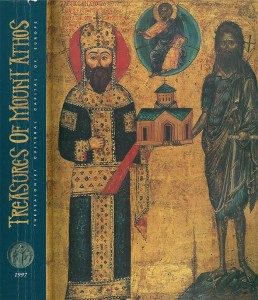 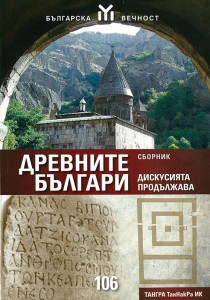 Tsvetelin Stepanov (Centre for Cultural Studies, Faculty of Philosophy, Sofia University, Bulgaria), who spent some time in Spring 2005 conducting research in the Hilandar Research Library, sent us his latest book: a selection of articles compiled and edited by him, entitled The Ancient Bulgars: The Discussion Continues (= Bŭlgarska vechnost 106) (Sofia, 2014). Besides Stepanov’s introduction (7-15) and article on the origin of the Bulgarian aristocratic titles – “(Indo-)Iranian, Turkic or Other?” (119-134), this compilation includes articles by Atanas Stamatov on the Christianization of  the Armenian Bulgars (16-26); Petŭr Goliiski on Bulgars near the Caucasus during the 2nd-5th centuries according to Armenian sources (27-35), Boris Zhivkov on the legend of Kubrat (36-49), Aleksandŭr Aleksiev-Khofart on Indo-Iranian mythological and religious traces in several Old Bulgarian monuments (50-65), Todor Chobanov on pagan temples in Danube Bulgaria (66-90), Oksana Minaeva on the legacy of the Sassanid culture and its parallels in Bulgarian metalwork during the 7th-9th centuries (91-118), and Alexandŭr Moshev on new epigraphical data on the presence of the Bulgars in the Black Sea area in the 2nd-5th centuries (135-141).

A scanned color version of Royal MS 1 D VIII, volume 4 – the New Testament – of Codex Alexandrinus, a 5th-century Greek Bible in four volumes, is available in the “Digitised Manuscripts” section of the British Library’s website.

The various owners’ inscriptions described on the webpage detail the fascinating journey of this codex from Constantinople to England through the hands of Athanasius III, Patriarch of Alexandria, to James I, King of England, Scotland and Ireland. 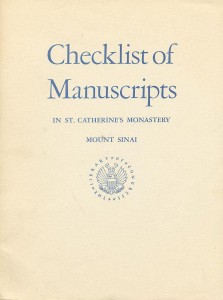 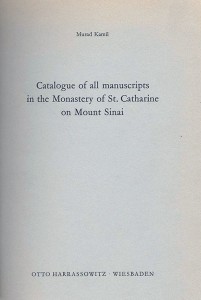 Several recent research queries have referenced the Greek manuscripts of Hilandar Monastery. Below is a selected bibliography of descriptions of these manuscripts. If you know of additional publications about the Greek codices, please let us know. 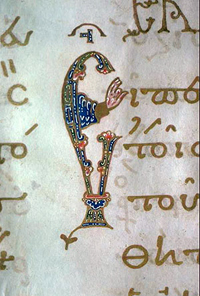 Tetraevangelion, Illuminated letter “E” from the end of the 13th cent. 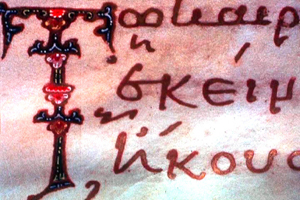 Litsas, Efthymios. “The Mount Athos Manuscripts and their Cataloguing.” Polata Knigopisnaia: an Information Bulletin Devoted to the Study of Early Slavic Books, Texts and Literatures 17-18 (December 1987): 106-118. 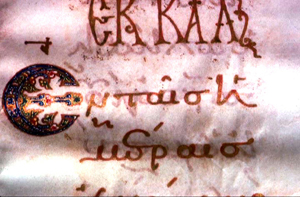 Thanks to Georgi Parpulov (Oxford) for bringing this publication to our attention.

Image source: Photos of illuminated letters from the collection of  Hilandar Monastery Greek Manuscripts by Mateja and Predrag Matejic, 1975.