Recent acquisitions to the stacks of the Hilandar Research Library include two works devoted to Saints Cyril and Methodius, the Apostles to the Slavs. 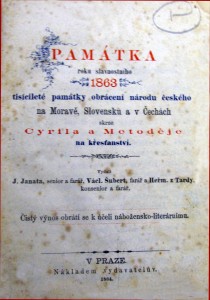 The first, formerly held by the Litchfield Public Library in Litchfield, Minnesota, and offered to academic libraries courtesy of Gordon B. Anderson* is Památka roku slavnostního 1863 tisícileté památky obrácení národu českého na Moravě, Slovensku a v Čechách na křesťanství / Commemoration of the Millennial year 1863 Anniversary of the Christianization of the Czech People in Moravia, Slovakia and in the Czech Republic by J. Janata, Václav Šubert, and Heřman z Tardy, published in 1864 in Prague. The book commemorates the one thousandth anniversary of SS. Cyril and Methodius’ mission to Great Moravia. Written by priests, the book contains poems, a history of the conversion of the Western Slavs to Christianity which began in 863, a section devoted to the lives of Saint Cyril and Saint Methodius, as well as notes on the history of Protestantism in Bohemia, and a description of the most important events of the Evangelical Church in Bohemia in the year 1863. The publication is interesting from theological, historical as well as linguistic and literary perspectives. 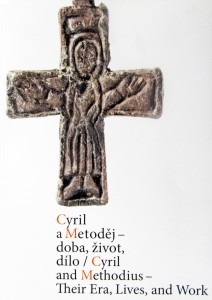 The second publication, a gift of Václav Čermák from the Institute of Slavonic Studies of the Academy of Sciences, Czech Republic, is the bilingual Czech-English Cyril a Metoděj – doba, život, dílo / Cyril and Methodius – Their Era, Lives, and Work, published by Moravské zemské muzeum in Brno in 2013. Besides addressing the importance of the Cyrillo-Methodian mission and its immediate legacy, this work also focuses on reflections of the Cyrillo-Methodian traditions in Czech literature, theater, music, and society. The publication specifically examines Cyrillo-Methodian themes in modern Czech literature and in Czech folk culture. It offers insight into the long-lasting influence of the “Enlighteners of the Slavs” on the culture and society of Czechs and Moravians.

The Research Center for the Preslav Literary School at the “Bishop Konstantin Preslav” Shumen University is organizing an international symposium “SS. Cyril and Methodius and the Bulgarian Golden Age,” which is dedicated to the 1150th anniversary of the creation of the Slavic alphabet and the 1120th anniversary of the establishment of Preslav as the capital of Bulgaria, on November 1-3, 2013, in Shumen, Bulgaria. The symposium is co-sponsored by the Institute of Literature of the Bulgarian Academy of Sciences, the Department of Old Bulgarian Literature, and under the patronage of the President of Bulgaria. 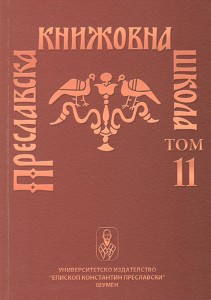 Scholars are asked to prepare a 15-minute presentation for the symposium. The paper submitted for publication, however, must be no more than 20 standard pages, submitted in Word 2007 by email or CD with an accompanying PDF document (to preserve the various fonts needed) no later than September 3, 2013. The proceedings will be published in volume 14 of the journal Преслав книжовна школа (‘Preslav Literary School’).

Welcome to ScriptoriaSlavica, the blog of the Hilandar Research Library and the Resource Center for Medieval Slavic Studies at The Ohio State University Libraries, Columbus, Ohio. It is appropriate that this blog is launched on May 24th, the feast day (New Style) of SS. Cyril and Methodius, “Apostles to the Slavs” (or “Enlighteners of the Slavs”), as ScriptoriaSlavica is devoted to the study and preservation of medieval Slavic manuscripts and culture. 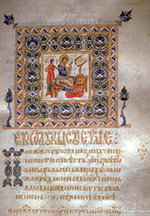