The 44th Annual Association for Slavic, East European and Eurasian Studies (ASEEES)* Convention is being held in New Orleans, November 15-18, 2012. This year’s conference theme is “Boundary, Barrier and Border Crossing.”

Among the panels listed in the convention program, one that promises to be of interest to medieval Slavic scholars is Slavia Orthodoxa & Slavia Romana: A Round Table in Memory of Professor Riccardo Picchio, chaired by Paul Alexander Bushkovitch (Yale), with participants Giovanna Brogi Bercoff, Harvey Goldblatt (Yale), Michael A. Pesenson (U of Texas at Austin), and Marina Swoboda (McGill, Canada). (See page 13 of Cyrillic Manuscript Heritage 30 for Predrag Matejic’s obituary of Riccardo Picchio.) 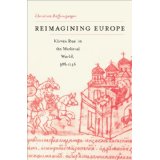 *formerly, the American Association for the Advancement of Slavic Studies (AAASS)

Found in the Archives: Newsletter of the Hilandar Project

Among the archives of the Hilandar Research Library and the Resource Center for Medieval Slavic Studies are copies of a newsletter that was published sporadically from 1979-1986. The inaugural issue of the “Newsletter of the Hilandar Project at The Ohio State University” was edited by Charles E. Gribble, now professor emeritus of the OSU Department of Slavic and East European Languages and Cultures. Issue number 1 appeared in January 1979 with the following stated purpose: 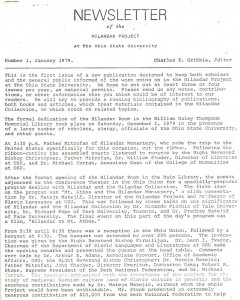 “This is the first issue of a new publication designed to keep both scholars and the general public informed of the work going on in the Hilandar Project at The Ohio State University…. We will try to provide a running bibliography of publications, both books and articles, which treat materials contained in the Hilandar Collection, or which touch on related topics.”

The issue includes a description of the formal dedication of the Hilandar Room in the William Oxley Thompson Memorial Library on December 2, 1978, and reproduces the remarks made on that occasion by Father Mitrofan of Hilandar Monastery, Riccardo P. Picchio (Yale University), Richard Pope (York University, Toronto), and Dr. Predrag Matejic. The speech that Father Mitrofan gave at the banquet that evening is also included in this issue. 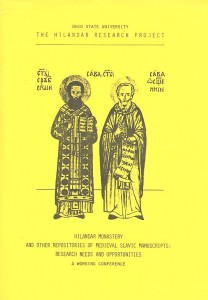 The Very Rev. Dr. Mateja Matejic presented an update on the Hilandar Research Project, representatives from various countries reported on the status of Slavic and medieval studies, and recommendations regarding the future work and development of the Hilandar Research Project were made by working groups composed from 45 scholars of 31 institutions of higher education in North America and Europe.