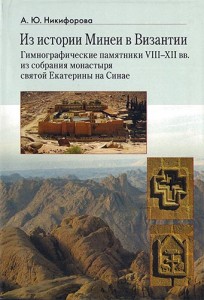 Nikiforova examines the Sinai Greek Tropologia and Menaia from the 8th-16th century, housed in both St. Catherine’s and in Moscow’s State Historical Museum and Russian State Library. Manuscripts from other Russian repositories, the Austrian National Library (Vienna) were also consulted, as were microfilms held in the Patristic Greek Institute (Vlatadon) in Thessaloniki of manuscripts from Philotheos Monastery on Mt. Athos.

Nikiforova’s book includes a preface, three chapters (“Menaia before Menaia: the Tropologia”; “The Birth of the Menaia: Sinaiticus gr. 607, 9th-10th cent.”;
“Menaia 9th-12th centuries”), and extensive appendices, such as a description of one of the early Greek Tropologia, the hymnographical texts found in a daily readings from a Menaion, and calendars of saints with information about the authors and hymnographers of Menaion texts.

Books from the Russian National Library