February 19, 2018 / Yuka Itoh / Comments Off on New in the Collection: Georges Ferdinand Bigot and Keikan no tabō (警官のたぼう)

We are proud to announce the recent acquisition of Keikan no tabō (警官のたぼう), now available at the Billy Ireland Cartoon Library and Museum! 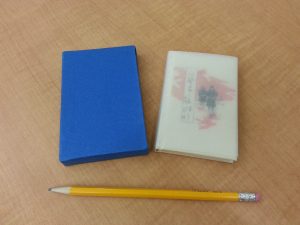 The book, Keikan no Tabō, also known by its French title La journée d’un policeman à Tokio : album humouristique, is a collection of comedic comics that follows the everyday lives of Japanese policemen during the Meiji period (1868-1912).  Penned by Georges Ferdinand Bigot,  the comics are written in French and touch on a number of issues of the time, often highlighting Japan’s process of modernization and Westernization. The work provides a window into Japan’s period of rapid change from bakufu rule, characterized by an isolated feudalistic society, to the start of the modern society we see today. 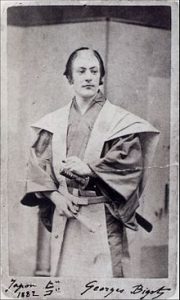 The creator, Georges Ferdinand Bigot, was a French cartoonist living in Japan during the Meiji period as an oyatoi gaikokujin (御雇い外国人), or foreign adviser, hired by the Japanese government to assist in the modernization of Japan.  Although Bigot remains relatively obscure in his home country of France, his work is well-known in present-day Japan and provides a unique perspective on Meiji Japan through the eyes of a European ex-pat.

Bigot first gained an interest in Japan while studying at the Ecole des Beaux-Arts as a teenager.  He later saved enough money to move to Japan, where he was hired to teach water color painting at the Imperial Japanese Army Academy. He later taught French language at a private school and traveled around the country.  In 1887, he published the satirical magazine: “Tobae,”  in which he depicted everyday Japanese life while also satirizing Japanese politicians and criticizing the darker sides of Japan’s westernization. In 1895, he married and had a son, but decided to return to France by 1899. He continued cartooning until his death in 1927. Like many great artists, much of his acclaim grew posthumously.

His most famous piece, ”Une partie de pêche,” (pictured below) is commonly found in Japanese history textbooks. It depicts two men (representing Japan and China, respectively) trying to catch a fish (symbolizing Korea) while another man in the background (labeled Russia) eagerly observes. The drawing caricatures the major regional powers and their roles in the Sino-Japan War (1894-95).

For more resources of foreigners living through Meiji Era Japan, please check out some of these OSUL resources:

Mehl, M. (2005). Private academies of Chinese learning in Meiji Japan: the decline and transformation of the kanguku juku. Copenhagen: NIAS.