September 6, 2015 / johnson.60@osu.edu / Comments Off on Monument to Napoleon, Ljubljana, Slovenia

An obelisk stands on Trg francoske revolucije (French Revolution Square), at the juncture of Rimska cesta (Rome Avenue) and Vegova ulica (Vega Street – in honor of the mathematician Jurij Vega*). A native New Orleanian would immediately recognize the head of Napoleon wearing a laurel wreath on the side of the obelisk. Napoleon designated Ljubljana the capital of his “Illyrian provinces,” 1809-1816, and the monument is thus known as the “Illyrian Monument.” 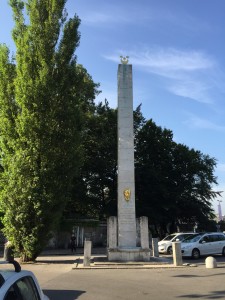 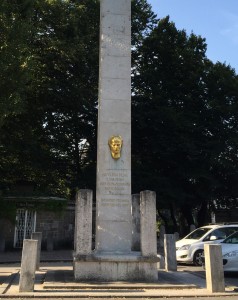 A local Ljubljana guide book notes that the obelisk “was erected in 1929, 120 years after the establishment of the Illyrian Provinces…. built of marble from the Croatian island Hvar. A bronze half moon with three stars is engraved at the top, and verses, a French inscription dedicated to an unknown hero and Napoleon’s head … are engraved on the sides.”* 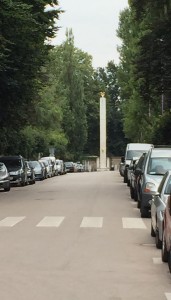 View of the Illyrian Monument from Kongresni trg (Congress Square)

Opened in 1901, “Dragon Bridge” was originally named for the Hapsburg Emperor Franz Josef I, and the dates on the bridge commemorate his reign. The bridge was renamed in July 1919.

The dragon, which is the symbol of Ljubljana, is said to originate with the story of Jason and the Argonauts, with the association to St. George and the Dragon as a later interpretation. 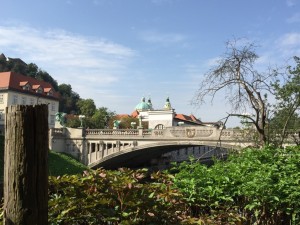 Span of Zmajski most, showing the dates of Emperor Franc Jozef I’s reign (1848-1888) with the Stolnica sv. Nikolaja (Cathedral of St. Nicholas), located on Ciril-Metodov trg (SS. Cyril and Methodius Square), in the background. 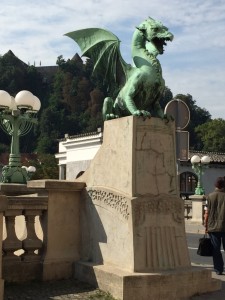